The Threats Are REAL and They're Growing

You know I've been talking about space warfare for years now.

Take this article I wrote in February 2019, for example.

"Russia and China have secretly developed weapons to blind and immobilize our military and paralyze American services and institutions," I wrote. "In fact, China was developing and testing satellite-killing weapons as far back as 2007."

Well, I hate to say it, but things have gotten worse since then.

You know they have because the very threats that I warned about years ago have leapt off the pages of the Outsider Club, where they were dismissed as hyperbole and speculation, and into The Washington Post, where they're now considered novel and legitimate.

Take a look at this headline from Tuesday...

I guess it's a "shadow war" since the mainstream media just discovered it.

"The threats are really growing and expanding every single day. And it’s really an evolution of activity that’s been happening for a long time," Gen. David Thompson, the Space Force’s first vice chief of space operations, pointed out to the intrepid journalists at WaPo. "We’re really at a point now where there’s a whole host of ways that our space systems can be threatened."

Clearly, the general and I are on the same page here. Russia and China have been targeting our satellites for more than a decade so this isn't new.

What is new, though, is the sophistication and frequency of the attacks.

That is, when Russia hit one of its old satellites with a missile last month, it was the first successful test of the country's anti-satellite (ASAT) system, known as Nudol, after roughly a dozen tries.

Beyond that, General Thompson told The Post that Russia and China are attacking U.S. satellites "every single day." These attacks use a variety of means, including lasers, radio frequency jammers, and cyber attacks. 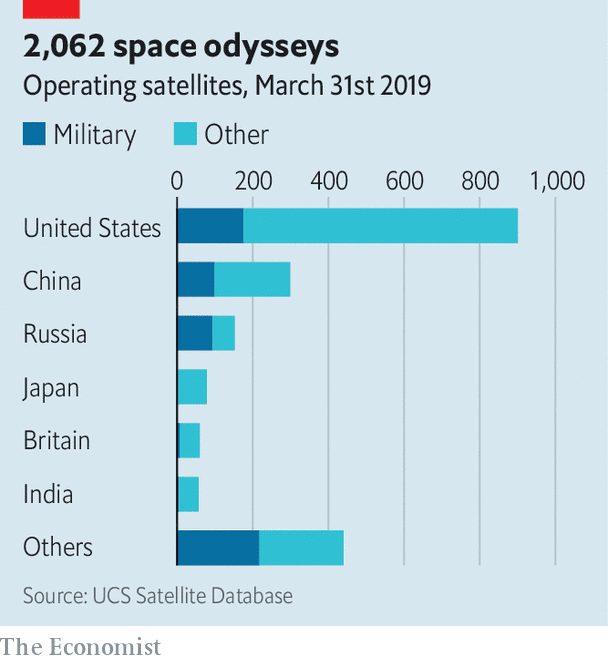 Thompson also pointed out that China in particular, is racing ahead. It's already deployed a "couple of hundred" intelligence, surveillance, and reconnaissance satellites, and it's now putting satellites into space at twice the rate of the United States.

That means China will surpass the United States in capability in space in a few short years.

"They're catching up quickly," Thompson warned. "We should be concerned by the end of this decade if we don't adapt."

But it's not just being used for reconnaissance.

Last year, I talked about Project Guanlan, which means "watching the big waves."

This is a space-based laser weapon that China hopes will neutralize the threat of U.S. submarines in the Pacific.

That's more than twice as far as sunlight goes and far deeper than previous attempts by the United States and Russia.

To accomplish this, the weapon uses high-powered laser beam pulses of varying frequencies, or colors. Those laser beams can scan an area as wide as 62 miles, or concentrate on one spot just half a mile wide.

The laser is coupled with a microwave radar, which detects even the tiniest disturbance on the ocean's surface, helping to guide the beam.

This makes the top layer of the ocean effectively transparent.

And that's not all. Like Thompson noted, China is also capable of beaming lasers back up into space, frying or blinding satellites in orbit.

This is why the U.S. Space Force was created in the first place.

It's why the U.S. Air Force Research Laboratory (AFRL) announced it's pouring $1 billion into space-related technology and equipment to support a broad range of space missions.

It's why the U.S. is poised to launch thousands of new satellites into space over the next decade.

And it's why I've been hunting for companies that will profit from this national security imperative.

In fact, one company I've been closely following just conducted a successful test launch on behalf of the Space Force a few short weeks ago.

If that relationship continues to develop it could mean billions of dollars in government contracts for decades to come.

You can find out more about that here, if you're interested.

Regardless, the main takeaway here is that space is 21st century warfare.

The outer reaches of the earth’s atmosphere, and maybe even one day the moon, are the ultimate high ground.

And it's a huge opportunity for investors.