In 2018 and 2019, I started recommending quality gold mining stocks to my largest group of paying readers.

It was clear the gold market — which had been in a bear market for years — had put in a bottom and was poised to take off.

Gold and gold stocks can hibernate for some time, after which they go on notorious bull runs (more on that in a second). 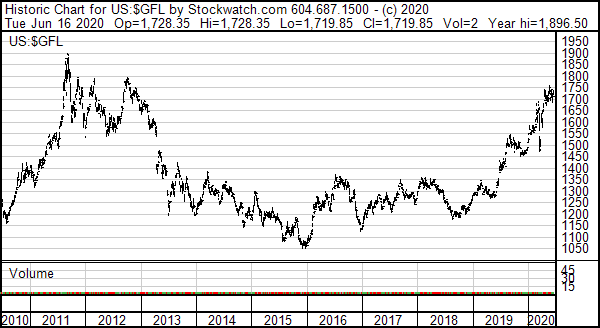 But it was hard to see what would really motivate it to get up given record stock market performance and low unemployment — and markets seemingly content to be hooked up to the Fed’s IV indefinitely.

Everyone wondered what the catalyst would be that would kick the bear out of bed and make the world care about gold again.

And of course we now know it would be the Black Swan of a global pandemic and an unprecedented monetary and fiscal response to combat its effects.

In September 2018 I recommended my readers buy Franco-Nevada (NYSE: FNV) for the first time. We’ve more than doubled our money there already while collecting dividends while the S&P is up ~10%. Lucky timing, I suppose. 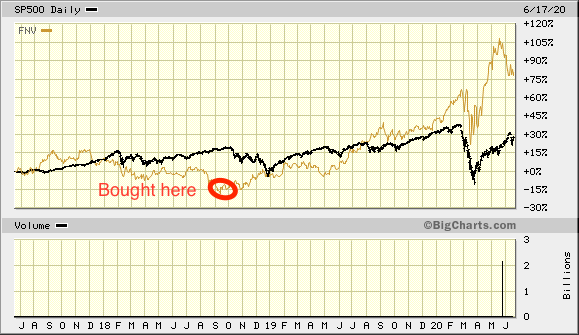 In September 2019 gold was clearly out of hibernation and ready to run Pamplona style. Gold prices were climbing. But gold stock prices reflected that people weren’t yet convinced the bull was loose on the street. I recommended Sibanye-Stillwater (NYSE: SBSW) for the first time — the world’s largest producer of PGMs and third-largest gold producer. 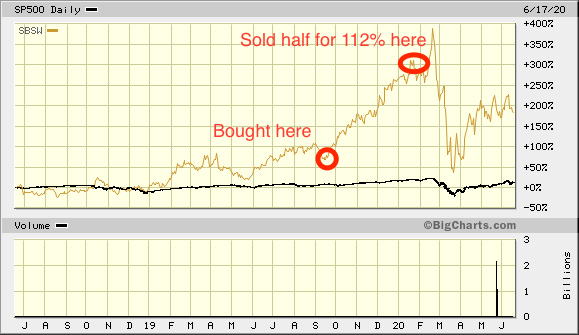 We were able to take a profit of 112% less than four months later. Another stroke of luck! And we'll plow those profits into another gold play.

And this is what I mean about going on notorious bull runs. Where else can you make 112% in four months on large, multibillion-dollar, NYSE-listed companies?

That sort of return is absolutely epic.

Take any stock that has been a darling lately, like Amazon (NASDAQ:AMZN) and Tesla (NASDAQ:TSLA), which have raced to new highs even among the pandemic. It’s all any empty suit on TV can talk about.

You’ve got folks like Dave Portnoy giving half-baked advice to a flock of utter sheep who don’t know what to do with their extra few hundred bucks when they can’t gamble it away.

You’ve got kids trying to get rich day trading Tesla calls on margin. (I’m sure that will all end well, a story for another day.)

Meanwhile, if they could look past their record tech stocks, bro, they’d see that gold stocks like Sibanye are making even Tesla’s rocket chart look inadequate.

This is just the big miners starting to get going.

Doubling your money in four months is nothing when the gold bulls start running.

Especially once this second group of gold stocks gets going.

My money is where my mouth is.

And my mouth is saying gold stock returns are trampling and will continue to trample many other sectors.