Written by Jason Simpkins
Posted May 3, 2019

But a few certainly stand out.

This order was by far his most controversial. And after being challenged in court, it was scaled back in accordance with the law.

Ultimately, the Department of Homeland Security stopped enforcing portions of the order, and the State Department had to re-validate visas that had been previously revoked.

But one key element of the order endured — specifically, Section 8, “Expedited Completion of the Biometric Entry-Exit Tracking system."

With so much furor over the racial elements of the order, this portion didn’t get much attention.

So what exactly is the “Biometric Entry-Exit Tracking system,” and how can investors profit?

That’s what I’m going to show you…

In 2003, still reeling from the September 11 terrorist attacks, the United States created the Office of Biometric Identity Management and tasked it with bringing airport security into the 21st century.

The office has a fancy name but its mission is pretty simple: It ensures that Customs and Border Protection (CBP) can track travelers by collecting and comparing digital fingerprints and photographs.

It does this for all non-U.S. citizens between the ages of 14 and 79. And the results are logged in a database to ensure people are who they say they are.

Of course, President Trump is tightening border security. So now CBP is going a step further.

Hence, Section 8 of EO 13769, which mandates that facial recognition technology be used to confirm the identity of 100% of all international passengers, including American citizens, in the top 20 U.S. airports by 2021.

That is, any person flying into, or out of, the United States on an international flight will have their faces scanned, photographed, and compared to their passport picture.

It’s a tall task, as more than 100 million passengers travel on 16,300 international flights per week.

And it has to be done by next year.

The government’s end vision, according to an early “Biometric Pathway” document from December 2016, is for CBP to build a vast “backend communication portal to support TSA, airport, and airline partners in their efforts to use facial images as a single biometric key for identifying and matching travelers to their identities.”

In layman’s terms, this means that facial recognition will also be used for things like check-in, baggage drop, security checkpoints, lounge access, boarding, and other ancillary processes.

As a result, this technology will streamline air travel, allowing passengers to check bags, move through security, and board a plane much more quickly.

The pilot program was launched in 2016 at the Hartsfield–Jackson Atlanta International Airport.

Once a day, passengers boarding a flight from Atlanta to Tokyo had their passport photos biometrically matched to real-time pictures.

Before travelers proceeded to the passenger loading bridge to board their flight, CBP officers told them to scan their boarding passes while a camera snapped a digital image of the traveler’s face.

The CBP-developed backend system called the Departure Information System then used facial recognition to automatically compare photos during boarding against a photo gallery.

By the end of November 2016, CBP was running tests on an average of seven flights per week. And by June 2017, three more international airports were added to further assess the facial matching technology. And five more airports were taking part four months later. 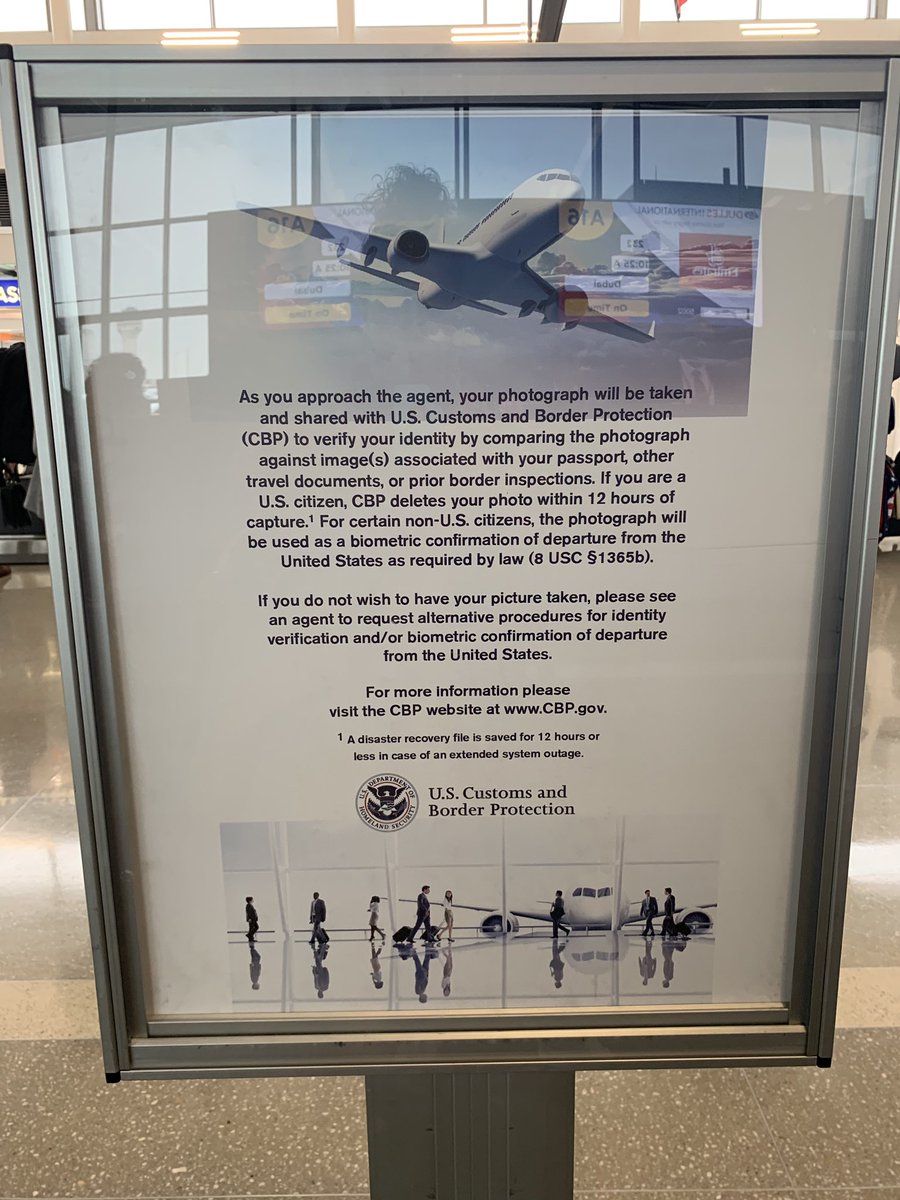 And the end result?

CBP has concluded that facial recognition technology was the most efficient and traveler-friendly biometric solution available.

It’s quick, it’s accurate, and airlines are excited about the possibilities.

After all, you have to remember that airlines, the TSA, and CBP are all fighting the same battle. They’re all facing increased traveler volume that can easily result in bottlenecks, mobs, and frustration for travelers.

This technology aims to alleviate that problem.

Once a traveler is identified and confirmed as a U.S. citizen, their images are deleted. The airlines are not permitted to use the photos for any other purpose, and they have to allow CBP to audit compliance.

CBP also allows U.S. citizens to decline facial verification and instead have their identities confirmed through the usual manual boarding process.

So if you feel it’s too intrusive a process you can opt out.

But again, few do as it’s a matter of convenience.

According to Delta, less than 2% of its weekly 25,000 passengers going through the Atlanta airport’s Terminal F, which features “curb to gate” facial recognition systems, opt out of using the tech.

And this is just the beginning.

This technology is flying out of airports and into every highly-trafficked marketplace and concourse in America.

It was even used at Super Bowl LIII.

And that’s where the profit opportunity comes in.

You see, I recently profiled a company that’s leading the field in this technology.

It’s a company that makes facial recognition software that can be used for both advertising and security purposes.

Big Business Is Scanning Your Face
So you’re interacting with a screen, and it's serving you up precision messaging and products for a bespoke buying experience — all the while sending data its hoovering up in real time to the cloud in real time. Outsider Club Founder Nick Hodge tells readers how they can take advantage...
You'll Never See It, But It's Always Watching
The next time you catch a flight out of the country, your face may end up in a government database. Outsider Club contributor Ryan Stancil discusses an up and coming technology...
The Vanguard of the Security Revolution
The company the Outsider Club's own Jason Simpkins has uncovered has found a solution to a critical security problem. The trillion-dollar market for security is about to fundamentally change.
Heal Your Ailing Portfolio Body