The Reason We’ve Got Jobs But Not Much Else

On Wednesday, Nick Hodge wrote a nice analysis of the U.S. economy, explaining why stocks are up despite a more general malaise in the broader economy.

Indeed, as Nick noted, GDP growth slowed to 1.9% in the third quarter, manufacturing has weakened to its lowest level since 2009, wage growth is mediocre at best, and the Fed has resorted to slashing rates and buying up Treasuries in bulk.

Well this is something that’s nagged at me for a while.

Why is employment the outlier?

The economy added 128,000 jobs in October — the 109th consecutive month of job growth. And the unemployment rate remains near a 50-year low.

It’s a difficult question to parse out I don’t know that there’s a definite answer.

But I’m going to try.

You see, I’ve done some digging in an effort to solve this puzzle and one set of data stuck out more than any other.

Here it is: The government sucks at tracking labor – especially when it comes to people working multiple jobs.

According to the Labor Department, 5 million Americans work more than one job, but a separate analysis by Deutsche Bank actually pegs that figure closer to 8.5 million people, which is a record high. 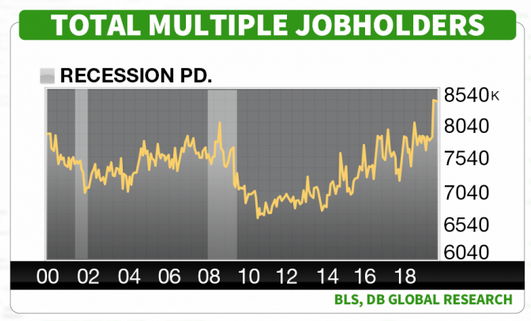 And it could, in fact, be even higher than that.

What accounts for this discrepancy?

First, unemployment numbers are based on the monthly Current Population Survey (CPS) administered by the Census Bureau. However, the CPS depends on in-person or telephone interviews of people over a period of time. And if you’re working multiple jobs, you probably don’t have much time to sit down for an interview with the CPS.

Secondly, and somewhat counter-intuitively, many people with multiple jobs don’t actually think of themselves that way.

Early on in my career, I was working a full-time job as financial writer, and then tending bar at a country club on the nights and weekends. I was getting two meager paychecks, and so I was very aware that I had two poorly-paying jobs.

But for someone else holding down a full-time job and moonlighting – freelance writing, driving an Uber, baby/pet-sitting, or taking cash under-the-table for some other side-work – might not think of themselves that way. For a lot of people the extra work they do to make ends meet is just that, not a second job.

The same goes for doctors, professors, and lawyers who may do some consulting on the side. 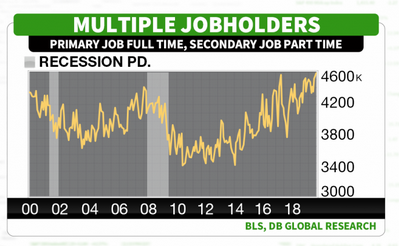 The truth is, many Americans are working multiple jobs and they don’t even know it. And if they don’t know it (and if they’re not sitting around with census workers to talk about it) then the government sure as hell doesn’t know it either.

Furthermore, if you are working a second job on the side, there’s actually an incentive not to tell the government to avoid paying income taxes.

So while the government claims the number of people working multiple jobs is historically low, at about 5% of the workforce, that figure just isn’t accurate.

And the fact that a lot of people are working multiple jobs, and not telling the government for one reason or another, is one reason employment figures and consumer spending have been able to hold up despite declines in other sectors of the economy.

Nick showed you on Wednesday how the stock market has been artificially inflated by Fed money. It’s not rising because companies are super profitable, it’s because the money is there for banks, hedge funds, and billionaires to borrow and invest.

It’s not being driven by foundational economic growth.

They’re working full-time and part time jobs, and they’re taking on gigs and side-work to boost their spending power.

They’ve had to because Americans wages, when adjusted for inflation, aren’t very much higher than they were in the 1960s. 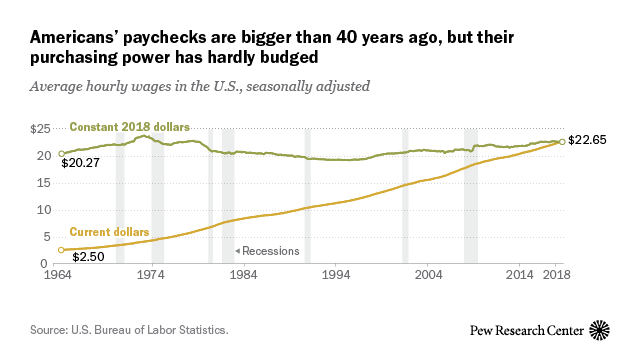 Corporations and banks have the luxury of being propped up by the Fed, as well as the massive corporate tax cut that sailed through Congress in 2017. And those are the same groups who comprise the majority of the investing class – with 84% of stock ownership consolidated in the richest 10% of the population.

But your average American isn’t investing; they’re too busy working.

Stocks and jobs are both inflated economic metrics, and that’s why they’re out of step with other indicators.

It’s only a matter of time before they catch up. So invest accordingly.

What’s Around The Corner In 2020
The Fed is the central bank of the world and it is trapped. Despite what you’ll hear from dollar perma-bears, the next move for the dollar is higher not lower.
The Infection Causing Swollen Stock Prices
What's causing all-time stock market highs? We continue to hear much about job growth and the tweeter-in-chief would have you believe the economy is GREAT!! But perhaps the state of the economy is too good to be true...
Investing in Dividends 101
Inside are answers to a few common questions new investors will have about dividends. It’s easy to buy shares and collect cash, but you should know how all of the moving parts work. You should know when you have to buy a stock, when to expect that check, and how much money you can expect to receive.
Investing in Marijuana Without Getting Burned
The marijuana industry has rewarded scores of investors with life-changing gains.