The Only Way to Play Hypersonics

I don’t know if you saw it or not, but over the summer China conducted a pair of hypersonic weapons tests that reportedly left Department of Defense officials “stunned.”

General Mark Milley, the chairman of the Joint Chiefs of Staff, called it a “Sputnik moment.”

Of course, none of this came as a surprise to me, or my readers, because I've been talking about hypersonic weapons for years.

I even wrote an entire report on the subject, and I'll share the relevant details of that report in a moment.

But first, let's just get caught up on hypersonic missiles...

For instance, what exactly are they?

Hypersonic missiles are weapons that travel at speeds of Mach 5 (five times the speed of sound) or higher.

Such weapons can include unmanned jets or more traditional cruise missiles. But the real threat comes from “glide vehicles.”

A glide vehicle is launched into space (low-earth orbit) by rockets almost identical to ones that carry satellites and astronauts, except it carries a glide vehicle/maneuverable warhead instead. That glide vehicle deploys from the rocket, re-enters the earth's atmosphere, leaves again, coasts for a while, and then re-enters once more, screaming down at its intended target.

This is much different than a traditional ICBM which launches up and comes down in a pretty standard arc. And this unpredictable nature, along with uncanny speed, makes it almost impossible to intercept.

Still, this technology has been around for a while.

Russia's is called Avangard. First introduced in 2018, it launches from an ICBM and is capable of hitting Mach 20.

Meanwhile, China's hypersonic glide vehicle is known as DF-ZF, and it officially became operational in 2019. It can also reach speeds between Mach 5 and Mach 10 and can be outfitted with various ICBMs.

However, the two hypersonic tests China conducted over the summer seem to have taken things a step further.

This was something new.

It apparently circled the globe before crashing down two dozen miles from its intended target.

But again, and let me be clear about this: The United States was already lagging behind Russia and China in hypersonic weapons development.

This is why government-wide hypersonic research funding grew 740% between 2015 and 2020.

All told, the government is working on about 70 hypersonic programs projected to cost $15 billion through 2024.

Where's all that money going?

The Only Horse in the Race

Lockheed Martin has developed and flown more hypersonic vehicles than any other U.S. company. It has decades of development and flight test experience from government contracts and it outpaces its competitors in research and development.

Just for example, the company was already developing the SR-72, a hypersonic unmanned plane dubbed the “son of the Blackbird.”

The original Blackbird, the SR-71, flew from New York to London in less than two hours — at speeds exceeding Mach 3, or three times the speed of sound. And that was in 1976.

It’s since flown more than 30 years, outpacing any anti-aircraft missiles launched its way, and it’s still the second-fastest manned plane in history.

Here I am standing in front of it... 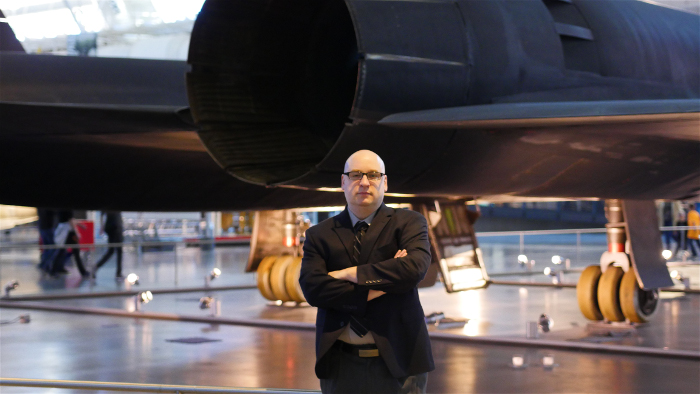 The SR-72 will be twice as fast, operating at a speed of Mach 6. It incorporates lessons learned from Lockheed's Falcon Hypersonic Technology Vehicle 2 (HTV-2) experimental aircraft, which flew at Mach 20, or 13,000 mph, after being launched from a rocket. At those speeds, the aircraft could travel from New York to Los Angeles in under 15 minutes.

Lockheed Martin is also working on a hypersonic weapon known as the Air-launched Rapid Response Weapon (ARRW, or “Arrow”).

The ARRW is a rocket carried by an aircraft, such as a B-52 bomber, and has a top speed as high as Mach 20. It's still in the testing phase but is supposedly on schedule to enter production in the government's current fiscal year (by the end of next summer).

Lockheed Martin is the stock I recommended in my initial hypersonic report three years ago, along with rocket engine maker Aerojet Rocketdyne, which Lockheed acquired late last year.

And really, it's the only game in town when it comes to investing in hypersonic weapons development.

In that report, Lockheed was forced to lower its revenue guidance for this year and next.

And it cut its 2022 net sales forecast to approximately $66 billion, which means the company figures to make even less next year.

This unsurprisingly has prompted a “reassessment” of the company’s five-year business plan.

Yet details on what that might entail are murky.

Here’s how Lockheed Martin phrased it:

Consequently, we are adjusting our capital allocation strategy with two major objectives. First, to expand further our robust reinvestment in the company to serve our customers’ evolving needs through capital projects and independent research and development for mid- to long-term enhanced growth performance. Simultaneously, we plan to reward shareholders with continued dividend growth and meaningful increases to the scale and rate of our share repurchase program. Over the short-, mid-, and long-term, we will strive to maximize cash flow per share dynamically, based on revenue growth opportunities, inorganic investments, and share repurchases to take full advantage of our significant cash flow generation and strong balance sheet.

Reading that, it seems the company intends to focus more squarely on R&D spending, share buybacks, and dividend increases.

One might argue that’s where they should have been focused all along, but it’s not a bad plan.

In any case, regardless of the company’s missteps, I continue to believe Lockheed Martin is a long-term buy.

The company is too integral to the defense and aerospace industries.

It's simply capable of doing things no one else is.

And as I said, it’s the dominant player in U.S. hypersonic development, which gives it a huge advantage.