The Oil Spike I Predicted Is Here... And It's Going to Last

For more than a year now, I've been ringing alarm bells about inflation.

But earlier this spring (March 11) I called out oil prices specifically.

"Oil prices have staged a comeback and are now trading above $65 per barrel — an 80% surge from their October lows," I noted. "Better still, for the industry at least, they're poised to shoot even higher."

And indeed oil prices have continued their climb. 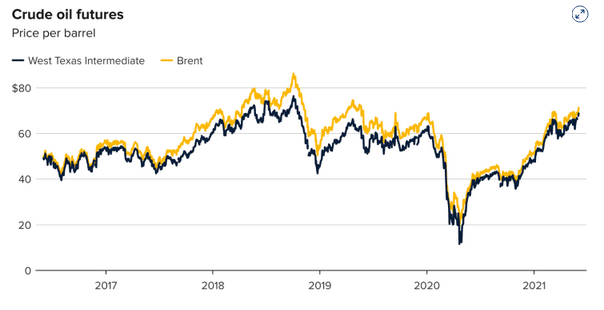 Of course, past is prologue, as they say.

What I'm here to tell you now is that oil prices are going to keep rising.

In the short-term I foresee us hitting $80 per barrel in the next few months. And in the long-term, a year or two, I think we'll see triple-digit oil prices for the first time since 2014.

To be clear, regardless of what government experts and the media might tell you, higher oil prices are not just temporary.

They're here to stay.

And my reasoning is simple.

As always, it comes down to supply and demand.

Obviously, demand is on the rise.

Global demand for oil fell from nearly 100 million barrels per day (bpd) in 2019 to 91 million bpd amid the pandemic. You may recall prices fell by more than $50 in a single day to less than zero at one point.

This led to massive cuts in production.

Now, of course, demand has returned — but supply hasn't.

OPEC, which controls 40% of the world's oil supply, cut its output by a record 9.7 million bpd as demand collapsed last year.

However, the cartel has remained committed to bringing that supply back gradually, with a planned production increase of 350,000 bpd in June and another 450,000 bpd starting in July.

That means as of July, the curbs still in place will stand at 5.8 million bpd.

Meanwhile U.S. producers have been even more reluctant.

The U.S. oil industry, which requires higher prices to make production viable, is still only producing 11 million barrels a day, which is down from about 13 million before the pandemic.

And there's no real appetite to change that any time soon.

That's because U.S. producers are more inclined to pay down debt and restore dividends following last year's collapse. On top of that Western companies are now facing more pressure from the government to help the country decarbonize and from shareholders sensing a foundational shift towards green energy.

Indeed, over the past week activist hedge fund Engine No. 1 has succeeded in replacing three members of Exxon Mobil's board of directors — succeeding in its effort to force the company in a more eco-friendly direction.

"We look forward to working with all of our directors to build on the progress we've made to grow long-term shareholder value and succeed in a lower-carbon future," Exxon Chairman and CEO Darren Woods said in a statement Wednesday.

Such efforts will undoubtedly draw capital away from production, as well as exploration and development.

And that imbalance is likely to endure for the foreseeable future.

The real question is, how bad will it get?

When we last discussed the oil market back in March, I warned of $4.00 per gallon for gasoline.

I'd say we're well on our way.

So remember what I said about inflation creeping from the shadows this spring and seizing the spotlight come summer.