The Next King of Cannabis

Ever since I moved to Spokane, the town has been abuzz about the coming Amazon fulfillment center.

Everyone in town can cite the statistics the local news has rattled off weekly for years:

One of my neighbors headed up a utility project to run underground power to the warehouse. Another guy I know helped pour the concrete.

It’s been a regional stimulus. Bezos even donated $5 million to Spokane charities this week.

You know the story of Amazon’s business and stock success.

Shares have gone up a scant 100,000% in the past two decades, making the record-setting S&P not even appear on the chart. 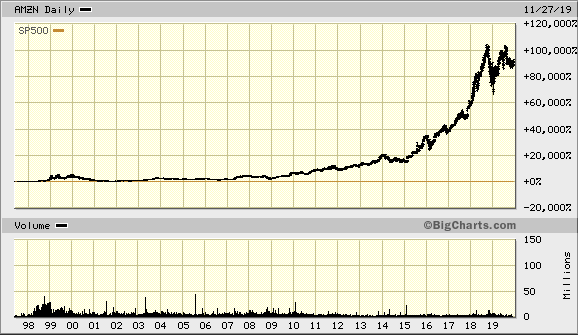 There’s another sector that’s building out infrastructure like this… giant buildings that are changing entire towns. And it only has a fraction of the value of Amazon, for now.

Right now, though, the cannabis industry is in turmoil. The 2,000%-3,000% gains of the past two years have now been erased very quickly. Many got rich. More got suckered in. 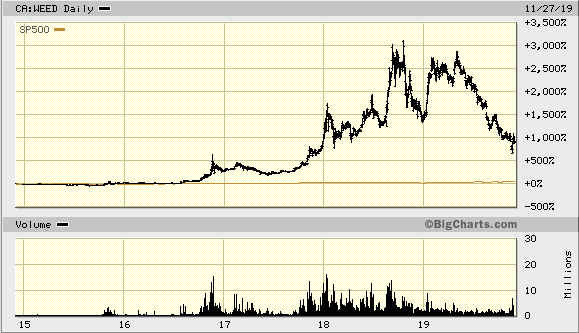 I know. I’m the publisher of the newsletter writer who was the very first to be let through the doors of what became Canopy Growth: Jimmy Mengel. He did that back in 2013.

The cannabis stock bubble has burst, but the industry is still alive and well. It continues to gain acceptance among the masses and the list of states and counties that are legalizing continues to grow.

As the new decade unfolds, so will Cannabis 2.0. But as Jimmy just told me:

It remains the biggest win of my career and the most profitable recommendation I’ve ever made...

But unfortunately... Canopy isn’t going to be the cannabis company to take us to the next round of growth.

It's jettisoned its founder, diluted shares, and like any large company, won’t be growing at a large enough scale to make a difference for investors.

Those were his words upon returning from a trip to what he is calling “the next king of cannabis.”

It’s building out one million square feet of grow space and is growing plants with an unmatched level of technological sophistication.

And it’s hired hundreds, if not thousands, of employees in its quest to deliver the highest greenhouse yields in the industry and drive down costs — transforming towns along the way just like Amazon is doing in Spokane.

Jimmy said he hasn’t seen anything like it since he toured Canopy Growth. And the timing is perfect considering the recent sell-off that’s occurred.

Make way for the next king of cannabis.

Cannabis 2.0 Starts Today
Today is the day that Cannabis 2.0 launches in Canada. The new law hitting cannabis today will make White Claw look like Zima. Outsider Club editor Jimmy Mengel shows investors a way they can capture their fair share of the profits...
Kiss My Hass!
The numbers speak for themselves; avocados are big business. Outsider Club editor Jimmy Menegel explains that while profitable, the avocado pales in comparison to the growth of another green export…
Investing in Marijuana Without Getting Burned
The marijuana industry has rewarded scores of investors with life-changing gains.