The Mystery Man at the State of the Union

How can we sleep when our beds are burning?

An unmistakable neon glow emanates from an abandoned storefront in Philadelphia’s University City. As part of a massive real estate investment, Drexel University acquired an old Firestone car repair shop and turned it into a pop-up art gallery, complete with retro neon signs, some dating back to the 1950s. It gives students a glimpse into Philadelphia’s past as they work toward a better future.

It turns out these were just a small sampling of art collector Len Davidson’s neon sign collection. And last year, he opened the Philadelphia Neon Museum. It’s worth the trip if you’ve never been. It’s got the original Pat’s Steaks and General Electric signs. Here’s a snapshot of all the fun... 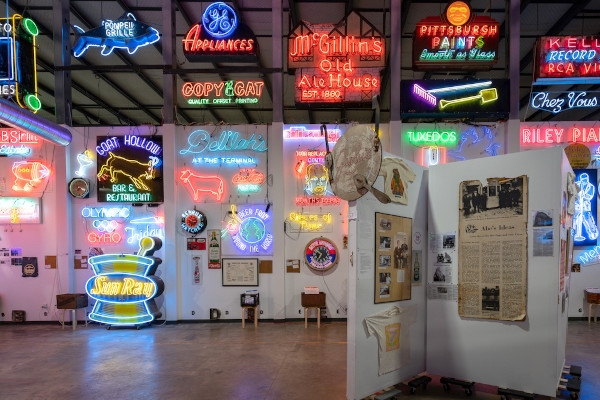 Davidson told Hidden City Daily that these neon signs are “an entrée into telling stories about pre-internet Philadelphia.”

Ah, a world without smartphones... Those were the days.

Little did these sign-makers know how much the world would come to rely on neon. That’s because the noble gas is a critical component for the lasers used to etch patterns on silicon chips.

And get this... As if the supply chain needed more disruption, prior to the Russian invasion, the U.S. imported 90% of its neon from Ukraine. Even chipmakers like Intel sourced 50% of the stuff from the now war-torn country.

I’ve said it before, but the Ukraine mess leaves Wall Street in a heightened state of uncertainty. That’s why we’ve seen such wild swings in the market since the Russian invasion began. As investors digest global uncertainty and rising interest rates, the major indexes have teeter-tottered.

Will all this negatively affect the big chipmakers going forward?

The Biden administration doesn’t think so, and it’s probably why Intel insiders are loading up on the stock.

I did something I really didn’t want to do last week...Who’s That Man?

I watched the State of the Union address.

I’ve heard more coherent speeches from drunks in the alley. Not that I spend my time with drunks in the alley, but you get my point. (I’m also thankful I can write that without fear of being punished, something Russian journalists are dealing with right now.)

But something unprecedented happened at the speech, and it had Nancy Pelosi licking her chops thinking about all the money she's going to make from trading stock... even Kamala Harris noticed and shot her a nasty look.

Traditionally, the first lady invites guests to sit next to her at the State of the Union. These could be people who hold importance to the administration and support its policies. This time, the first lady invited Facebook whistleblower Frances Haugen, Ukraine’s ambassador to the U.S. Oksana Markarova, and Intel CEO Patrick Gelsinger.

Something big must be going on if the CEO of a blue chip company like Intel is invited to the State of the Union. Apparently, Intel is building a semiconductor manufacturing facility near Columbus, Ohio. It’s supposed to offset the high demand and short supply of chips, which is contributing to the supply chain disruption. Originally a $20 billion bid, Intel’s now vowed to increase the investment to $100 billion if the White House is able to subsidize the industry through passing legislation.

Here’s what Biden told lawmakers about Intel, even calling out the newly appointed CEO by name!

Intel's CEO, Pat Gelsinger, who is here tonight, told me they are ready to increase their investment from $20 billion to $100 billion. That would be one of the biggest investments in manufacturing in American history. And all they're waiting for is for you to pass this bill. Send it to my desk. I'll sign it.

I find it odd that only a few months before the televised speech, insiders at Intel were loading up on stock. (We'll let the SEC deal with that though.)

Now, I’ll admit, I didn’t know Gelsinger was slated to attend the State of the Union. But I knew from tracking insider trades that company execs were expecting something big in the near future.

That’s the power of following the smart money...

On February 7, I added Intel to my watch list, saying the following about what I found:

There was heavy cluster buying at Intel (NASDAQ: INTC) to end the year, with CEO Bob Swan buying more than $2 million worth of shares. The CFO and multiple directors also purchased stock at an average price of $50. Intel's a huge supplier of chips to China, and it was slated as one of the biggest sponsors at this year's Olympics in Beijing. But Intel's holding firm that it doesn't support the reported human rights violations by the communist country. So even though the company pulled out from a massive advertising opportunity, it's betting it will gain more publicity and respect, leading to better customers. I'd feel comfortable purchasing anywhere below $47.73.

There was even cluster buying in Congress, a very rare sight. Kevin Hern, Tommy Tuberville, and Marjorie Greene, among others, all recently purchased stock.

Vanguard, Blackrock, and SSGA have all increased their holdings to boot.

Now, the big chipmakers like Intel, Micron, and SK Hynix have all recently reassured investors that they’ve prepared for the risks involved in sourcing materials from Ukraine and Russia by stockpiling certain materials and buying neon from new suppliers.

But as volatility and uncertainty can affect the chipmakers in the short term, we’re keeping a close watch on the sector.

The times, they are a-changin'.

P.S. I'm thrilled to announce my colleague Sean McCloskey just held a special event where he shared critical market advice that you need to know in these uncertain times. Sean's a master trader and embraces volatility to profit whether the market's going up, down, or sideways. He even booked a 200% gain in 20 days during one of the worst corrections in recent history. I suggest you check it out ASAP.