The Market Is Sick With Addiction – The Fed’s the Dealer

You hear that coughing and wheezing?

It’s not someone infected with the coronavirus, it’s the Wall Street junkie trolling for another hit of that sweet, sweet monetary stimulus.

"It's critical for the Fed to cut again. The market doesn't want one-off responses. The Fed has to be willing to cut repeatedly. If this is a one-and-done cut, that's a disaster and counterintuitive," a panicked investment banker named Eric Winograd told CNN.

Winograd, a senior economist with AllianceBernstein, also called this FOMC move “more preemptive” and said the “odds of another rate cut in two weeks are high."

"I would not be surprised if within the next few months the Fed went back down to zero," he said, almost certainly licking his lips and scratching at his face.

That might just be wishful thinking on his part, but it could also be true.

Time and again these past few years, we’ve seen the Federal Reserve rush to the rescue any time stocks start to quake.

And boy, are they quaking...

Last week was the Dow’s worst in over a decade. And at one point on Tuesday, it was down as much as 997 points. That’s when the Fed intervened. But even an emergency rate cut wasn’t enough to turn things fully around, as the index closed the day down 786 points, or 2.9%,

That’s why Wall Street bankers like Winograd and Kelly are jonesing for more, still more.

See, when I first heard about the rate cut, I was confused.

Was the plan to distract the coronavirus by getting it to buy a house or start a small business, I wondered.

What exactly was this meant to achieve?

But Wall Street knew better. After all, the Fed hasn’t cut rates since November — more than three whole months ago, if you can believe it.

That decision — the third rate cut of 2019 — was made to compensate for the trade war with China, which also threatened to hamper growth.

And as we all know, that’s the Fed’s job: to flood the market with cheap money any time the economy shows any weakness at all.

Recessions are a thing of the past. Bear markets don’t exist anymore. Not in today’s world. These days, the second things get murky we borrow, borrow, borrow.

Debt is the solution no matter the problem.

Better roll out some debt.

This is why, as Nick Hodge pointed out on Wednesday, worldwide debt has returned to levels not seen since the 2008 financial crisis. 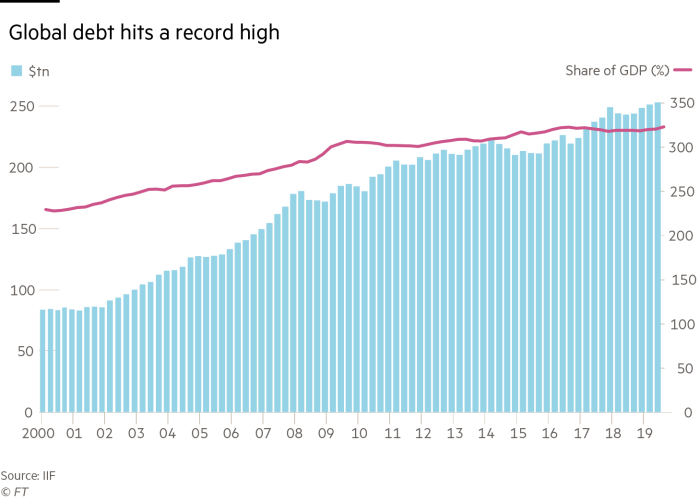 Indeed, the ratio of debt to gross domestic product hit an all-time high last year of 322% — with total debt close to $253 trillion.

It’s also why gold has soared over the past year, breaking through the $1,600 mark.

And at this rate, both are poised to climb higher still.

For one thing, Wall Street has already made it clear that the Fed’s emergency rate cut wasn’t enough to satiate it. It can’t stomach a down year, it just can’t. It needs that monetary stimulus, man.

And given the track record of accommodation, it might just get it when the FOMC meets on March 18.

In fact, some analysts think the gravy train will really kick into high gear, and rates will go negative the same way they have in Europe.

That would flush what little money is left in our nation’s savings account into the stock market. That, or the Fed could relaunch quantitative easing and start buying bonds again.

Any or all of those measures would further fuel gold’s fire.

Of course, if the coronavirus doesn’t get us to that point, something else will.

Because as I said, that’s how we deal with economic uncertainty now. Whenever it looks like the bubble might pop we respond by inflating it even further.

So it’s really not a question of if we get more emergency monetary stimulus, lower rates, negative rates, QE, or something else — it’s a question of when.

That’s why now is the time to act.

Here’s the best way you can do that.