You know the video promotions we send out?

The ones that sell our premium research letters?

Of course you do.

They always cite the biggest gains possible for whatever sector is being discussed.

All publishers do it. But some do it differently than others.

Take technology promos, for example. They tell you it’ll be like getting into Microsoft when Bill Gates still ran it out of his garage.

Or in a biotech promo, they’ll tell you it will be like getting into Merck when it was founded.

One, have you or anyone you know ever gotten in on the actual ground floor of what became a Silicon Valley giant — or any other giant for that matter?

Two, Merck was founded in 1668. Were you investing then?

Most of the gains cited in those promos usually center around specific windows of time.

You might think that’s because there are no household mining names. And you’d be partially right. Kinross doesn’t have the name recognition of Microsoft or Amazon.

But the bigger reason is that gold stock gains come in cycles. You wouldn’t want to hold them for the periods necessary to deliver the same returns as a Microsoft.

And you don’t need to… because when the cycle starts, gold stocks deliver similar type returns in much shorter windows of time. 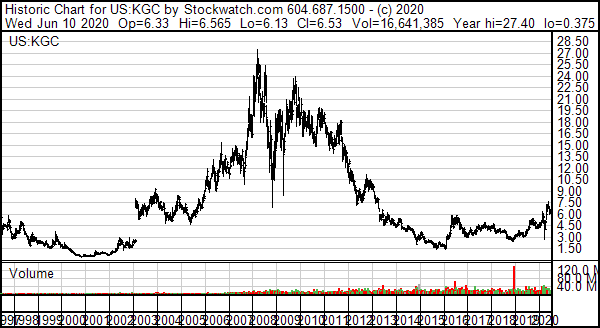 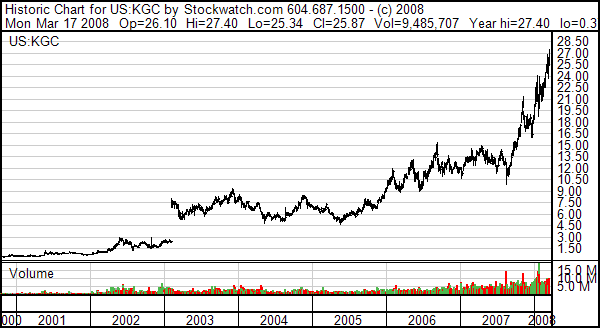 You didn’t need to be Bill Gates' friend.

We just happen to be at the beginning of a gold bull cycle. Look at that first chart. It's not hard to see Kinross is on its way back to the $20s.

When they’re making gold newsletter promotions in 20 years… they’re going to be quoting today’s prices as the lows.

Now is the beginning of the cycle when thousands of percent are made.