The Golden Bandwagon Is Growing

I am loaded to the gills in precious metals equities.

Millions and millions of shares plus warrants.

In these pages, we have been telling you what was coming for years.

There are secret police kidnapping citizens in American streets.

Corporatism has taken over and the printing press is being used to prop up zombie corporations and assets at the expense of the people (the same people who are being kidnapped in the street).

Nearly 90% of Americans are expressing dissatisfaction with the current state of the nation.

And it’s “the state” that’s to blame.

It stopped working for Americans and ceded control to corporations and lobbyists years ago.

You are now seeing the wonderful results.

And there is much more to come!

Just wait until they can’t service the debts!

It took years for the cycle to play out. But playing out now it is — fast. 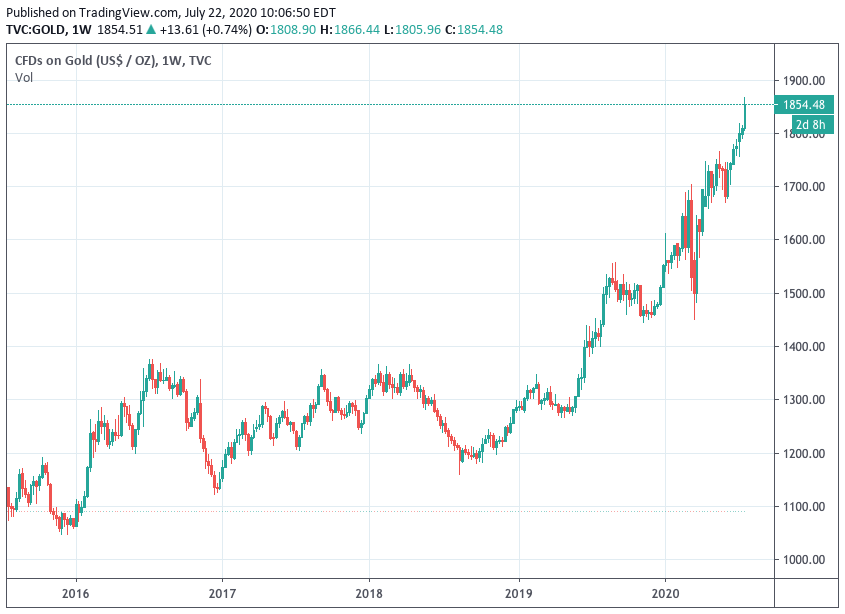 Gold has ripped $300 higher this year already. It just put in a record quarterly close. And it’s now knocking on the door of all-time record daily highs in U.S. dollar terms.

Gold, of course, has been at record highs in nearly all other currencies.

But now that the U.S. printing press is unabashedly being run at full speed with no sign of stopping… the dollar has weakened quickly and commodity prices are taking off.

This fear is what has taken gold up so quickly.

And it has been an absolutely fantastic year if you’re positioned in the right gold stocks.

I have already made more money in the market this year than in any other year… and there is much more to go. Gold stocks are outperforming the record-setting NASDAQ by a factor of two!

Major international banks are now recommending their wealthiest clients hold 10% of their assets in gold.

Gold articles are showing up with more frequency in Bloomberg, WSJ, and CNBC.

The bandwagon in gold is now growing… and that’s when the next legs of the cycle kick into gear.

If you missed the kickoff to this gold bull market and the hundreds of percent that have already been made — even though I’ve been telling you precisely what was coming — it is now time to act.

Gold and gold stocks are going much higher with or without you.