The Fed Fiddles While Americans Burn

I was talking to my colleague Jimmy Mengel the other day and we discussed the phrase: "Nero fiddled while Rome burned."

I couldn't help but reflect on that conversation when the latest inflation data hit on Thursday.

Once again, the data confirmed what we all know, what we've all seen with our own eyes, and what we here at the Outsider Club have been predicting for more than a year now...

Inflation is a problem.

Consumer prices for May accelerated at their fastest pace in nearly 13 years.

The consumer price index, the arbitrary collection of goods and services tracked by the government, rose 5% year-over-year — its highest reading since reaching a 5.3% increase in August 2008 (right before the financial crisis).

The core CPI, which strips out everyday necessities the Fed doesn't like to talk about (namely food and energy) increased 3.8% — its fastest pace since May 1992.

The list of things growing more and more expensive is broad, touching virtually every facet of American life.

Used car and truck prices surged 7.3% in May and are up 29.7% over the past year. Car and truck rentals rose along with sales prices, jumping 12.1% to compound a 16.2% increase from April.

After sustaining heavy losses in the pandemic, airlines are back to gauging eager travelers with airfare climbing 7%.

But still, it's the housing market that continues to feel rising price pressures most acutely.

Nationwide, home prices rose another 13% in March from a year earlier, the biggest gain since 2005.

There are a lot of reasons for this...

Homebuilders slowed or ceased activity in the wake of the 2008 collapse leading to a dearth of new supply.

At the same time, corporations and investment banks swooped into the beaten-down market, gobbling up foreclosed homes and distressed houses at steep discounts. In some cases they sent buyers to courthouse auctions with duffel bags full of cash.

That effort continues to this day, with investment banks and private equity firms outbidding young families for homes that they will ultimately rent out or flip.

Of course, supply-and-demand is one thing — artificial inflation is another. 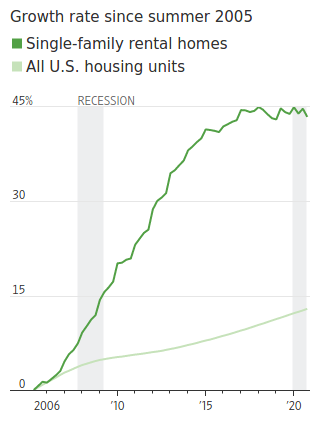 And that's what's been exacerbated by the Fed, with its rock-bottom interest rates and massive bond purchases.

While the Fed continues to insist inflation is no big deal, lumber prices have been skyrocketing, further suppressing the appetite for new construction.

Framing lumber was priced at $1,200 per thousand board feet as of late April, a 250% increase from the year-ago period when the price was about $350, according to an analysis from the National Association of Home Builders (NAHB).

For house hunters, that adds an average of nearly $36,000 to the price of a home.

And despite the increasingly loud chorus of homebuyers screaming "Uncle!" the Fed continues to gobble up $40 billion worth of mortgages each month. The central bank's mortgage holdings have now climbed over $2.2 trillion with no signs of abating.

Analysts, who can see as well as anyone else that this support for the housing market is entirely superfluous, have begun to speculate that the FOMC will soon start tapering its purchases.

But that's giving Jerome Powell and the Fed far too much credit.

This group has made it clear that it simply doesn't care about rising prices.

Powell says he's not even "thinking about thinking about" raising interest rates. And the thought of tapering is still just a faint consideration.

Recent comments by Fed officials suggest the issue hasn't even been discussed yet, and it won't necessarily come up in next week's meeting, either.

And when those discussions finally do arise they will not lead to any immediate action.

An actual announcement of a decision to actually taper would be several months later — this fall at the absolute earliest. And that announcement would only signal the beginning of the asset reduction further out in late 2021, or more likely sometime in 2022.

Furthermore, since the Fed will gradually reduce its bond purchases (not end them abruptly), the timeline would still see the central purchasing billions of dollars of assets well into 2022.

And finally, any potential increase in interest rates would come even further down the road.

So don't think the Fed is going to realize the error of its ways anytime soon.

It's going to keep playing the same dismissive, uninspired tune for the foreseeable future, no matter how high the inflationary flames rise.