On February 17, an American P8-A Poseidon flew out of Okinawa on a routine mission to patrol international waters roughly 380 miles west of Guam.

On that patrol, the aircraft encountered a Chinese destroyer, the Hohhot. And as it did, it was struck by a military-grade laser that temporarily blinded the pilot.

It was an aggressive, reckless, and dangerous assault...

But hardly the first of its kind.

The fact is, China has been attacking U.S. forces with laser beams for years now.

They literally number in the thousands at this point.

Prior to the Feb. 17 incident, similar attacks had occurred in Djibouti, which is home to both U.S. and Chinese military bases.

You might not have realized we had a military base there, but Camp Lemonnier on the east coast of Africa is a key staging point for operations in terrorist hotbeds like Somalia and Yemen.
Or at least it was until the Djiboutian government requested that the U.S. military halt its air operations there after a series of crashes.

That was in 2018 after a U.S. Marine Corps Harrier jet crashed at the country's international airport, and a CH-53 helicopter sustained "minor damage" while landing in Arta Beach.

At the time no one was sure what had caused the crashes. The Pentagon was predictably tight-lipped about them.

But when Chinese lasers injured the eyes of two pilots flying a C-130, the Department of Defense finally broke its silence and issued a formal complaint. It was then that the cause of the accidents became clear.

The Pentagon issued a notice to its airmen telling them to "exercise caution" when flying in certain areas in Djibouti, due to lasers being directed at U.S. aircraft over a period of weeks.
"During one incident, there were two minor eye injuries of aircrew flying in a C-130 that resulted from exposure to military-grade laser beams, which were reported to have originated from the nearby Chinese base," the notice said.
One month later, U.S. officials acknowledged that military aircraft operating over the East China Sea had been targeted by lasers more than 20 times, and lodged a formal diplomatic protest with Beijing called a demarche. 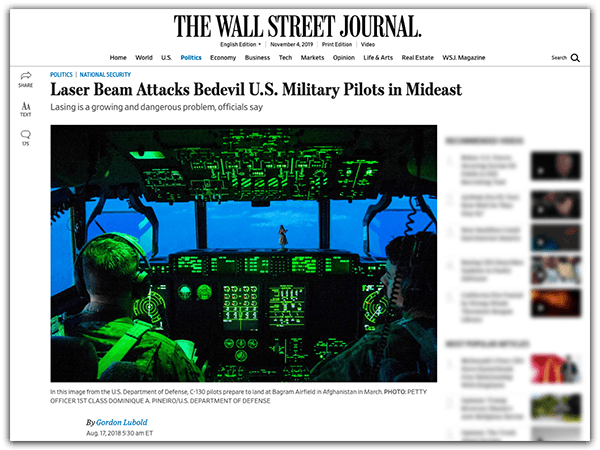 That's a serious step because laser weapons are a sensitive subject internationally.

The Geneva Conventions prohibit them from being used to target eyes because it can cause permanent damage. And both China and the U.S. are signatories to the Protocol on Blinding Laser Weapons, which prohibits the use of blinding laser weapons as a means or method of warfare.

China, however, isn't known for its strict adherence to international law.

So the attacks persist, with Beijing denying culpability even as new attacks occur — such as a May 2019 attack on Australian Navy helicopter pilots in the South China Sea.

Furthermore, a 2015 report in the official Chinese military newspaper the PLA Daily noted that: "China has been updating its home-made blinding laser weapons in recent years to meet the needs of different combat operations."

And that's not all.

A recently declassified report from the Defense Intelligence Agency laid out an even greater threat.
You see, China's laser capabilities aren't limited to blinding pilots.
Not by a long shot.
That's just the tip of the iceberg.
The truth is that China has secretly been working on much bigger, much more dangerous laser weapons that are capable of downing jets, submarines, and even satellites.
"China is developing antisatellite capabilities, including research and possible development of directed-energy weapons," the report reads. "China is employing more sophisticated satellite operations and probably is testing dual-use technologies that could be applied to counterspace missions."
China is also building a 'Death Star' — a space weapon capable of shooting down onto the Earth to eradicate U.S. assets.
Not just aircraft, warships, and tanks, but power plants and cell phone towers, as well.
The head of the Air Force Special Operations Command (AFSOC), Brigadier General William Whittenberger, put it bluntly:

So you see, this isn't just about taking cheap shots at U.S. airmen.

It's about something much bigger. China is rapidly developing laser, or directed-energy, weapons to neutralize the U.S. military and undermine our society as a whole.

It has a whole plan about how to disable America's power and internet infrastructure with lasers, and to do so without being caught.

"Nobody will know where the attack came from," said one Chinese defense researcher. "It will look like an accident.”

Now, the United States is behind the eight ball.

That's why a ton of money is suddenly pouring into laser-defense initiatives outlined in the Pentagon's budget.

All told, research, development, test, and evaluation funding for laser weapons has increased 23% from 2017 levels to $91 billion.

And I've found the company that's in the best position to profit.

You see, there's only one firm in the Western world with laser technology capable of keeping pace with China's. That's why it's the go-to supplier for heavyweights like Lockheed Martin and Northrop Grumman.

And this small supplier is about to see a huge increase in demand for its services.

That's why I'm encouraging readers to check out my full report here.

It tells you everything you need to know about China's diabolical plan, how the U.S. intends to counter, and the one small company that will be at the center of the response.

But you have to act now. There's not much time.