The Debt Ceiling Debate: Are We Really Doing This Again?

The U.S. government once again hit its borrowing limit yesterday, forcing the Treasury to deploy “extraordinary measures” to avoid default.

Of course, it’s kind of hard to call those measures “extraordinary” when we’re forced to take them every two years.

Nevertheless, they’ll last until sometime in June. That’s when we’ll hit the debt ceiling in earnest. And if we don’t raise it to accommodate our spending commitments, the economy will collapse into a crisis the likes of which we haven’t seen since at least 2008 — maybe ever.

Why are we doing this to ourselves?

Conservatives have been playing this game of chicken in one form or another for more than a decade now and it never gets us anywhere.

It only causes problems.

The first time they tried this back in 2011, the gambit caused credit ratings agencies to lower America’s credit rating for the first time ever, increasing the amount of interest the government has to pay on its debt.

However, that could be the least of our problems this time around.

Because these days, the more extreme wing of the Republican party has even more power and less sense. They have a tenuous grasp on economic matters and are prone to conspiracy theories and magical thinking.

We already saw how stubborn they could be when they held up their own House speaker’s appointment to start the year, forcing 15 votes over four days. It was the first time in a century that that routine appointment dragged out like that.

And the hard-liners were rewarded for those efforts with committee appointments, rule changes, policy concessions, and more influence.

So you can see why they might be emboldened to play hardball on this issue too.

In fact, as part of those negotiations, Kevin McCarthy seems to have agreed to a plan that would cap discretionary spending at 2022 levels among other “fiscal reforms” in exchange for agreeing to raise the debt ceiling.

At least, that’s according to this slide from the GOP conference… 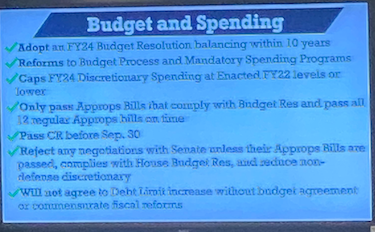 To be clear, this is a non-starter for Democrats. It’s just not happening.

They have in the past refused to negotiate at all on the matter of the debt ceiling and that’s not going to change this time around. The White House and Senate are simply not going to be extorted into accepting the GOP fiscal agenda.

The conservatives know that, of course. That’s why they’re also trying to formulate an emergency plan to mitigate the effects of a default — a payment prioritization plan that would ensure U.S. creditors are paid, even as essential domestic services are stiffed.

Again, Republicans floated similar ideas in 2011 and 2013 but were ultimately confronted with the grim reality that it’s not technically possible for the U.S. government to pick and choose which specific bills it pays and which it defaults on.

This group could ultimately reach the same conclusion, but that’s not a given — especially with a fringe that’s already proved willing to buck its own leadership and its own establishment (not to mention logic and reason) to get its way.

That being the case, our economic salvation may depend on the more moderate Conservatives in Congress defecting to team with the Democrats to raise the debt ceiling.

That’s really the only hope since other solutions, like printing a $2 trillion coin or invoking the 14th Amendment, risk undermining our nation’s credibility nearly as much as a default would.

So let’s hope it doesn’t come to that. Especially because there’s a lot of light at the end of the tunnel should we avoid shooting ourselves in the foot.

That is, 2011’s debt ceiling showdown ultimately ended up being a tiny blip in the stock market’s massive bull run.

With inflation still running hot, interest rates rising, and a potential recession on the horizon, clearing this first self-imposed hurdle is paramount to igniting another bull run.

It’s literally the least we can do.

P.S. A small group of Americans is celebrating whenever a package leaves an Amazon warehouse because a dedicated portion of that revenue goes into a pot of more than $2.3 billion in legally obligated payments. Find out how to get your cut here.