The Death of Social Security: Time Is Running Out

I hate to say it.

I feel like the Ghost of Christmas Future showing Scrooge his tombstone.

In this case it reads:

This probably doesn't come as a surprise to you.

It's something that's been widely discussed, and that's backed by basic math.

As Baby Boomers grow older, the number of retirees is steadily increasing. At the same time, the pool of labor is shrinking.

Americans are also living longer and having fewer children.

At the current rate, the Social Security "bank account" will be exhausted in 2033, when it will have only about 77% of what it should pay out that year.

And that's IF we even make it that far. Because as you may know, the Social Security fund isn't actually a fund — it's a debt obligation.

Technically, money from payroll taxes, taxes on pension and disability benefits, interest earnings, and a few other sources goes into the fund. But when more money goes in than gets paid out in the form of Social Security benefits, the government seizes it and spends it — leaving nothing but IOUs behind.

So the Social Security fund isn't really a “fund” at all.

This is something the government itself has fully acknowledged.

Back in 2000 Bill Clinton’s Office of Management and Budget noted that:

“These balances are available to finance future benefit payments … only in a bookkeeping sense. They do not consist of real economic assets that can be drawn down in the future to fund benefits. Instead, they are claims on the Treasury that, when redeemed, will have to be financed by raising taxes, borrowing from the public, or reducing benefits, or other expenditures.”

So let's be clear: The Social Security money we think we have, isn't any more real than the debt we sell to China. 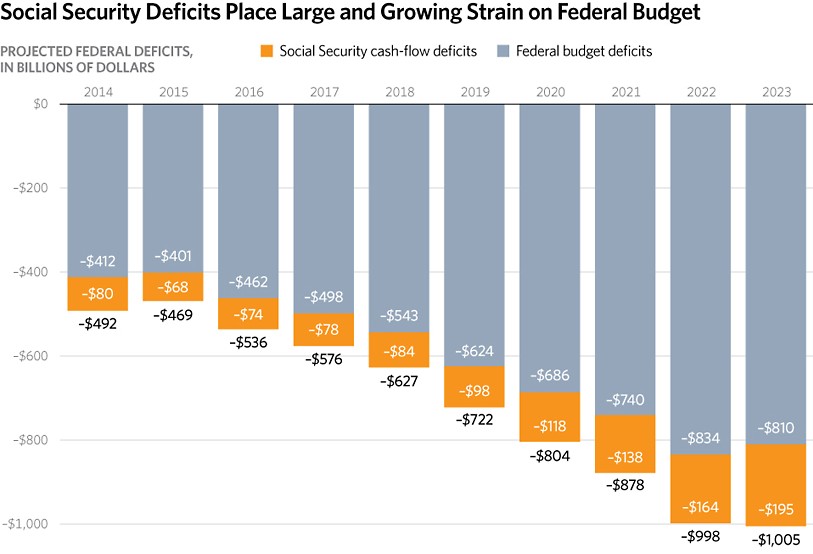 We're just taking it on faith that the revenue will be there to meet our obligations. There's no guarantee that it actually will be.

And even if it is, we only have enough to last for another 15 or 16 years.

Now, a lot of people are quick to dismiss this fear.

“Don't worry,” they say. “The government will act well before then.”

But to me, that's a crazy leap of blind faith.

Looking at today's gridlock it's hard to imagine Congress getting anything done. Paul Ryan can't even get a budget past the House of Representatives right now, and Republicans there are enjoying a historic majority.

Even so, let's humor the argument that Congress decides to act...

Would that really be better?

There are really only two solutions to this problem.

Except, of course, you still lose money.

I read one article that said: “The Social Security Trust Fund, without doing anything more than lowering payout benefits from 100% to 75%, could extend those benefits to citizens through 2087. That's right ... dropping benefits just 25%, even with increasing longevity, a smaller workforce, and a huge number of boomer retirees could yield another 50 to 54 years of viability before more minor cuts may again be needed.”

Oh how comforting! We can eke out another 50 years of payments, if we just cut Social Security payouts by a full quarter. Then we'll just need another “minor” cut of... what... another 25%? Then we just keep cutting and cutting the payout every 50 years until it's not even worth getting.

Whoever wrote that clearly doesn't plan on being alive when that happens. That, or they work for the government and they're trying to warm us up to the idea of taking $885 per month vs. $1,180, today.

This is the kind of thinking we're up against.

I'm not trying to scare you, here, either. I'm trying to warn you.

Social Security isn't solvent. It's just not. Even if you're already getting it today, there's no guarantee you'll get it tomorrow.

So I want to give you some tips, and show you how to maximize your benefits and better fund your retirement.

For example, did you know there was a way to double, or even triple your monthly income, if you’re retired or planning on retiring soon?

I personally know of a super-easy way to boost your monthly Social Security payout from $2,496 before taxes to $3,758.

And I know of another trick that lets your spouse collect on your Social Security benefits, while yours grow.

Another “Social Security Supercharger” I know gives you a reliable stream of income that's immune to stock market fluctuations — protecting your nest egg from a potential crash.

You can find out all about these and more in a new report we just released for Like Minded People.

You can take advantage of this opportunity, and take your retirement into your own hands, or you can trust the government.