The Clock Is Ticking on Taiwan — and WWIII

In one of my favorite movies, Braveheart, King Edward I muses:

“The French will grovel to anyone with strength, but how will they believe our strength when we cannot rule the whole of our own island?”

His point was simple…

If we can’t reign in a renegade province at home, how can we project strength to the rest of the world?

To them, Taiwan is and always will be a part of China. And they can’t show the world they’re a serious global power, much less the preeminent global power, if they can’t corral and consolidate their own territory.

And so the clock is ticking on Taiwan.

That’s the supposed timeline laid out by Xi Jinping, who this week embarked on his third term as president of the People’s Republic of China, making him the longest-tenured ruler since Chairman Mao.

Like Mao, Xi wants to present to the world an alternative form of government — one superior to democracy and to capitalism. He aims to deliver a socialist utopia, a well-oiled machine that sets the bar economically, politically, and militarily.

And it starts at home. Or rather, China’s home away from home, Taiwan.

The wheels of history are rolling on toward China’s reunification and rejuvenation of the Chinese nation, and the complete reunification of the motherland must be achieved and can definitely be achieved… We will work faster to modernize military theory, personnel, and weapons. We will enhance the military’s strategic capabilities.

This isn’t new, of course. It’s an effort that’s been underway for decades.

In fact, most people don’t know this, but China’s navy actually is bigger than ours.

This is because the communist country has been extremely effective at marshaling its resources and building out manufacturing capacity.

China is the world’s biggest shipbuilder and it’s not even close. The country controls 40% of the world’s shipbuilding market by gross tons. South Korea is second with 25%.

With this capacity, China built more warships in one year of peacetime in 2019 than the U.S. did over the entire course of World War II.

As a result, China’s navy has more than tripled in size in just two decades. And it’s expected to have 400 ships by 2025, compared with the U.S. Navy’s goal of 355 with no fixed date.

On the whole, China’s defense spending has increased for 11 straight years. And while the official headline figure was $293 billion in 2021, the truth is we don’t really know how big China’s defense budget is. 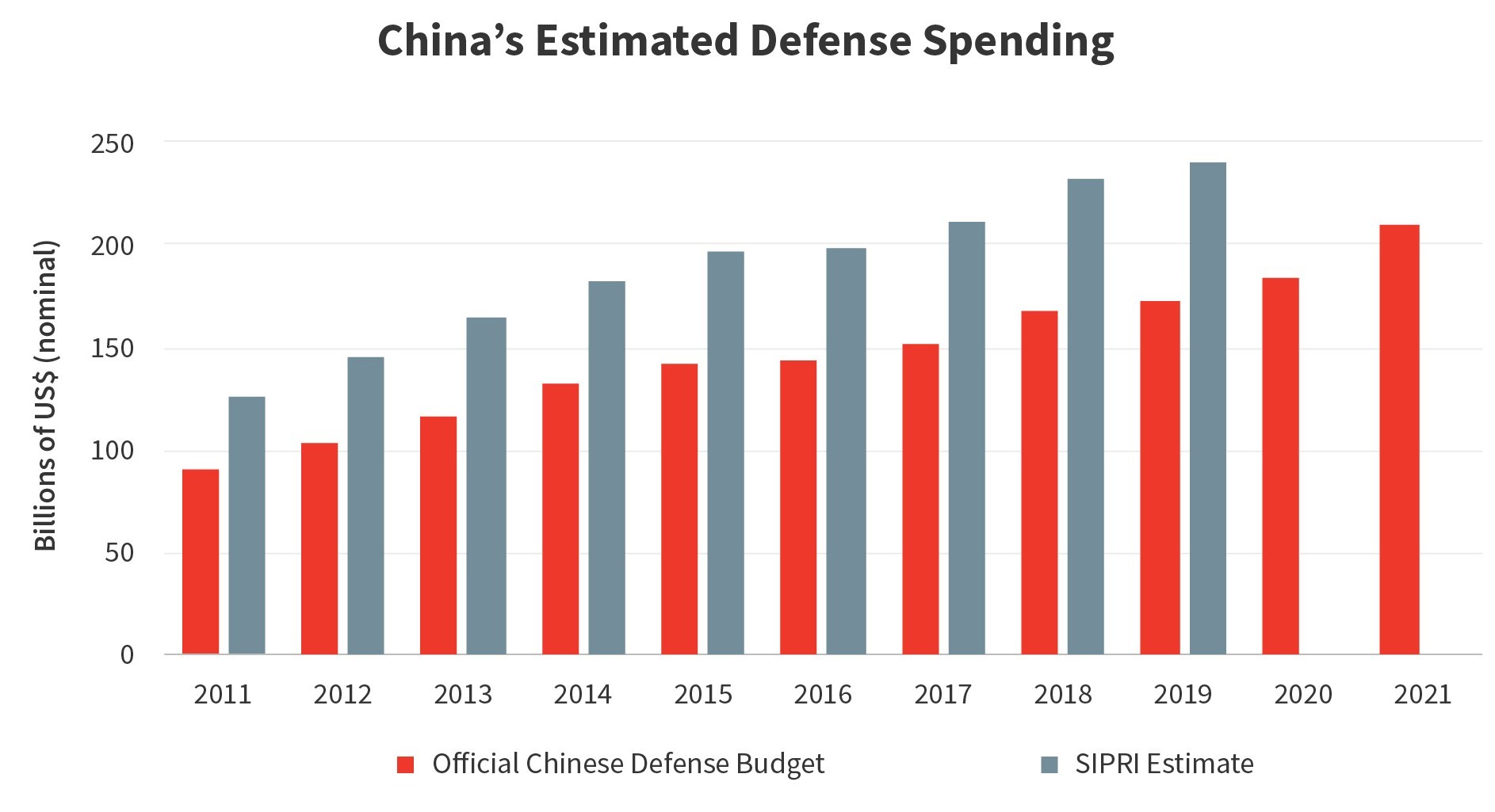 However, we do know that China's capability is significant.

Gen. Mark Milley, the chairman of the Joint Chiefs of Staff, even called it a “Sputnik moment.”

The tests used a “fractional orbital bombardment” system to propel a glide vehicle around the Earth for the first time. It circled the entire globe before crashing down just two dozen miles from its intended target.

To put it bluntly, our missile defense shield is useless against such a weapon. And we don’t have anything similar to counter with either.

Indeed, the United States doesn’t have a single hypersonic weapon (a missile capable of reaching Mach 5 or higher) in its arsenal, whereas China’s DF-ZF warhead entered service in 2019.

But again, it’s not likely China will deploy these weapons against the U.S. — unless, of course, we respond militarily to an invasion of Taiwan.

At that point, anything would be on the table.

That’s why I’ve been aggressively recommending defense stocks for the past five years.

Again, this is not a drill. This is a real and profoundly dangerous weapon that China has developed to ward off U.S. forces in case we do come running to the defense of Taiwan.

It has members of Congress positively shook and military officials begging for more funds to develop a response.

I even found the best way for investors to profit from that funding push with a company that is vital to that countermeasure.