The Clock Is Ticking On America’s Nuclear Dependence

It’s frequently overshadowed by coal (which has long been the key source of U.S. energy output) and renewable sources like solar and wind, which are said to be our future.

But the truth is this: America can’t run on either of these things alone.

For decades, nuclear power has supplemented coal. And it will do the same for renewables for decades to come.

In fact, as it currently stands, nuclear is the world’s #1 source of clean energy.

It’s bigger than solar, wind, and every other renewable energy combined.

As for the United States, we are the world's largest producer of nuclear power. We account for more than 30% of worldwide nuclear generation of electricity.

And after a 30-year period in which few new reactors were built, the U.S. is now expected to have two new units come online soon after 2020, with a total of 24 new nuclear reactors proposed. So our nuclear consumption is set to rise, just like everyone else’s.

However, it should be noted that we are not a major uranium producer.

The result is a shocking disparity between consumption and production — one that leads us to import 97% of our uranium.

That’s right. America only produces 3% of the uranium it uses for nuclear power. And, again, we are the world’s top nuclear power — consuming 25,000 tons of uranium annually. An amount that contributes one-fifth of our electricity.

Now, if you took a look at the chart above, you’d see it wasn’t always like this.

Back in 1980, virtually all of America’s uranium was homegrown.

But then trade barriers were removed, and American producers were undercut by foreign imports.

Our sources aren’t exactly reliable, either.

Russia and its satellite states of Kazakhstan and Uzbekistan account for roughly half of our uranium imports. 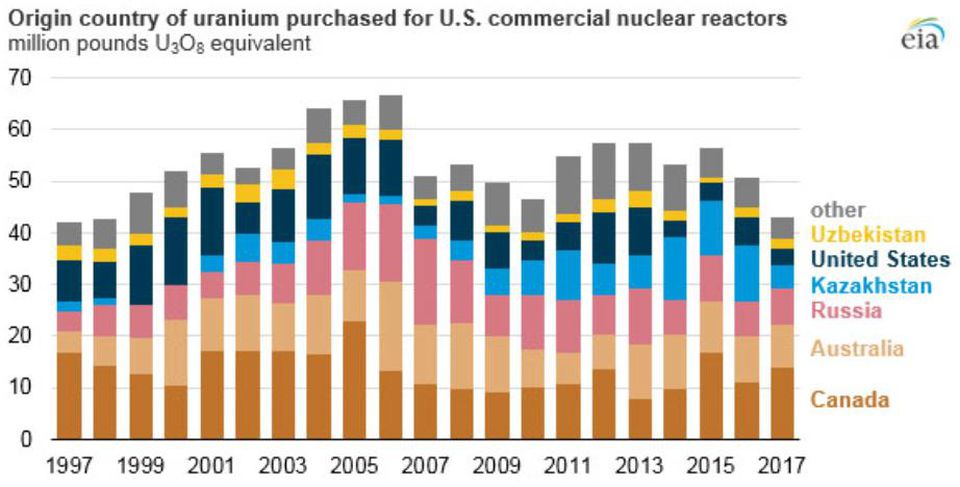 You might even call that a national security risk.

Which is exactly why the government is moving to address it.

You see, a small group of American uranium companies last year filed a "232" petition, asking the Commerce Department to mandate that 25% of the country’s uranium needs be met with American supplies.

These petitions are relatively rare, but there’s been an abundance of them since President Trump took office.

Indeed, the president has been aggressive in his quest to resuscitate fallen American industries.

In April 2017, the Commerce Department opened a 232 investigation into steel imports. Trump imposed tariffs on virtually all steel imports exactly one year later.

The same thing happened with aluminum.

The Commerce Department conducted an investigation, and then Trump put up tariffs on all foreign imports.

You see, once a company or government department files a “232” petition, the Commerce Department has nine months to complete an investigation. The president then has three months to act on these findings.

The window for Trump to act on uranium is coming up.

The report is set to be released, and Trump will be able to act as soon as July 14.

And when he does, it’s going to be a boon for the companies that mine uranium in the United States.

One small company, in particular, has seven U.S. uranium mines, which could scale up to 7 million pounds of production annually. All in less than a year.

That means this one company could more than triple the entire current production of U.S. uranium.

And that’s why our own Nick Hodge recently detailed the profit potential for investors in this report.

It tells you everything you need to know about 232 petitions and the coming U.S. production spike.

You should definitely give it a look if you haven’t already.

By JULY 14: Trump’s “232 Mandate” Will Go Public...
Trump's "232 Mandate" will go public on July 14th, igniting the next energy supercycle. Outsider Club founder Nick Hodge discloses how investors can prepare for this unique opportunity...
Bill Gates: “I can't overstate how important this is.”
Nuclear energy is that important to our future. It's about to get the boost it deserves. If you think we still run on the anachronistic power plants from nearly 50 years ago, think again...
In the Facial Recognition Debate, I Side with Democracy
Earlier this month, San Francisco banned local government agencies from using facial recognition technology. And you know what? I applaud them for it.
Investing in Marijuana Without Getting Burned
The marijuana industry has rewarded scores of investors with life-changing gains.