When Larry Brock stormed the United States Capitol, he did so with malicious intent.

That was made clear by his social media posts, one of which read, "Patriots on the Capitol. Patriots storming. Men with guns need to shoot their way in." 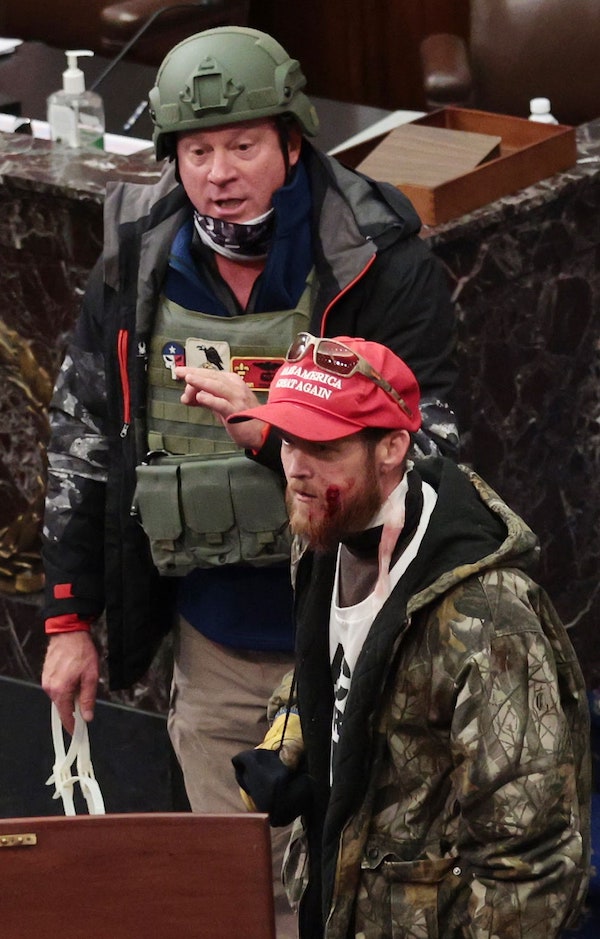 It was also made clear by the helmet, fatigues, and flak jacket he donned, and the zip-tie handcuffs he carried.

Of course, one thing he wasn't wearing was a name tag.

So how could federal authorities come to learn that this man — one of hundreds that stormed the Capitol that day — was Larry Brock, the 53-year-old retired Air Force officer from Texas?

How did they identify this particular needle in what was a veritable haystack of morons?

It's because they got help from a citizen — John Scott-Railton, a senior researcher at Citizen Lab, at the University of Toronto’s Munk School.

Responding to calls from the FBI for tips, Scott-Railton used (among other things) facial recognition technology to ID Brock.

“I used a number of techniques to home in on his identity, including facial recognition and image enhancement, as well as seeking contextual clues from his military paraphernalia,” he told The New Yorker.

Sheldon wouldn't reveal the software he uses, but he told Reuters that it looks for online matches, such as on websites that aggregate mug shots or university alumni lists.

That's how Brock turned up — as a headshot on Alumnius.net bearing his name.

No question, facial recognition technology has become a useful tool for law enforcement, and it's proven invaluable in helping to identify terrorists like Brock.

So far, more than 70 people nationwide have been charged over their participation in the Capitol assault that killed a U.S. Capitol Police officer and four others.

And FBI Washington Field Office Assistant Director in Charge Steven D’Antuono told Reuters that his unit has "opened over 170 case files — and that’s just the tip of the iceberg."

Sheldon calls facial recognition "a great tool," one that helped him unmask mercenaries involved in an attack in Syria as part of his research into global conflicts and disinformation.

Now, he says, it's helped him identify several criminals from the Capitol assault.

The FBI says it's collected more than 100,000 digital images from the violent insurrection. And those images continue to turn up leads as researchers and law enforcement comb through them, comparing a mass of angry faces with sprawling databases of mug shots and social media posts.

Even the Miami police force, located 1,054 miles away from Washington, D.C., has submitted 13 possible names from searches it ran using software from Clearview AI.

Indeed, Clearview is a widely known name in the facial recognition industry, though a controversial name as well.

That's because Clearview uses a database of billions of photographs that it's scraped from public social media pages without the knowledge or consent of the users.

That means if you're Facebook or Instagram page isn't privately locked, they've probably scooped up your photos.

“We have over 3 billion photos that we indexed from the public internet, like Google for faces,” CEO Hoan Ton-That, told IEEE Spectrum. “Use our system, and in about a second it might point to someone’s Instagram page.”

Ton-That also confirmed that Clearview’s customers, including the FBI, were using it to help identify rioters.

Another company, XRVision has also used its facial recognition technology to identify members of QAnon and Nazi organizations.

Initially, false reports suggested XRVision had identified members of the antifa movement in the Capitol mob. But the company was quick to refute those unfounded claims.

The company instead says it's identified two members of known Nazi organizations and a third with promotional ties to QAnon. It's also shared that information with federal law enforcement.

This is why the technology will ultimately succeed, despite attempts to ban it.

Old-fashioned tactics like witness interviews, finger-printing, lineups, and mug shots are well and good, but when it comes to the kind of carnage we saw in Washington, D.C., law enforcement needs more power.

Still, it's a difficult sector for many investors to crack.

In addition to the political blowback and privacy concerns, both Clearview AI and XRVision are private companies.

Of course, even if they weren't I still wouldn't recommend Clearview, which seems ethically dubious at best and is clearly reliant on people not knowing how to (or maybe not caring to) keep their social media accounts private.

It's already being deployed in high-crime hot spots to identify and capture criminals throughout Mexico and Latin America.

It's already been deployed at airports, concerts, stadiums, and other major events — including the Super Bowl — to thwart potential terror attacks.

And it's even been deployed to help detect, trace, and stop the spread of coronavirus.

It's the only facial recognition company I'd recommend, and it's already returned more than 350% to those who subscribe to my newly launched investment newsletter, Wall Street's Proving Ground.

Find out more about that here.