Back in 2015, about a year after Russia annexed Crimea, Russian hackers wrested control of Ukraine’s power grid and cut off electricity at three different companies.

Some 30 substations were switched off, and about 230,000 people were left without electricity for up to six hours.

They didn’t have lights or, in many cases, heat.

Being left without heat in the dead of winter isn’t just an inconvenience, it’s a safety hazard.

And it’s one we might all have to deal with pretty soon.

Because as fall passes and we trek further into winter’s frosty belly, we’re looking at a potential cataclysm of energy supply disruption — a roiling blizzard of sanctions, cyberattacks, and even sabotage that could leave us all in the cold.

It begins on December 5.

Of course, some countries are more reliant on Russia for energy than others, and a collective rush to find supplies elsewhere could lead to a global energy price spike.

So the idea of banning oil and gas imports was quickly watered down to a price cap.

Thus, this week, the European Commission, the EU’s executive body, asked its 27 member states to approve a price cap of $60 per barrel.

That’s well below the Brent crude price (the international benchmark), which is currently $88 a barrel.

It also coincides with the implementation of a separate EU embargo on Russian oil shipments, as well as a similar cap on import prices for natural gas.

Of course, the balancing act between damaging Russia’s energy sector while continuing to patronize it will be difficult, if not impossible. 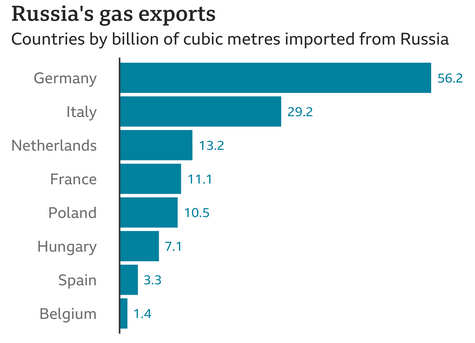 Russia itself certainly isn’t keen to cooperate, either.

Amid the price cap negotiations, Russia said it doesn’t plan to supply oil or gas to any countries supporting a price cap.

And why should it?

The country has already cut its gas supplies to Europe by 88% over the past year, causing the wholesale price of gas to increase by 210% over the same period.

It also apparently sabotaged the Nord Stream 1 underwater pipeline that runs across the Baltic Sea to Germany. That artery had been supplying EU states with 35% of all the gas they imported from Russia.

Obviously, that wasn’t a huge problem in the summer, but that’s likely to change as winter bears down.

And the evolving weather patterns and subsequent forecast for the next month show temperatures dipping even further below traditional norms. 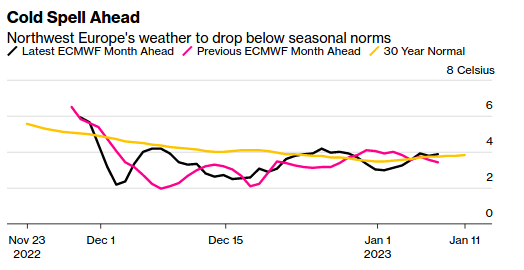 The cold snap couldn’t be coming at a worse time either, as several countries have struggled to make up for oil and gas shortages with nuclear power — which was the initial plan.

France’s state-run power company, EDF, has already shut down more than half of its nuclear reactors after several key pipes were determined to be corroded. Meanwhile, other reactors are running at reduced rates to conserve uranium.

As a result, France may have to resort to rolling blackouts this winter if its electrical grid comes under severe stress.

A similar situation is unfolding in Finland.

There, national grid operator Fingrid is warning of potential power blackouts this winter due to setbacks with its new Olkiluoto 3 nuclear power reactor.

Making matters worse, Sweden — a major electricity exporter — is shutting down its biggest nuclear reactor from December 9–December 18 for maintenance, while another is offline until January 31.

And finally, we can’t rule out a potential attack on power facilities in Europe or the United States by Russian cyber terrorists.

As I mentioned up top, such an attack is not without precedent, and Russia has made it clear that it views the U.S. and Europe as combatants in its war on Ukraine.

Remember, it was just a few months ago that a Russian cyber unit known as Killnet conducted a series of cyberattacks on more than a dozen American airports.

The group jammed up their websites with fake users, forcing them offline. It also attempted to infiltrate JPMorgan’s network infrastructure and assailed websites of three U.S. states (Colorado, Kentucky, and Mississippi).

Countries across Europe, including those that aren’t on most Americans’ radar, have been slammed by Russian cyberattacks as well.

Montenegro, Estonia, Albania, and Finland have been among the hardest hit.

Montenegro was targeted with ransomware attacks so sophisticated that it had to call in the FBI to help out.

Albania suffered a cyberattack so great that it considered invoking Article 5 of the NATO charter, necessitating a collective defense from the alliance.

And Germany's intelligence agency has explicitly warned that Russia may have planted “cyberbombs” in its electronic infrastructure that could be detonated at a moment’s notice.

The end result of all this could be what some are calling a “Black Winter” in which the world suffers a massive energy crisis.

That’s why investors should take action now to protect their wealth from a potential energy shortage.

You can learn more here.