And you can see for yourself how they did:

Now, you may think that the surge in defense stocks was a fluke — a knee-jerk response to Russia’s invasion of Ukraine.

But if that’s the case, you’d be mistaken.

Far from a one-off event, 2022 was just the beginning. It was the opening salvo in what figures to be a multi-year offensive of  global defense spending.

There are several reasons for this.

First, the world is clearly getting more dangerous.

America’s reach and influence in global politics is waning. This has further emboldened bad actors like Russia, China, North Korea, and Iran, among others. And these countries will continue to escalate their attacks on the established Western order.

Secondly, defense spending, especially in European countries, has been woefully inadequate for decades.

Indeed, most of Europe was lulled into a false sense of security by the collapse of the Soviet Union. With no obvious local threat and America’s robust military presence on the continent, Europe slashed its military spending and instead funneled money toward infrastructure and social programs. 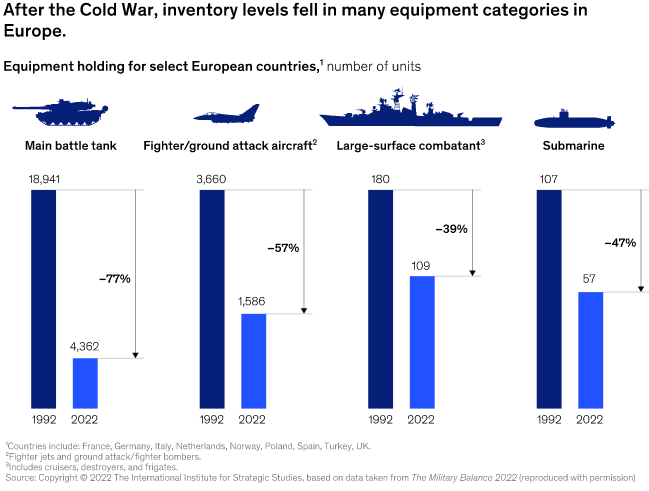 It took Russia’s annexation of Crimea to wake Europe up to the fact that a nation’s defense cannot be taken for granted.

Of course, even then, countries like France, Germany, Sweden, and the United Kingdom were slow to respond.

For them it took an even louder call from President Trump, who sharply criticized our NATO allies for not spending more on defense and even threatened to dissolve the alliance altogether.

That prodded the nations of Europe to take the issue of self-reliance a bit more seriously. But it wasn’t until Russia launched the most aggressive offensive since Hitler invaded Poland that they fully understood the gravity of the situation.

That sparked the biggest increase in defense spending since the Cold War.

The United Kingdom aims to increase defense spending by $22 billion over the next four years.

Germany plans to invest $106 billion in a special arms fund to replenish its long-neglected military.

If they follow through on these measures, the majority of NATO could meet or exceed the group’s defense spending target of 2% of GDP within the next few years.

Just nine do now — and that’s what has to change.

That’s why there’s growing momentum in the alliance to turn that 2% target into a floor.

“Some allies are strongly in favor of turning the 2% goal into a minimum target,” said NATO Secretary-General Jens Stoltenberg. “We will have ministerial meetings; we will have discussions in capitals.”

The members pushing for that change no doubt include countries like Poland, which has been a victim of Russian aggression in the past and never took its eyes off the threat.

Poland already spends 2% of its GDP on defense and is now looking to raise that level to 3% in 2023. The country even has a longer-term goal of reaching 5%.

Finland and Sweden, which are on track to join the alliance this year, will come in with their own robust defense budgets.

The Swedish government’s budget draft boosted military spending by $800 million in 2023, and it plans to increase its defense and security budget by 64% by 2028, from $7.3 billion to $12 billion.

Finland, meanwhile, has targeted a $2.4 billion increase in defense spending from now to 2026 — a 70% increase from current levels.

All of these initiatives helped drive total European defense spending to a record-high $225 billion in 2022.

And that’s a trend that’s likely to continue as all of these countries rush to modernize their own militaries while simultaneously supporting Ukraine’s effort to beat back Russia.

To help compete, the United Kingdom has set aside $2.8 billion to further fund Ukraine’s resistance, making it the second-largest benefactor behind the United States.

Other countries are following suit as well, often to their own detriment.

“We just took our suitcases with money and [are] going like hell around the world and trying to buy,” Gen. Rajmund Andrzejczak, chief of staff of the Polish armed forces, told Breaking Defense. “We know the strategic objective is [to] support Ukraine. This is the strategic objective of [the] state, that was my main mission given. But [due to] the consequences and risks we took, some stores are empty.”

In other words, Western powers have donated so much firepower to Ukraine that they’re now dangerously short on their own stocks.

That’s true of the United States, but it’s even more true of European forces, which were chronically underfunded for decades.

All of these Western militaries will have to restock before adding to their firepower, and that’s going to take years.

Again, this is a process that’s just beginning, as we saw with the $858 billion U.S. defense budget passed in December.

However, that’s not to say this is strictly a European story.

Countries throughout the Pacific, from Japan to Australia to Taiwan in particular, are increasingly unnerved by China’s aggression.

Japan is hiking its defense spending by 20% in 2023 to $55 billion as part of a five-year program to counter threats from China, North Korea, and Russia.

Like NATO, Japan aims to increase its defense spending to 2% of GDP, or $73 billion, by 2027. That would place the country third in total defense spending behind the United States and China.

To the contrary, it was just one more milestone on the path of a new global arms race.

Defense spending is going to continue to surge over the next five years — and astronomically so if and when China finally invades Taiwan.

That makes defense contractors like Lockheed Martin, Raytheon, Northrop Grumman, and General Dynamics “must-owns” in 2023 and beyond.

And if you’re looking for some more exciting growth opportunities in the space, you should check out my Secret Stock Files investment service.

There, I focus on smaller companies that are developing futuristic war-fighting technology that’s yet to go mainstream.

For example, my latest report there details a company that makes head's-up displays for fighter pilots.

Its scopes, displays, and helmet visors use augmented reality to keep war fighters aware of any relevant data without distracting them from their target or mission.

The technology even goes so far as to provide X-ray vision in some cases.

You can find out more about that and my Secret Stock Files investment service here.