The economy might be reopening, but it doesn’t seem to be recovering.

But before I hit you over the head with more inflation talk and the best way to defend against it, something happened in the cryptocurrency world last week that you may have missed.

Now, I’m no social media nut. In fact, I don’t really use any social media. An old colleague of mine used to say social media should come with a surgeon general’s warning... and I agree. But sometimes important things happen on Twitter and TikTok, and this time it’s about Dogecoin.

For a little background, software engineers Billy Markus and Jackson Palmer created the popular crypto as a joke in 2013. It immediately gained attention because of the Shiba Inu logo taken from the “doge” meme circulating the internet.

The developers never intended for anyone to take it seriously, but the meme-based coin took off after being pumped up on TikTok, Twitter, and Reddit. Then celebrities like Snoop Dogg and Elon Musk hopped on board, sending it to its all-time high of more than $0.70 at the beginning of 2021.

In an interview with CNBC earlier this year, Markus said, “The crypto community can be pretty elitist and not very inclusive, and we wanted to make a community that was more fun, lighthearted, and inclusive.”

But last week, co-creator Palmer made it clear he’s become disenchanted with crypto and took to Twitter to deliver some harsh remarks about it and those running the industry today:

Despite claims of “decentralization,” the cryptocurrency industry is controlled by a powerful cartel of wealthy figures who, with time, have evolved to incorporate many of the same institutions tied to the existing centralized financial system they supposedly set out to replace.

The cryptocurrency industry leverages a network of shady business connections, bought influencers, and pay-for-play media outlets to perpetuate a cult-like “get rich quick” funnel designed to extract new money from the financially desperate and naïve.

Cryptocurrency is like taking the worst parts of today’s capitalist system (e.g., corruption, fraud, inequality) and using software to technically limit the use of interventions (e.g., audits, regulation, taxation), which serve as protections or safety nets for the average person.

Palmer’s statement confirms what I’ve written previously about the industry... that it’s now essentially a sophisticated Ponzi scheme and that you must sell your crypto to a greater fool to make a profit. Eventually you’re going to run out of greater fools.

Or you could sell to Glauber Contessoto, the first self-proclaimed Dogecoin millionaire.

Contessoto, who goes by “SlumDOGE Millionaire” on Twitter, posted a screenshot of his Robinhood account (it’s all Dogecoin) in April when it surpassed $1 million. 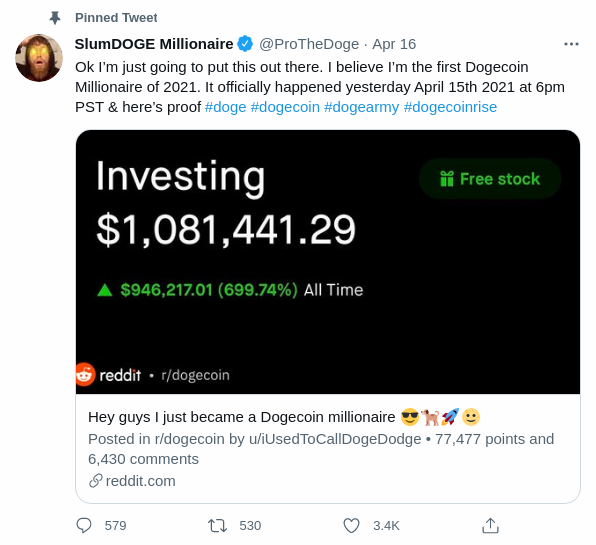 As crypto nose-dived in late April and has since kept diving, Contessoto has lost almost $150,000 and counting. But he’s still buying more, saying that Dogecoin is his savings account. This can’t end well...

The Hidden Cost of Inflation

The problem for those of us not willing to take the added risk of speculating with crypto is that the U.S. dollar isn’t providing much solace these days, and we can see its power deteriorating before our eyes.

We’ve been pounding the table about inflation for some time now. However, it’s largely ignored by Wall Street and the mainstream media because big tech companies like Amazon (NASDAQ: AMZN) and Walmart (NYSE: WMT) have been suppressing consumer prices for more than a decade, creating deflationary pressure in the market and skewing the Fed’s reported inflation numbers.

But as a consumer, you know the cost of goods and services is going up, and we can prove it with “shrinkflation” — when food and commodity prices rise faster than consumer wages, thereby forcing manufacturers to make less product but charge the same amount. Some New York Times economists will tell you it’s no big deal because it affects only small items like candy bars and potato chips, but it's the little things in life that make a huge difference. Since January 2020...

The ramifications of this hidden indicator of inflation are bigger than hot dogs, however. Shrinkflation hits the consumer directly in the wallet, and other industries tend to follow along, from healthcare and technology to entertainment.

As the dollar continues to lose value, you need to put your money where it will grow the most. So instead of buying overpriced goods and services or following the plethora of analysts all trying to unsuccessfully predict the future, you need to follow an expert and use this coming inflation crisis as an opportunity.

That’s why your fellow Outsider and Editor of Wall Street’s Proving Ground, Jason Simpkins, just released his latest findings on the three inflation-proof companies you need to get into now before the dollar’s value decreases even further.

Jason’s predicting something big... an inflation superspike that could potentially bring about the death of the dollar as we know it.

It’s getting ugly out there, but as Jason says, there’s always a bull market somewhere.

Jason’s an actionable, forward-looking analyst. If you stick with him, inflation won’t be able to touch you. His recent stock picks include gains of 137%, 329%, and 661%. That’s all you need to get a wealthy retirement under your belt while everyone else is wondering where their money went.