The Benefit of Investing via Private Placements

The interview was about a resource update that would soon take the company to nearly three million ounces of gold in the safe mining jurisdiction of Idaho.

As it happens, that resource update came out later that day.

Here’s what shares have done since: 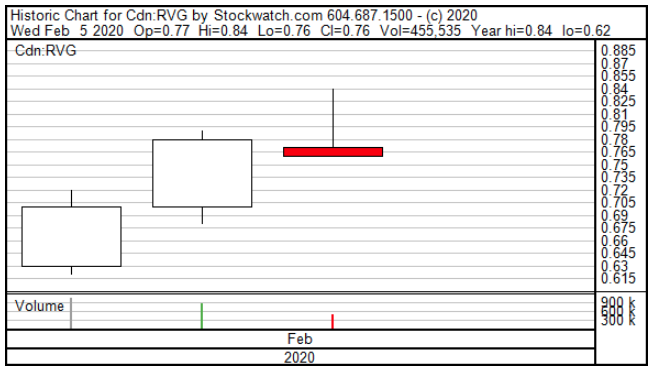 That’s a new 52-week high for the stock.

So anyone who bought Revival Gold in the past year is up. And that includes many Outsider Club premium members.

But some made more than others.

We have different levels of service around here based on risk appetite, investment goals, and themes. The very highest tier — called Nick’s Notebook — offers access to private placements to high-net-worth and/or accredited investors.

In this case, members of Nick’s Notebook and I were able to invest privately in Revival Gold at C$0.30. So when shares went to C$0.84 this week, we were sitting on a 180% gain.

And not only that. One reason — among many — that private placements are so lucrative is that they also often come with warrants. A warrant allows you to buy more stock in the future at a certain price with no downside risk!

They don’t all work out like this, of course. That’s okay. You have no downside risk with the warrant. So when they do work out… you can use your warrant to compound the gains.

Let me give you another quick example.

Tesla (NASDAQ: TSLA) is all the rage right now. It’s gone up more than $100 per day for two days. It’s all CNBC can talk about. It’s cute.

It’s true. Over the past five years, Tesla has been on an incredible run. Shares have gone from $150 to $968 (most of which has come this year). That’s nearly 550%. Respectable.

I found a better way to play the world’s conversion to electric cars. Lots of companies can make batteries and cars.

With this fact in mind, I set out to invest privately in the best-of-breed junior lithium companies at the outset of the lithium boom.

One of those companies was Lithium X, which Nick’s Notebook financed at 15 cents while it was still private.

While Tesla was still stuck at $150 per share… Lithium X was busy getting acquired for C$2.61 per share… and we were busy putting up to 1,640% in our pockets.

It’s taken Tesla five years to go up 550% and people are slobbering over it. We made three times that in less than six months.

Ask me how I know.

Revival Gold on Cusp of Multimillion-Ounce Gold Resource & Mining Restart
While traveling in Vancouver for conferences recently, Outsider Club founder Nick Hodge had the chance to catch up with Revival Gold (TSX-V: RVG)(OTC: RVLGF) President & CEO Hugh Agro...
The Benefit of Private Placement Warrants
Once a year, we open up membership to Outsider Club’s Inner Circle, allowing you to get access to all our publications for one low price. Now is your chance to take advantage of Outsider Club Founder Nick Hodge's proven service...
Tesla Can’t Overcome These Hurdles
If you ask anyone what the future of cars looks like, they’re bound to point to Tesla. According to 78% of automotive executives, they're wrong. Outsider Club editor Adam English explains what the real future of cars looks like...
Investing in Marijuana Without Getting Burned
The marijuana industry has rewarded scores of investors with life-changing gains.