The Australians Are Coming!

I just returned from the 2018 Beaver Creek Precious Metals Summit in Colorado (click here for presentation page) which, according to organizers, drew record attendance despite an overall sentiment that we are in a very unforgiving junior resource space for most companies and their shareholders.

The summit is a great opportunity to speak and meet with companies already on the radar, kick the tires on new companies looking to benefit from the next leg higher in the precious metals space, and exchange ideas with some of the brightest minds in the space.

Outsider Club founder Nick Hodge even scored an exclusive with Rob McEwen. Stay tuned for that.

There’s no doubt that most attendees — whether institutional funds or companies looking to attract their attention — agree that in the near term there is likely to be a bit more pain in the precious metals sector.

Which means that the upcoming tax loss selling season will likely start sooner rather than later, and that everyone should be evaluating their portfolios and figuring out which positions to hold, which to add to, and which positions to take losses on. 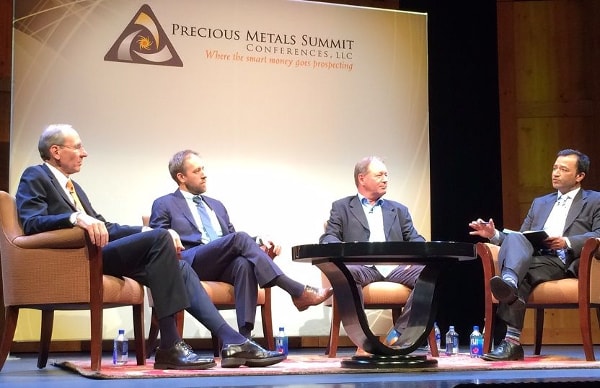 Resource Capital Funds' Josh Parrill who, along with VanEck gold fund and portfolio manager Joe Foster and Sprott’s own Steve Todoruk, participated in a panel moderated by Joe Mazumdar — who I had the pleasure of interviewing — was asked about the private equity group’s approach to this cycle.

He responded by saying:

”What I would say generally is that the market has been bad for many years.

"We think that we're coming out of that … [and] it's a good time to be deploying capital; maybe not a great time to be harvesting capital.

"We are prioritizing gold as an investment space.”

Let’s be clear: if you are buying in this market, you are a contrarian.

Consider that in 2017, a record $750 billion of private equity capital was raised globally. How much went into mining? $3 billion.

It was also abundantly clear that mid-tiers and majors will continue to defer exploration expenditures by taking strategic positions in the junior explorers as opposed to increasing their own exploration budgets.

It’s cheaper, there’s less red tape, and the quality juniors tend to have a better pulse for the local politics.

M&A is likely to continue, though at a measured pace. Most precious metals producers have sloppy balance sheets at best and that has prevented the mid-tiers and majors from taking advantage of this depressed market.

According to mining consultants Surbiton Associates, Australian gold production is at its highest level in two decades.

Surbiton recently reported gold production for the June quarter totaled 81 tonnes, an increase of 9% or 6.5 tonnes from the March quarter and up 8% from the same period in 2017.

Total gold production for the financial year totaled 310 tonnes, its highest level since 1998.

Which means Australian producers are cashed up.

ASX-listed companies are on the trail for everything from early-stage exploration companies to development and production assets.

Several are moving regional headquarters to Denver in an effort to facilitate future deal flow and the Australian presence was felt throughout the conference.

The weak currency and record production has Aussie companies trading at a premium and looking for leverage to the strong profile.

Recent transactions include Australia-based Northern Star Resources adding the Pogo mine in Alaska to its portfolio and investments in quality juniors that are actually exploring and not just mining shareholder money.

Everyone knows my take on the precious metals space. I see another leg down that shakes out the last of the optimists — a true capitulation — and takes gold near the $1,000 level and silver as low as $12.50.

I expect the shorts to cover and that buying will be the springboard that sets off the next leg higher. A banking/bond blowup starting in Europe will send cash into the U.S. stock market, creating new highs. A tiny fraction of that cash will trickle into the precious metals space, setting off a multi-year bull market that will take gold and silver to new real all-time highs.

In the meantime, I’ll repeat one of Rick Rule’s favorite throwaway lines, “you’re either a contrarian or a victim.” I’m buying.

The Next Major Gold Buyout?
For a while now, I’ve been telling you about a very large gold mine here in the U.S. One I expect could become the largest gold mine in the country. This company just received a “white knight” takeover bid this morning, and I spent some of the morning reviewing the details and deciding what to do...
Turkey: The Canary In the Coal Mine
The biggest misconception about the gold price is that it’s married to the performance of the dollar. Follow the money. It usually really is that easy. The money, in this case, leads to the canary in the coal mine — Turkey. Outsider Club editor Gerardo Del Real explains...
It’s Worth $60,000 per Gallon… And You Won’t Believe Where It Comes From
It’s used to test every drug certified by the FDA. And for that reason it’s being called “the medical equivalent of gold.” Here we are in the 21st century and scientists are saying all of modern medicine would be sent back to the dark ages if it weren’t for the blood of this strange prehistoric creature...
Is The Copper Bull Dead?
Just a few months ago, the spot price for copper soared near the $3.30/lb. level and speculators in the space all agreed that copper was the best way to play the mega-trend that is what Outsider Club founder Nick Hodge likes to call “the electrification of everything.” Is The Copper Bull Dead?
Heal Your Ailing Portfolio Body