For years now, investors have been captivated by the growth potential of the solar industry.

Solar power has been growing exponentially, accelerated in the past few years by falling costs for panels.

No doubt, that trend is going to continue.

The Big Three — China, the United States, and India — will account for 70% of that projected growth, or roughly 552 GW of new solar capacity. And again, this will all be added between now and 2027, according to Fitch Solutions, a division of Fitch Group.

China continues to lead the pack.

It’s already sailed past its 2020 target of 105 GW of cumulative installed PV capacity, and is now revising its target upwards to 210-270 GW — more than double the original estimate. The country is set to reach 357 GW by 2027.

Throw in Japan, India, Taiwan, and South Korea, and the Asian market as a whole will comprise 60% of global solar capacity in 2027.

According to the latest statistics, India installed 4.9 GW of solar, surpassing the United States, which installed 4.7 GW, to become the second-largest solar market in the first half of 2018. It's second only to China’s 24.3 GW.

Japan, Taiwan, and South Korea are also set to be among the top 10 fastest expanding solar markets globally over the 10-year forecast period, Fitch says.

Consequently, it expects that a total of 63 markets will add more than 100 MW of solar capacity over the coming decade.

Meanwhile, solar capacity in the United States is poised to double in just the next five years, with more than 14 GW of PV capacity installed annually. And Europe is expected to add 16.5 GW by 2025.

But now, here’s the thing…

Solar panels aren’t the best way to play this trend. There’s a better way for investors to pocket higher returns than what solar companies will provide.

And that’s because there’s a separate, ancillary market that will see even more growth and greater profits.

Indeed, costs aside, the biggest problem with solar panels has always been that they’re virtually useless at night, or even on especially cloudy days. If the sun’s not shining, users have to draw power from the local grid.

Hence the need for an energy storage battery that can collect excess energy during prime daylight hours so it can be tapped when needed.

Unfortunately, like solar cells, costs have traditionally been a problem. Batteries were simply too expensive, too big, and too inefficient to meet the task.

Now, though, things are changing.

Battery costs have come down substantially. That’s good news for solar, but even better news for the energy storage market.

Citing the tumbling cost of batteries, a new report from Bloomberg NEF (BNEF) says the global energy storage market will attract $1.2 trillion in investment from now until 2040.

“We see energy storage growing to a point where it is equivalent to 7% of the total installed power capacity globally in 2040,” says Logan Goldie-Scot, head of energy storage at BNEF. “The majority of storage capacity will be utility-scale until the mid-2030s, when behind-the-meter applications overtake.”

These battery installations will be standard at big businesses and industrial parks, as well as millions of residential homes. And they’ll perform a number of tasks, from shifting grid demand to reducing electricity costs, to storing excess rooftop solar output, to improving power quality.

Heck, if you generate and save enough solar energy, you could even sell it back to the power grid for a profit.

So join Outsider Club today for FREE. You'll learn how to take control of your finances, manage your own investments, and beat "the system" on your own terms. Become a member today, and get our latest free report: "How to Win With Vanadium: The Metal That Will Replace Lithium."

As with solar, China, the U.S., India, Japan, Germany, France, Australia, South Korea, and the UK will be the leading countries, representing two-thirds of the installed capacity by 2040. South Korea is expected to dominate the market early, with the U.S. taking over in the early 2020s, which in turn, will be overtaken by China by 2040.

In all, the battery storage boom is projected to surge a whopping 10,000%. 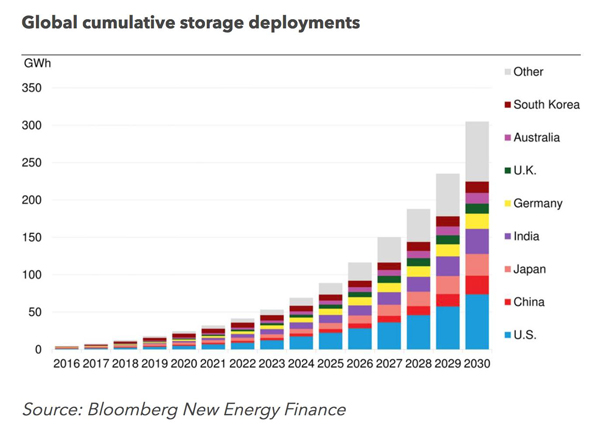 Bloomberg Energy says it will “double six times over.”

That’s the rate it will take to keep pace with massive demand in solar and wind.

And in fact, that’s exactly the same as solar’s meteoric rise over the last 15 years.

So as you can see, this nascent market has far more growth potential than solar itself.

But here’s the real key: The batteries won’t be powered by lithium, or cobalt, or anything else you might have heard of.

They’ll be powered by vanadium — or what the BBC calls “the metal that may soon be powering your neighborhood.”

It’s already replacing those other metals in electric cars and it has a variety of other applications.

For that reason, vanadium demand is soaring. And the country that needs it most, China, is rapidly reducing its export.

That’s a problem, because as it stands now, America currently has NO producing vanadium mines.

However, our own Nick Hodge has found a tiny company (trading at just $0.50 per share) that’s set to open one in short oder.

That play could deliver investors early gains of at least 3,900%.

Better still, he just released a full report with all the details, which you can find right here.