It looks as though Congress is finally on the verge of passing the long-awaited second coronavirus stimulus bill.

But before anyone gets too excited I feel compelled to remind you how the last one went.

Despite all the media hype surrounding the $1,200 stimulus checks (not much when you consider the average monthly rent in America is $1,468), you should remember the program was overwhelmingly a slush fund for the well-banked, well-lawyered, and well-connected.

Just to give some perspective on that: The grand total for all of those individual checks came to $290 billion, or roughly 13% of the $2.2 trillion package. The rest was dumped off to corporations, billionaires, and members of Congress.

The fraud was so brazen that initially, the Trump administration refused to disclose where the money actually went. But after months of FOIA requests, we finally found out.

The most glaring waste was in the Paycheck Protection Program, which totaled $669 billion.

The program was supposed to pay small companies to keep their employees on staff for eight weeks. But overwhelmingly the money went to large chains.

Shake Shack, Ruth's Chris, Famous Dave's, Ruby Tuesday, P.F. Chang's, TGI Fridays, and Five Guys, as well as franchises representing McDonald's, Wendy's, and Yum Brands, all dipped in, snagging loans of $5 million–$10 million — despite that fact that many of these businesses are backed by private equity.

In fact, more than half of the money from the fund set up for "small" businesses went to just 5% of the recipients. 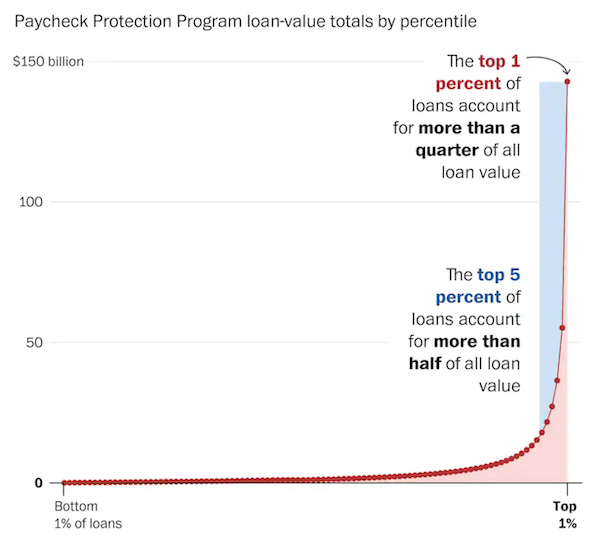 This was in part because private banks with their own profit motives were the ones entrusted to carry out the lending, and the fee structure awarded larger fees for the bigger loans.

It was also because those larger firms had the lawyers, accountants, and lobbyists to exploit the program that they themselves created.

Indeed, several members of Congress and the White House personally benefited from that generous spring stimulus.

Businesses at properties owned by the Trump Organization and President Trump’s son-in-law Jared Kushner’s family received more than two dozen PPP loans worth more than $3.65 million. (No wonder they wanted to keep it a secret.)

And that money did NOTHING to retain jobs.

Indeed, one loan for $2,164,543 went to the Triomphe Restaurant Corp. — located at Trump International Hotel & Tower in New York City, which closed.

That was actually something of a trend in the data, as many companies said they “retained” far more workers than they actually employ. In some cases, the Small Business Administration even reported protecting a number of industry jobs that exceeded the total number of workers in a given sector.

"For more than 875,000 borrowers, the data showed that zero jobs were supported or no information [was] listed at all," reports The Washington Post.

And beyond Trump and Kushner, several members of Congress raked in cash on behalf of their "employees" as well.

Politico reports that Texas Rep. Roger Williams, one of the wealthiest members of Congress with a net worth of more than $27 million, "received a PPP loan for an undisclosed amount for his Roger Williams Chrysler Dodge Jeep dealership" — the same dealership that employs his wife.

Similarly, as listed by Newsweek...

That's why less than a third of the money intended for "small businesses" was distributed in amounts less than $150,000.

Furthermore, the CARES Act delivered $82 billion to millionaires and billionaires through a tax loophole that let them use pass-through entities to lower their taxes by deducting as much as they want against income unrelated to the business.

And it sent out more than a million stimulus payments, worth about $1.4 billion, to dead people.

This is what these stimulus packages do. They deliver huge handouts to corporations, donors, and politicians. Then those same people go on television and call modestly larger unemployment benefits "handouts to the lazy" and concern-troll about the deficit.

They pat themselves on the back for the $1,200 checks being sent out to struggling Americans and then they cash in six-figure "loans" that won't ever be paid back.

So don't let all the talk surrounding this second stimulus snow you under. It's the season of giving but only for some.