Some Perspective on Gold and Stocks and Global Markets

The gold bull market we’ve long told you would come and prepared you for is here, with prices hitting $1,500 per ounce today.

That’s a nice, round number that gets people’s attention. There will be more gold experts soon, as happens with these things. 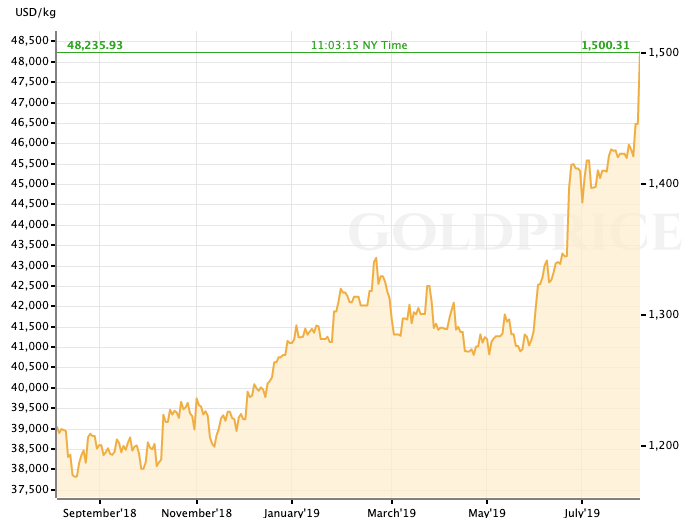 But we are still very early in this cycle. So I thought I’d offer some points for perspective.

1. Precious metals stocks have been in a projected bear market since they topped out in 2011. You’ll recall gold and related stocks performed spectacularly in response to the financial crisis in late 2008 through 2011. But after 2011, gold stocks lost as much as 80% of their value.

2. After 2011, investors no longer needed precious metals as a safe haven because the world’s central banks, led by the Federal Reserve, had undertaken the largest monetary experiment the world had ever seen with quantitative easing and bond buying and expansions of balance sheets and plunge protection teams. It worked — kind of. Unemployment went down, but the new jobs didn’t pay as much as the old jobs. Stocks went up, so white-collar folks made killings, but most people don’t own stocks. As a result, what we’ve seen is a papered-over recovery.

3. Many pontificators, including your editor, have long said this central banking experiment was unsustainable, a house of cards, etc. But no one could know when the game would be up. Central banks have been able to maintain appearances longer than most thought possible. But their credibility is now paper-thin, and even the most gullible are starting to see through it. German 30-year bonds dipped into negative territory last week for the first time ever. The. First. Time. Ever. The endgame is revealing itself. Investors are now wondering how quickly that could come to the U.S. You know what is safe and doesn’t have a negative yield? Gold.

4. Banks are in a very tight spot. The Bank of Japan owns 40% of Japan’s outstanding bonds. It also owns 4.7% of all stocks on the Tokyo Stock Exchange. Put another way, it was a top 10 shareholder in 50% of all Tokyo-listed stocks as of earlier this year. Negative yields and a stock crash would literally take down that institution. Private banks aren’t any better off. We have written to you about Deutsche Bank having to recently split itself in two to create a “bad bank”, closing down its equity sales and trading business, and laying off 18,000 people by 2022. There will be more of that. Banks can’t make money with negative yields.

That’s it, really. We are only now seeing the beginning of this unwinding. Stocks are already back to 2017 levels. Gold has shown incredible strength of late, and has much higher to go just to get back to 2011 levels, let alone new all-time highs in U.S. dollars. Stocks have a bit of room to go lower. 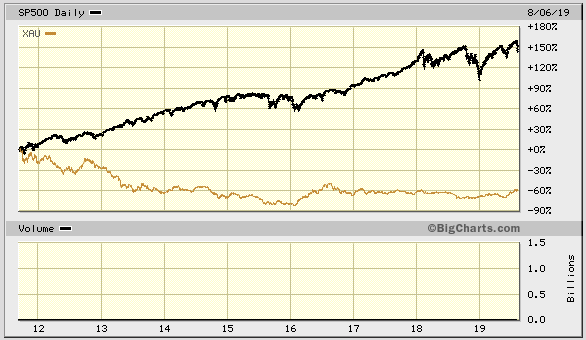 I will have a feature-length video out for you next week explaining all these points in much greater detail. A billionaire will join me and reveal what he’s doing with his money and gold. And I’ll reveal the stock I’ve recommended to my paid readers that I think could deliver many multiples in the sustained gold bull market we’re about to see.