Today we're bringing you something special from our Founder and President, Nick Hodge.

He is sharing a recommendation from his latest issue with everyone to let them get a feel for what he has to offer through Wall Street's Underground Profits.

This was published a couple weeks ago and, if you were a member, you would have been able to get in under Nick's recommended price.

If you want to get Nick's latest recommendation, sent just a couple days ago, you can check it out here.

The world is being electrified. That is a big truth. Cars, yes. But also everything else. Devices — even once mundane ones like toothbrushes — are now “smart.” They’re wired. They’re internet-connected.

And it’s a trend that’s not going to slow down.

Above all, though, it means we’re going to need much more copper. 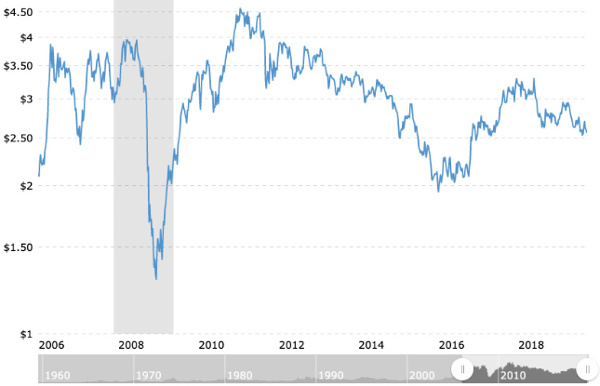 The economic doctor doesn’t like what it’s hearing through the stethoscope. An imminent acute recession or not, the world is going to need significantly more copper in the future.

Greta Thunberg is no longer a girl but an icon. People would burn votive candles in front of her picture, but that would add to the emissions burden.

So why does nobody want to buy the copper required for a greening world? Over the past month every global forum with a serious carbon footprint has agreed we have to stop emitting that stuff.

Renewable energy resources have been nodded at by all these assemblies of respectable and important people. Wind and solar, though, requires three to 15 times as much copper per unit of output as fossil fuel generation. This is after decades of technological development and efficiency improvements.

Copper content, though, is hard to engineer away. The easy substitutions of aluminium have already been done. Copper is just too heat- and electricity-conductive to be wished away.

Yet the price of copper tried, feebly, to get out of its sickbed at the end of the summer, only to fall back again after the middle of September. At the beginning of October, the LME copper price has barely kept above $5,600 a tonne. That is above the cash operating costs for existing mines, but nowhere near enough to draw investment to new mines, assuming someone has found the stuff, measured the deposit, laid out transportation and water supplies, and arranged all the permits.

Mining equities prices are drifting to the sea floor, their remains only retaining some buoyancy through their inclusion in ETFs and broad indices. Oil and gas exploration and production companies may have their ups and downs, but at least there’s a market for shares in those with operating cash flow and positions in the right producing basins.

Paul Gait and his team of metals mining analysts at Bernstein in London have come up with estimates of the copper price levels needed to finance new mines. “We believe copper needs to be priced at $8,800/tonne, or a 40 per cent uplift, to meet the government-agreed 2030 targets for decarbonisation.”

If you believe the current consensus targets are not adequate, Mr Gait and his team have a more ambitious “Greta Scenario” for complete decarbonisation by 2025. That would require no less than $20,000/tonne to produce the required copper.

Sorry for the long block quote, but that was important. It’s saying that copper prices have to rise 40% just to meet current renewable energy targets.

On the high side, it’s saying a 257% increase in copper would be needed to convert the global electricity-producing fleet. It also said that mining equities have drifted to the sea floor.

So we have a great setup here for copper going forward. We’re already in Teck and Ivanhoe, both of which give us copper exposure.

We’re going for more with Rio Tinto (NYSE: RIO). Here’s how the company bills itself:

From our diverse portfolio, we supply the metals and minerals that help the world to grow. Our major products are aluminium, copper, diamonds, gold, industrial minerals (borates, titanium dioxide and salt), iron ore, and uranium.

Our 47,000 people work in around 35 countries across six continents. We are strongly represented in Australia and North America, and also have significant businesses in Asia, Europe, Africa and South America.

This single operation alone comprises nearly 8% of annual copper production, and with one of the top producing copper mines in the world with more than 20 million tons produced to date. 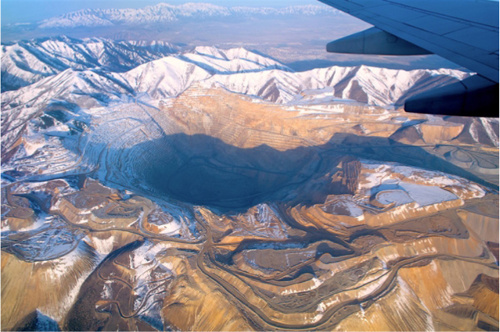 But what’s coming next is bigger.

The Resolution Copper project is owned 55% by Rio Tinto and 45% by BHP Billiton.

It is an absolutely giant copper mine in Arizona that, when built, could supply 25% of U.S. copper demand each year. It’s one of the largest untapped copper deposits in the world.

Resolution is currently going through permitting, with a Draft Environmental Impact Statement (DEIS) released by the government in August 2019. The Forest Service is then expected to finalize the EIS and issue a draft Record of Decision in Summer 2020, with a final Record of Decision expected in late 2020 or early 2021.

Resolution contains 1.6 billion tonnes grading 1.47% copper and 0.037% molybdenum. It’s expected to produce 500,000 tons per year of copper when constructed, making it the single-largest copper-producing mine in North America.

While most of its revenue comes from aluminum and iron ore, these two quality projects give the company a real foothold in the copper space as well. And I like that both the assets are in the United States.

Rio Tinto also has a 30% interest in the Escondida mine in Chile, which is managed by BHP. It is the largest copper-producing mine in the world.

It also owns 51% of Oyo Tolgoi in Mongolia, already one of the largest known copper/gold deposits in the world with exploration ongoing. Just with current reserves it is expected to operate for over 50 years.

Rio Tinto currently has a market cap of $61.7 billion. Its current P/E ratio is 6.25, making it appear to have significant upside compared to the S&P 500’s current P/E above 21.

What really pushed me over the edge to recommend it, though, is the current yield over 6%. That’s tough to come by in today’s market, with many bonds paying negative yields.

Shares have traded between $44 and $64 over the past year, and are currently at the lower end of that range.

Buy Rio Tinto (NYSE: RIO) as a long-term hold with dividends reinvested. Buy it under $52.00.

To get more insights and full issues from Nick, as well as see his #1 gold pick right now, check out this Wall Street's Underground Profits Special Presentation.

James Dines: One Thing Baffles Us
While we’re grateful we have led you to the few metals that have been rising, we are concerned that some kind of debt or currency storm might be gathering.
Investing in Marijuana Without Getting Burned
The marijuana industry has rewarded scores of investors with life-changing gains.

1 Beat the Herd 2 Gold Is the Ultimate Haven 3 What Ever Happened to Pot Stocks? 4 Stealth ID Is Safeguarding Schools…... 5 Sneak Peek: Junior Mining Monthly on...

1 Beat the Herd 2 Gold Is the Ultimate Haven 3 What Ever Happened to Pot Stocks? 4 Stealth ID Is Safeguarding Schools…... 5 Sneak Peek: Junior Mining Monthly on...