Signs of "The Coming Currency Crisis"

As he puts it himself. "please do not turn this page, or allow your eyes to glaze over, because this has crucial significance."

Read on for an excerpt from The Dines Letter and to see what he means.

"When smashing monuments, save the pedestals, they always come in handy." Stanislaw Jerzy Lec

Not everybody fully comprehends how crucial the dollar is to America’s being “rich and powerful.” America can just print any amount of money it desires, as worldwide demand for its best-of-the-bad currency increases its purchasing power.

America could also use its control of the dollar to “sanction” other nations, even more effective than limited military power, threatening to cut any nation out of the world’s monetary banking system, which could be financially ruinous for violators. While Wikipedia lists 36 countries under U.S. sanctions, we focus our attention on 19 countries officially being sanctioned by the U.S. Treasury: notable are Russia, Iran, Cuba, North Korea, Syria, Venezuela, Libya and Yemen, accounting for 400-million people. Unofficially, if you add the new tariffs on China, 1.8-billion people are affected by American sanctions, on a planet of 7.7-billion.

The U.S. dollar does have its vulnerabilities. TDL has never been a political letter, but has always definitely been focused on financial and investment opportunities. One specific recurring topic has been — please do not turn this page, or allow your eyes to glaze over, because this has crucial significance — currencies. Too few are even remotely aware of what currencies really are despite their importance. We’ll try to keep it simple.

The nature of currencies as they exist today is critically important. Why has TDL so openly rebuffed current paper money worldwide? Why should the simple paper dollars in your pocket or purse be deserving of TDL’s ire, when their value doesn’t seem to change from day to day? TDL was founded on its vision that the single-most important economic event of 20th century was cutting paper money’s link to gold. That fatal flaw fouling the world’s finances is governments printing money without anything of tangible value linked to it. How could wealth be created just by printing pieces of paper without limit, instead of earning it with some kind of work or asset? We don’t expect many to agree with us on that yet, so we’ll just let that stand.

Understandable, since the subject of money is not really taught in schools — and economics courses are grossly inadequate because of their vested interest in unlimited overprinting of money. It took us years to piece together how the current “Coming Currency Storms” began and have evolved.

We wrote Goldbug! for serious gold students; the full unabridged book detailed our thoughts as they evolved, in order for newcomers to learn to prepare for the next big discovery. One of TDL’s life disappointments is that our Goldbug! book is not used as a textbook — it was written to be that. The second half of the unabridged edition of Goldbug! shares how we figured it out, painful step by step, a “case book” method of learning popular in law and business schools, how to discover new areas in the future for yourself — especially valuable to financial people and serious market students worldwide.

The world is sliding toward “The Coming Currency Crisis,” revealing the significance of gold and silver, and those who ignore it will risk losing their wealth. The first crack in the façade of the unbacked paper currency system was Bitcoin, an electronic form of money. We took one glance at it and recognized it for what it was, because we had been predicting its advent, realizing its relevance even during Bitcoin’s early ominous days when its unsavory reputation had deterred others in the mass media from acknowledging its importance. We boldly declared ourselves “The Original Bitcoin Bug,” and advised taking a small position in Bitcoin, because of its enormous potential, and planning to hold it permanently — as a haven during a possible worldwide currency upheaval. Cryptocurrencies are fluctuating freely, but none are used fully as a currency — yet. 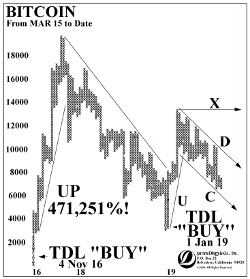 Bitcoin provided the opportunity of a spectacular profit of 2,714% from TDL’s first recommendation at $703, to a subsequent high of $19,783 on December 17, 2017. The subsequent crash bottomed at $3,237 on December 15, 2018. Amidst despair, Bitcoin paradoxically rose again, along with Mass Optimism, with its price quadrupling as of last June 2019. Then it turned down yet again. Please see the chart of Bitcoin to the right. A rise above line (X) would signal a probable new upwave.

There are already around 18-million Bitcoin now in existence, and only 21-million that could ever be mined, so penetration of (D) would likely be a good time to park a little long-term capital there. TDL still favors placing an equal amount of capital in each of these 5 cryptos: Bitcoin, Ethereum, Bitcoin Cash, Bitcoin SV and Litecoin. A nice diversified portfolio, hoping at least one could rise big time, over time. And get you safely across a border.

So join Outsider Club today for FREE. You'll learn how to take control of your finances, manage your own investments, and beat "the system" on your own terms. Become a member today, and get our latest free report: "James Dines: A Prediction Too Terrifying to Believe, Too True to Ignore."

Bitcoin, the original crypto, has been around for 10 years now, and governments are still trying to figure out how to treat cryptocurrencies. Should they be banned outright, or their use be regulated? Are they investments, a digital currency, or something else? And as governments require their cut, how should taxation be applied?

As use of cryptos has proliferated, opinions on how cryptos should be handled have evolved. As one example, the Royal Bank of Canada, a bank that had previously prohibited its customers from purchasing cryptos, is now considering creating its own crypto exchange. Some large corporations, including Facebook, JP Morgan, and Wells Fargo have also become interested enough to have contemplated creating their own. All are increasing signs heralding “The Coming Currency Crisis.”

China’s central bank has been considering the creation of a digital yuan for at least five years. Its digital yuan would be defined as a “stablecoin,” which is a digital currency backed by reserve assets, to discourage large price fluctuations. So stablecoins are not exactly “traditional” cryptocurrencies, but are more like a digital version of commodity-backed paper currencies. And we know what stables are noted for. China’s proposed digital yuan would be issued by, and backed by the People’s Bank of China, its central bank. Similarly, Facebook’s proposed Libra would actually be a stablecoin as well, using blockchain technology to enable transactions, and be backed by a basket of securities and paper currencies. China likely has Big Brotherly interests in making a national digital currency because it would enable government access to all transaction records. China has been moving toward a cashless economy anyway, but a digital yuan would enormously further its ability to surveil, and perhaps financially restrict its citizens.

U.S. central bankers are also considering their own crypto, currently attempting to “analyze the costs and benefits of pursuing such an initiative,” according to Fedhead Jerome Powell. The Fed most likely prefers “paper money,” so it could easily print more anytime. The fact that a digital currency is being considered at all reveals three things. One, cryptos initially dismissed and put down by banks and governments, have become acceptable enough now to be taken seriously. Two, the Fed might be concerned that the U.S. dollar would be usurped as the world’s reserve currency by Bitcoin, or another crypto, and it preemptively seeks to avoid being left behind. Perhaps it already has been. Third, all this attention around currencies is, to us, a confirmatory sign of our predicted currency malaise in the world.

The currency revolution of cryptocurrencies has only just begun. Our interpretation of these blades of grass in the pavement’s cracks is that there is at least a subconscious concern about holding paper money, and how to hedge against a possible flight from paper. We perceive an aching under the world’s skin to wriggle out of the trap of paper currencies. Meanwhile, one useful but disparaged currency, majestic gold, has been waiting patiently.

A TDLer might fairly inquire, if the above is well reasoned, why has TDL been on a “Buy” signal for the U.S. dollar. Actually, we take some quiet pride in that “Buy” signal, near the U.S. dollar’s rock bottom. We recommended U.S. dollars as the least-bad paper currency, because its overprinting has been kept to comparatively low levels. Plus, so many have been printed and used worldwide that it has become an international currency, even linked to by nations such as Hong Kong. Troubled areas like Venezuela and Zimbabwe also find widespread adoption of the U.S. dollar — evidently not trusting their own overprinting-crazed economists.

Could anything stop the slow death of paper currencies? It’s too late for a gold standard; the amount of paper printed has grown way too large. So a correction of paper money is coming, and usually a flight out of paper goes to gold — that’s a real reason gold has been up.

There will be a reversion to real money — gold, silver, possibly cryptocurrencies and other havens. That’s our logic, and governments won’t challenge it because it would call attention to the Project.* Not only are governments maxed out on debt, entire populations are getting poorer by the day holding on to their devaluing currencies. That’s how we predicted the Asian currency crisis of 1997, when it started in Thailand before Mass Contagioning internationally. TDL also predicted the 2008 crash, yet another surfacing of the gathering underground fury.

TDLers should protect themselves from “The Coming Currency Crisis” with some gold and silver stocks and perhaps some precious metals as a hedge. Especially when we turn bearish on the U.S. dollar, a signal that might have deep meaning. We hope not, but hope is not a plan.