Risk Is Spiking, and Bankers Know It

The stock market built on Wednesday’s reversal and rallied Thursday, ahead of Friday’s key jobs report. Investors were hoping for a strong jobs report, so we saw more short covering again on Thursday.

It turned out to be a disappointing report. Forecasters were only looking for 170K or so new jobs in March versus the 313K new jobs reported last month. The report showed only 103K.

A low jobs report could have helped the stock market rally, lessening fears of inflation and more rate hikes, but it came alongside escalating trade rhetoric between the U.S. and China.

Friday saw the Dow drop over 700 points with only a couple hours left of trading as we went to press.

We learned Thursday that the U.S. trade deficits continue to grow worse, so you can understand why President Trump is fighting for fair trade. 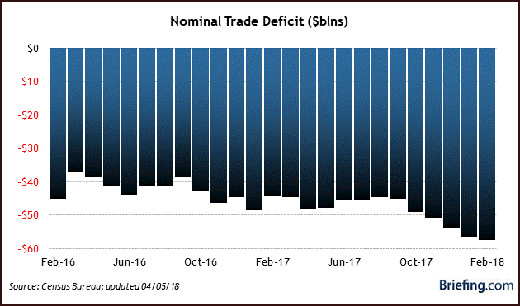 This is an important chart because the deeper deficits grow, the more it depresses U.S. GDP growth.

The most recent report on Thursday showed the deficit growing to $57.6 billion from $56.7 billion in the previous month, so it is worsening.

Some of the latest U.S. GDP reports I am seeing from forecasters are as low as 1.56% for the first quarter. That would mark a significant slowdown from the previous quarter.

It would also be well off the earlier reports of +5.0% in January, and would confirm higher interest rates are slowing down the economy.

Public debt is soaring in 2018, suggesting more and more people are struggling to make a go of it. It is a strong indicator that the economy is struggling. 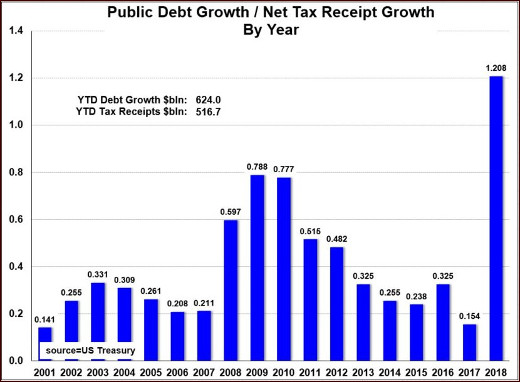 We are not talking about a modest increase but a massive spike in public debt, and that tells us we are approaching serious economic trouble.

Notice that, with soaring debt, the savings rate is plummeting as the consumer continues to struggle. 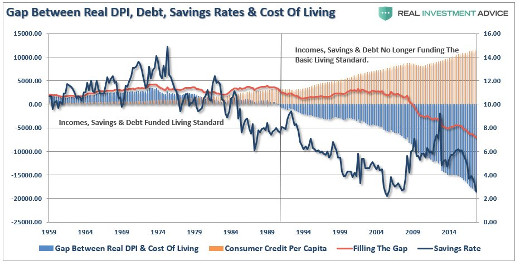 When you combine incomes, savings, and borrowing power (consumer credit per capital), the gap to maintain the current standard of living is falling.

This is the real reason why growth is struggling.

As the Fed hikes interest rates, this gap will only widen further.

Near term, the Dow 30 index will be dealing with resistance at the 50-day moving average. Even if it's technical levels are breached, the index has not been able to persist at those levels, beyond a day or two, since peaking in late January.

On the other hand, overhanging resistance at the 50-day moving averages will be even stronger now and any further disappointment will help bears get a leg up on the bulls.

Plus, there is $30 billion yet to be sucked away by the Fed in the third week of April. All of this makes the stock market very unstable.

Bankers know risk is now at threatening levels, which is why the Libor/OIS spread is spiking so dramatically.

The rate by which banks lend to one another is spiking because uncertainty of a potential recession can’t be ruled out when short- and long-term rates come close to inverting.