This Labor Day, put your money to work for you...

Finally, the end of another humid Maryland summer.

The mornings are cool, the leaves are starting to fall, and I can smell the pumpkin spice in the air already.

This Labor Day weekend also marks the end of extended federal unemployment benefits for many U.S. workers affected by the pandemic...

Well, if we know one thing about the current president, it’s that he loves sticking to arbitrary deadlines...

But just like what happened in Afghanistan, the White House lawmakers probably didn’t take into consideration how quickly a crisis can escalate.

Right now, the delta variant accounts for 83% of COVID-19 cases in the U.S., and yet another strain has emerged in South Africa, the C.1.2 variant. Just last week, the Supreme Court ruled against the CDC’s eviction moratorium, putting hundreds of thousands at risk of losing their homes. And as the cool weather brings flu season, we can rightly expect more people getting sick this fall and winter, which will adversely affect the workforce.

Unemployment has declined in recent months, but it’s still above pre-pandemic levels. You’ve surely seen the “Help Wanted” signs around town, so you know we have a bit of a labor crisis on our hands.

So how is unemployment decreasing when it seems like so many jobs are left unfilled?

Well, it’s thanks to a little-known technology that’s sneaking in behind the scenes, and it’s able to decrease unemployment while at the same time create new jobs...

And neither the Fed, the White House, nor the fat cats on Wall Street are factoring it into their equations... yet.

Free Money for All Some

To recap, in March 2020, President Trump expanded unemployment benefits through the Coronavirus Aid, Relief, and Economic Security (CARES) Act, which gave benefits to those previously ineligible, including freelancers, gig workers, and the long-term unemployed (those out of work for more than six months). Currently 3.4 million Americans still fall under this category.

The Trump-era policy allocated $600 a week of extra funds to the unemployed. When those benefits expired in July 2020, they were extended to include just $300. President Biden extended the program again in December to include the same number.

Biden has urged states to continue providing support to the unemployed through leftover emergency COVID-relief funds, but most states have already earmarked that money for other projects.

On one hand, it makes sense to end the program, as continued unemployment claims have dropped to “normal” levels...

And as we can see from the jobs numbers Friday, unemployment is down but job creation missed estimates, creating a mixed reaction in the broad markets.
You'll Never Be On The Inside!

Remember that the stock market is a forward-looking indicator. Generally, the news you’re hearing on the boob tube is already baked into stock prices.

So investors seek to glean information about future growth and earnings (the primary catalysts for short-term price movements) anywhere they can.

That’s why analysts make a big huff over the jobs numbers reported by the Bureau of Labor Statistics each month (even though it’s a lagging indicator), as there’s a delicate relationship between jobs numbers, interest rates, and future corporate earnings growth.

During economic contractions, however, the opposite is true. High unemployment numbers tend to move stocks down, while low unemployment moves stocks up.

So when the unemployment rate reached 14.7% in April 2020 and the stock market tumbled, at first glance it may have seemed like the economy was contracting. But if we consider the COVID crisis and the U.S. unemployment rate compared with the S&P 500 and Nasdaq, the highest unemployment numbers were actually accompanied by a steady rise in stock prices, indicating the U.S. economy was still expanding. 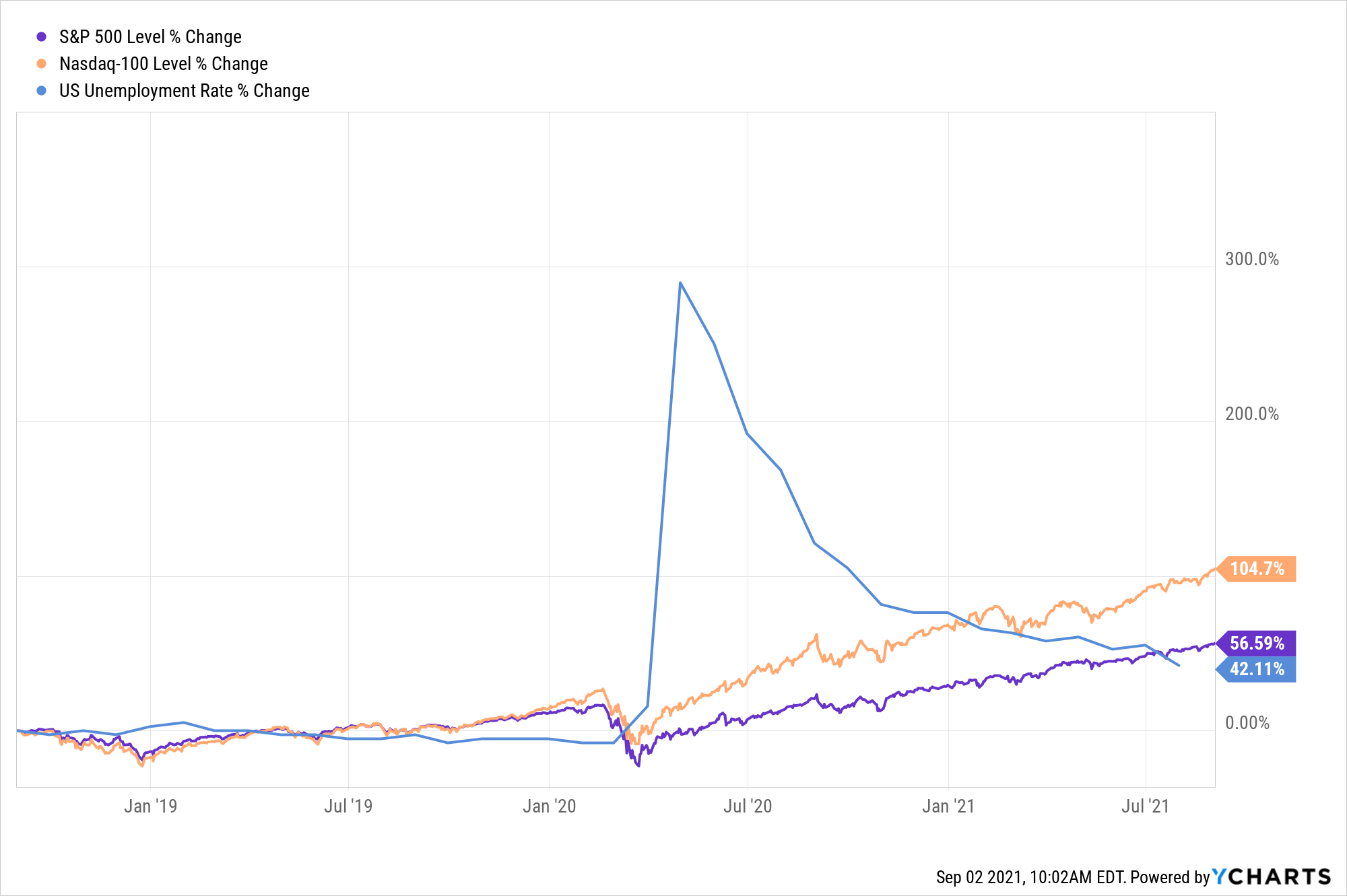 As unemployment falls and stocks continue to rise, we could interpret that as the economy nearing a contraction, but we should always take the jobs numbers with a grain of salt, especially as the Fed keeps the unemployment rate stable while setting interest rates.

And, of course, rising unemployment can prove detrimental to economic growth, which is why so many companies are scrambling to fill unwanted jobs and create new, higher-paying ones.

Welcome to the Future of Labor

COVID-19 no doubt created a vacuum for disruption in the jobs market.

And one little-known technology is at the forefront of solving the labor crisis while creating more jobs than our keepers in Washington ever could.

This tech is now being used in every sector of the economy, from healthcare, national defense, and transportation to agriculture, retail, and the service industry.

Technology and Opportunity investment director Keith Kohl has been following this trend for months, and he’s recommending three companies leading the charge with massive upside potential.

Just click here for all the details and start putting your money to work right now.