How "The System" Steals Your Wealth

Let me show you how "the system" steals your investment dollars from right under your nose.

In this case, "the system" is the tangled network of advisors, salesmen, fund managers, and their associated costs and hidden fees.

We're going to compare the performance of the broad market against my employer provided retirement fund (as opposed to the separate IRA I manage on my own).

Here's a straightforward year-to-date chart of the Dow and S&P 500:

If you bought an index fund that tracked their performance, like the SPDR Dow Jones Industrial Average (NYSE: DIA) or the SPDR S&P 500 (NYSE: SPY), you'd be up by the same percentage.

Not bad. But that's only if you buy the fund on your own.

Watch what happens when we look at the year-to-date performance of my American Funds retirement account: 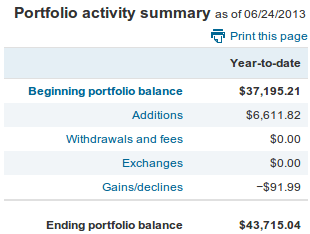 My year-to-date return is in the red, down 0.23%. You can see it plain as day in this image I grabbed from my portfolio value history:

Are you experiencing something similar? Despite the market reaching record highs, has your retirement account stagnated — or gone down?

Look at the expenses for the funds in my retirement account:

Over the course of an investment lifetime, retirement account and mutual fund fees like these will cost the average American $109,407.

Pay Them to Lose Money?

You see, instead of a straightforward fund that tracks an index with passive management, like the SPDR Dow Jones... financial companies with retirement programs have many more costs. They have to pay the salaries of fancy fund managers (the three funds in my account list around 10 managers apiece).

They have to pay administrative fees, like providing customer service, record keeping, and distributing statements, which they also pass on to you. Then they have marketing fees, like sponsoring stadiums and buying high-priced advertising spots that tell you how trustworthy they are. And you pick up the tab for those costs, too.

The real kicker, though, is that you pay that expense ratio on the full balance of your account year after year.

Take a hypothetical account with $50,000 earning an average 5% per year.

There are additional fees called sales charges that are not incorporated into the expense ratio.

Here's the simple definition from Investopedia:

A large number of mutual funds carry sales charges. The amount of a sales charge represents the difference between the purchase price per share paid by the investor and the net asset value per share of the mutual fund. By regulation, the maximum permitted sales charge is 8%, but most loads fall within a 3-6% range.

In short, that's what the guy who comes to your office (maybe) once a year gets on every single mutual fund purchase you make. My sales charge is 5.75%, and I make the selections and fax the execution directly to the main office, completely bypassing the guy who will still get 5.75% of my money.

How these fees are calculated and charged is so complex that even the Wall Street Journal admits:

There are other costs, not reported in the expense ratio, related to the buying and selling of securities in the portfolio, and those expenses can make a fund two or three times as costly as advertised.

One reason trading costs go unreported is their complexity, which leaves the fund companies in disagreement about exactly how to calculate those costs. Trying to quantify a fund's trading expenses can be about as easy as performing brain surgery.

Not exactly what you want to hear about the cost of your retirement...

And your government certainly isn't doing anything to change it.

But it cost you over $70,000 in fees to get it, giving the financial institution just as much as you earned.

That's the American retirement system in a nutshell: One for you, one for the bank.

And that's how it's been designed. The entire system is engineered to slowly siphon off the wealth of average Americans a few pennies at a time.

The banks bury it all in the fine print, and the politicians look the other way as long as the campaign contributions (hush money?) keep rolling in.

These are the ongoing shenanigans that keep an entire class of people financially pinned down and economically immobile.

There are, however, many steps you can take to lessen the impact has on you, your finances, and your way of life...

I'll be releasing the first Outsider Club special report next week to address these issues.

Keep an eye out for it.