No stock can be considered a "sure thing"- However, some Stocks and Companies do stand out above the competition. In addition to a quality company, various circumstances can lead to booms within certain sectors. Governments around the world are devaluing their currencies- creating the perfect storm for precious metals- especially gold.

Our analysts have thoroughly researched the top junior mining companies that have consistently dominated the competition. We've compiled a list for you to make it easier to pick and choose which Junior miner works for you best.

Generally speaking, junior gold miners are a risky proposition, but they offer incredible returns due to their leverage. We will go into more depth about each of these top junior mining companies so you can form your own opinions about which junior miner would fit best in your portfolio.

Despite being a junior miner, Midas Gold offers a great way to leverage gold prices without a lot of risk.

You see, Midas has locked into a very lucrative find known as the Golden Meadows project. It's actually a cluster of three gold deposits in a friendly mining jurisdiction in Idaho. All told, Golden Meadows harbors 6–7 million ounces of gold, grading 1.6 grams per tonne.

It's a great deposit in a great location. The district is located in the Central Idaho Porphyry (Gold) Belt with over 8 million ounces of past gold production. It was the largest gold, tungsten, and antimony producer in Idaho throughout its history and a major source of those metals from the 1920s through the 1950s.

Now, Midas is building a mine there. It'll take three to five years and some $880 million to complete. But once it's finished, the mine will produce 400,000 ounces of gold in its earliest stages.

Paulson & Co, the investment firm headed by famed billionaire investor John Paulson, recently injected C$55 million in financing into Midas. This is the same man who made $4 billion betting against the subprime mortgage market, if you recall.

Pershing is a $75 million company with one project: the Relief Canyon Mine in Northwest Nevada.

According to CEO Steve Alfers, that economic report will show production costs of between $600 and $800 per ounce. Alfers also says production will average 84,000 ounces per year over the mine's lifespan.

The only thing left to do is start production. That, the company says, will likely happen in the next few months.

Pershing has no debt and roughly $13 million of cash on hand, having recently completed an $11.5 million raise. There is a small possibility that the mine's opening could be delayed. There is also an equally small opporunity that a larger competitor will acquire it. 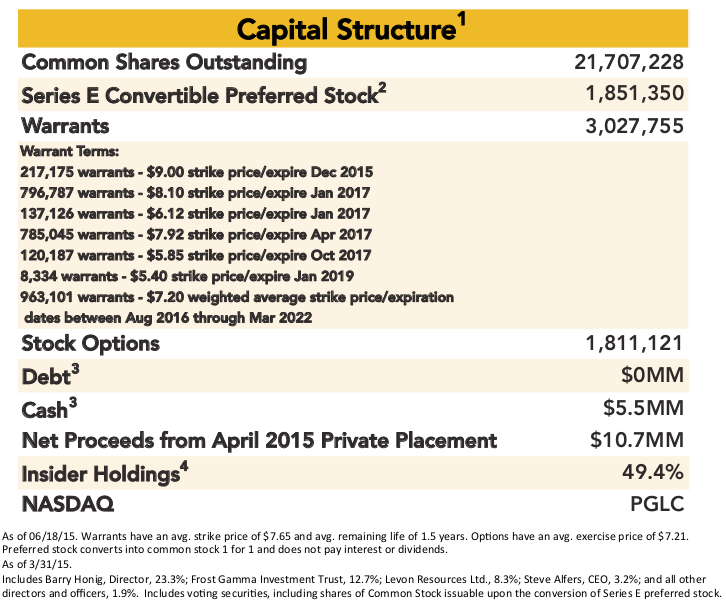 GoGold is in a position similar to Pershing, except it's already producing.

The company's flagship project is the Parral Tailings in Chihuahua, Mexico.

GoGold took control of the Parral Tailings Project in 2012 when it acquired Absolute Gold Holdings Inc., the site's original proprietor. The 141-hectare site hosts 21.3 million tonnes of tailings left over from 340 years of mining operations.

In addition to the Parral Tailings project, GoGold is working to bring another mine online in Sonora, Mexico.

This mine, the Santa Gertrudis, has an estimated resource of 810,000 ounces of gold indicated and a further 255,000 ounces inferred.

Projected life-of-mine average cash operating costs are $622 per ounce of recovered gold, while the total all-in cost of production is estimated at $699 per ounce of gold.

Indeed, the Parral project is already making money for GoGold, and Santa Gertrudis isn't far behind.

An early-stage gold/copper explorer/developer, Pilot Gold was crushed by the bear market in gold. However, the company is debt-free and poised to perform quite well as the gold market rebounds more robustly.

In fact, it's already experienced a significant bounce these past six months.

The company has established a reputation for "finding the sweet spot," with three major projects currently underway: Kinsley (Utah), Goldstrike (Nevada), and TV Tower (Turkey). The risk level in all three locations is considered low, with high potential for some plentiful and lucrative deposits.

A technical report filed in November 2015 showed the project had initial capital costs of $370 million, and the key all-in sustaining costs of $585 per ounce.

Construction is scheduled to begin on the site this year. Once it's complete, production is expected to average 200,000 gold ounces per year over a decade.

The total recoverable amount of gold is estimated at 2.1 million ounces, with accelerated after-tax cash flows of $567 million during the first five years of operations to support early payback of project debt and equipment financing.

B2Gold is a Vancouver-based gold producer with three operating mines (two in Nicaragua and one in the Philippines) and a strong portfolio of development and exploration assets in Namibia, Nicaragua, Mali, Burkina Faso, and Colombia.

This is largely due to higher productivity and cost efficiency at the Otjikoto Mine, where a weaker Namibian dollar and lower fuel and energy costs have provided a nice tailwind. In all, the Otjikoto gold project has excellent exploration potential. 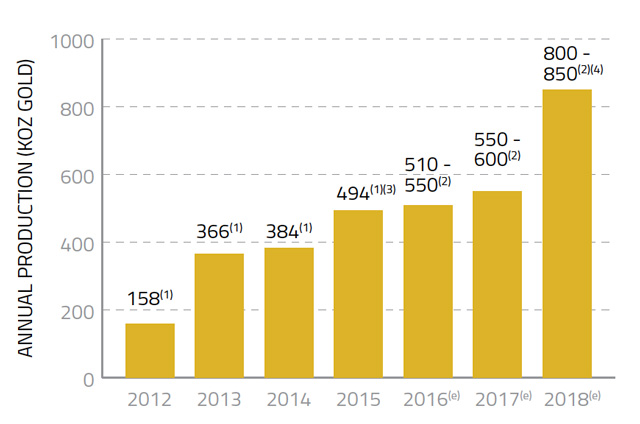 The bottom line is this: We're entering a period where gold demand is increasing, but it's also much harder to find thanks to lower production targets and declining asset quality.

Companies that have a greater chance of making a discovery will fetch higher prices. So, too, will quality deposits with robust economics.

If you can weed out the 99% of companies that will never mine or sell anything, then you've got a good shot at harnessing the most explosive upside this segment has to offer.

Companies like Midas, Pershing, GoGold, Pilot, B2Gold, and Lydian will play a pivotal role in this emerging opportunity.

Most recently, our resident gold expert Gerardo Del Real has released his latest research on a exciting new trading strategy that gets you in and out of mining stocks every 30-60 days. Learn more about that strategy here.

The Most Lucrative Gold Investments Available

This is how you get the best deals in the gold mining space.
Heal Your Ailing Portfolio Body