The days of coin and paper money?

They’re coming to an end faster than you realize.

Some would say those days are already over.

This is the 21st century now and most transactions are digital — either through debit cards, online purchases, or automatic electronic payments.

So it only makes sense that our currency is digital, too.

Hence the rise of cryptocurrency.

I’m talking about Bitcoin, Ethereum, and others.

This next generation of currency is faster, safer, and more convenient. They’re decentralized, which means they’re not subject to the whim or credit of a government. They’re independent of central banks. They can’t be traced or devalued.

In sum, they can achieve everything normal paper dollars can and more.

They can be broken up and sold off in pieces. They can be transferred digitally from one person to another with no third party.

That’s why they’ve been successful.

In less than a decade, Bitcoin has evolved from an almost-worthless curiosity to a widely accepted currency that’s now worth thousands of dollars.

And that’s just the start.

The market is rapidly expanding and more cryptocurrencies are coming.

So here’s a look at what’s out there now and how investors can take part in the cryptocurrency revolution.

Bitcoin is the original cryptocurrency.

It launched in 2008 during a generational world financial crisis.

As I said, Bitcoin is convenient, anonymous, open-sourced, and completely independent from government or bank oversight. This made it crucial at a time when banks and debt-heavy governments were exposed as fraudulent, unstable, and unreliable.

Bitcoin miners run special software that competes with other users to solve irreversible cryptographic puzzles. The first miner to solve each puzzle is awarded 12.5 newly minted bitcoins. The difficulty of each puzzle increases as the number of miners increases.

The amount of Bitcoins a successful miner receives is cut in half every four years. It began at 50 bitcoins, and was last cut to 6.25 in June 2021. This will continue all the way through 2140, when the system reaches its absolute limit of 21 million bitcoins. More than half of the finite amount is already in circulation. 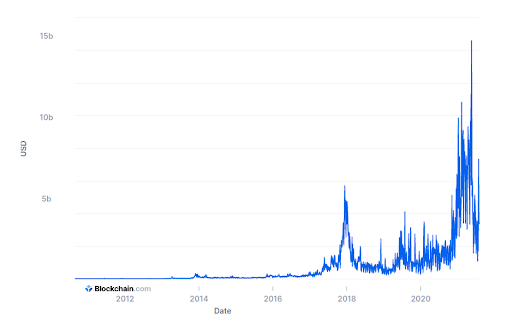 Once bitcoins are mined, transactions involving the currency are logged in a massive online ledger. This is made possible by so-called “blockchain” technology.

Blockchain is a series of linked blocks or lists. Each block contains a record of time-stamped transactions — who paid whom, how much, and when. These blocks are all mirrored publicly across an open network so anyone can see them.

This new data system allows for transparency, since blockchains store transactions and data without any central authority or repository. Ledgers can be compared by everyone using the system to avoid any illicit modifications or entries.

Through 2009 and early 2010, bitcoins had no actual value. The project was still in its infancy and there were no transactions taking place.

After a nosedive from almost $60,000 in May, the price of a single bitcoin is slowly rising again and is currently worth almost $40,000.

And with its finite supply, mainstream acceptance, and surging popularity, it’s all but sure to go even higher.

There’s even a website where you are able to buy and sell real estate with Bitcoin and other cryptos.

Is there anything standing in its way?

With its technological innovation and subsequent success, Bitcoin blazed a trail that new competitors are following.

You see, despite its advantages, Bitcoin has some flaws.

Furthermore, developers can’t build apps on Bitcoin. The system’s primary role is to safely transfer value — not to create software or add functions. This is intentional. Bitcoin was deliberately constrained to make it more secure.

Ether, which runs on a broader system called Ethereum, is more flexible.

In addition to creating and housing the cryptocurrency Ether, Ethereum also offers a way to create online markets and programmable transactions known as “smart contracts.”

Smart contracts function like software programs that use business logic. Meaning they have rules about money transfers, stocks, interest payments, debt, and more. Ethereum also has a built-in programming language that lets anyone build apps.

There are over 3,000 decentralized apps, or “dapps,” built on Ethereum, and hundreds more are being developed.

There are multiple apps that can enable peer-to-peer sharing.

There are even games and virtual worlds for which Ethereum is serving as the foundation.

Boeing, IBM, Microsoft, Oracle, PayPal, Samsung, Saudi Aramco, Visa, and Walmart are some of the top 50 global giants that apply corporate blockchain with an income or capitalization that exceeds $1 billion annually.

In fact, JPMorgan, UBS, and Mastercard invested $65 million into ConsenSys, a development studio on the Ethereum blockchain.

ConsenSys is crucial to NFT applications, which are usually on Ethereum blockchains.

NFTs rose to popularity in early 2021. Without ether, NFTs would not be as accessible, authentic, or secure as they are.

Ethereum could accommodate a vast array of financial derivatives.

Tech companies are pushing forward with their own Ethereum initiatives, too. Microsoft has been working on several projects that use Ethereum on its Azure computing cloud.

“Ethereum is a general platform where you can solve problems in many industries using a fairly elegant solution — the most elegant solution we have seen to date,” Marley Gray, a director of business development and strategy at Microsoft, told The New York Times.

The improvements Ethereum has made over Bitcoin have already led to a huge trend reversal that many are calling “The Flippening” — a tidal shift from Bitcoin to Ethereum.

Bitcoin now accounts for 41% of the cryptocurrency market cap. And Ethereum now makes up 34% of the total market cap.

Since it started closing the gap, the big question has been: Will Ethereum overtake Bitcoin?

Bitcoin and Ethereum are by far the biggest and most established cryptocurrencies out there.

But there are other upstarts looking to win their share of the market. These are known as “alternative cryptocurrencies.”

Capitalizing on the advantages of a government-proof and bank-proof currency means you need to take full responsibility for some of the work and security that governments and banks provide for traditional currencies.

First, you have to set up a digital wallet. This wallet is a collection of password-protected data that includes a public and a private key.

There are basically three types of exchanges:

Of course, going through a website exchange will require entering your bank account information, or your credit or debit card details. So you’ll want to make sure it’s reputable.

But that’s really all there is to it.

Buying and selling cryptocurrencies is just like buying or selling anything else.

The sooner you learn to do it the better off you’ll be. Cryptocurrencies are the future. And if you get in early as an investor, they can deliver huge rewards.