The cannabis market is growing as fast as internet companies were in the 2000s, and it’s set to deliver outsized returns for years to come.

For better or worse, marijuana is immensely popular, and its popularity is increasing each and every day...

The CDC reported 22.2 million users in the U.S. each month; 12% of Americans identify as active marijuana users.

The trend is clearly growing in favor of marijuana growers and distributors. You can choose to turn up your nose, or you can start cashing in on the feeding frenzy while it's still on the way up. In other words, the time has finally come for marijuana stocks.

The North American cannabis market posted a record $17.5 billion in revenue in 2020, up a full 46% from 2019, according to a recent report from Forbes.

The legal cannabis market in the U.S. alone is expected to skyrocket in the next decade — growing up to $75 billion, according to Cowen Inc.

Legal marijuana is here to stay, and marijuana investing will be the greatest moneymaking opportunity of our lives. You really don’t want to miss out on this megatrend that can deliver life-changing gains.

As an investor, you should know that while states have been free to pass legalized marijuana laws, federal laws still recognize marijuana as a Schedule I controlled substance — which is still technically illegal. This means the feds can go after legal cannabis companies if they so desire.

Although marijuana is still illegal under federal law, I would not fear for your investments due to federal prosecution. There are numerous reasons why it doesn’t make sense for the feds to prosecute business owners, the first being it would severely impact tax revenue from states with legal medical and recreational cannabis.

While former attorney general Jeff Sessions may have talked a big game about cracking down on cannabis businesses, we believe that’s exactly what it was — just talk.

Current attorney general Merrick B. Garland seems a bit more laid back when it comes to cannabis consumption but has not voiced support for full-scale federal legalization outright.

Senate Majority Leader Chuck Schumer calls cannabis legislation “one of the high priorities” for Democrats after unveiling a draft legislation that would legalize marijuana. The legislation also allows states to decide whether or not to legalize cannabis.

One key takeaway from all the fear surrounding a federal crackdown on marijuana is it provides a massive buying opportunity.

The image below shows that American support for marijuana legalization has reached 68% — an all-time high. 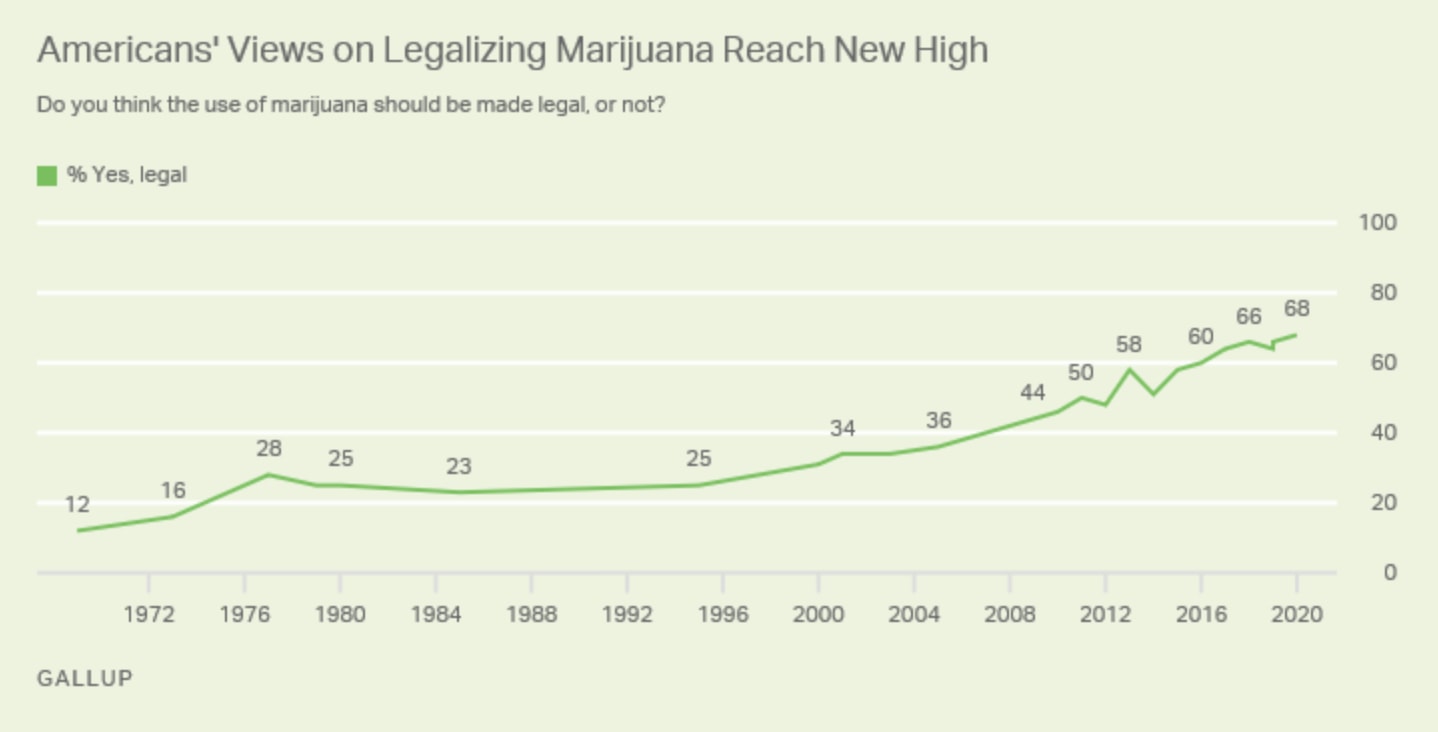 There certainly isn’t a better time to be a marijuana investor.

If you are unable to look past the lingering threat of the teeter-totter of federal marijuana laws, we also have a variety of cannabis stocks that trade on Canadian markets that are just as (if not more) lucrative. When it comes to federal regulations on marijuana, Canada is a little ahead of the United States, which makes investing in Canadian cannabis companies a wise decision from an investment standpoint.

The following are proven marijuana stocks that have treated investors to substantial gains:

The future of the marijuana industry is extremely promising. There are so many opportunities that sometimes it can feel overwhelming. Luckily, Jimmy does the legwork for you and finds the best stocks to help narrow your search.

Be on the lookout for his latest recommendation to his Crow’s Nest readers.