The bill sent direct payments of up to $1,400 to most Americans, extended a $300-per-week unemployment insurance boost through the fall, greatly expanded the child tax credit, and gave some $350 billion in aid to state and local governments.

So was it a good idea? And what does it mean for investors?

The first question is a contentious one, depending on which economist you ask. The second question, however, is very straightforward. The answer is buy gold.

You see, the view of most economists is that yes, stimulus packages like the ARPA are a good idea. You’ve probably heard the explanation before as to why.

More than two-thirds of America’s GDP is made up of consumer spending. Paying the average Joe takes advantage of a multiplier effect in which multiple people are enriched by each transaction Joe makes, thus creating more wealth than the cost of the stimulus checks.

This multiplier increases aggregate demand relative to aggregate supply and thus GDP. It can therefore mitigate the damage from mass unemployment events like the current pandemic. 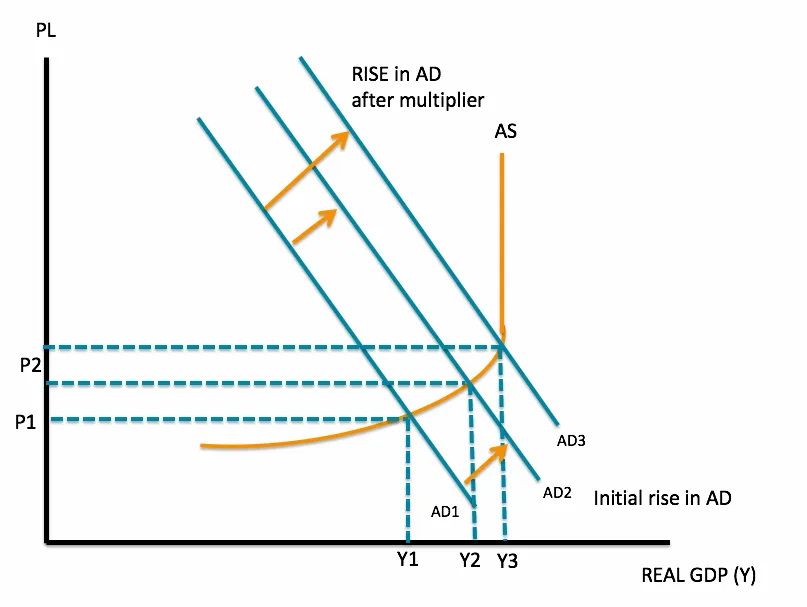 There’s a lot of historical evidence to support this perspective, which is sometimes called Keynesian economics (after John Maynard Keynes, a notable early 20th-century economist who advocated for government economic intervention during downturns).

But there are also a lot of respected economists who disagree with the Keynesians, because they think big, sweeping relief payments — like the type Biden just signed — only serve to delay or redirect economic hardship.

Austrians note that there’s a dark side to the multiplier effect utilized by stimulus measures like the ARPA: inflation. When governments increase money supplies through large stimuli, they devalue their currencies, eventually leading to higher prices in the future.

Followers of Hayek and Mises believe that this “planned inflation” is an immoral tax on wealth and delegitimizes a country’s currency. They believe that a currency’s supply and value should be tied to a finite resource like gold, as it was before the mid-20th century.

And they urge investors to hold some or all of their wealth in gold to save themselves from the effects of dollar devaluation.

So are the Austrians right? Or are the Keynesians?

Economists have been arguing over that question for more than a century, and it’s not The Outsider Club’s place to answer it. But whether or not you agree with them, the Austrian’s views have certainly been influential and have driven gold prices in recent decades.

In the graph below, you can see that the price of gold (orange line) tends to spike during periods when the U.S. dollar index (blue line) is down. Gold did great in the aftermath of the 2009 American Recovery and Reinvestment Act (also known as the Obama stimulus package), when the price of the U.S. dollar took a beating amid a nearly $1 trillion supply increase. 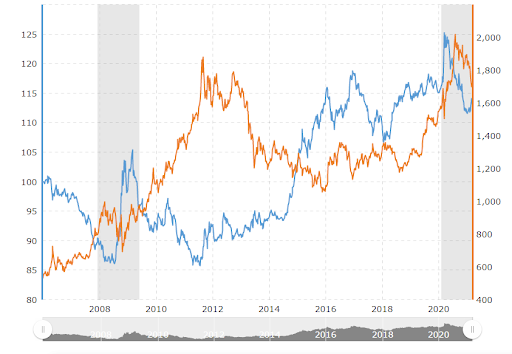 More recently, the U.S. government has been dumping far larger sums of money into the U.S. dollar market as part of its COVID-19 relief efforts, and thus turbocharging gold stocks in the process.

On March 27, 2020, President Trump signed the Coronavirus Aid, Relief, and Economic Security Act (CARES Act), injecting $2.2 trillion into the economy through a combination of $1,200 direct payments to most Americans, increased unemployment benefits, and massive aid to companies and state and local governments.

Today, we’re dumping another potentially dollar-devaluing $2 trillion into the economy, and there’s a similar (if not greater) chance to profit from gold stocks in the aftermath.

But not all gold stocks are created equal for this kind of play. As you can see above, junior gold miners significantly outperformed during the aftermath of the last stimulus, and there’s a reason for that…

Junior gold miners are small gold exploration companies that often trade as penny stocks. These companies are typically involved in searching for new gold deposits and financing new mining operations when found (typically using capital which the companies have borrowed).

As a result of this business model, junior gold mining stocks are essentially highly leveraged bets on the price of gold. If a junior miner finds a gold deposit during a period of rising prices, its value can soar. But if it fails to find anything, or the price of gold tanks, then it can quickly be overwhelmed by its debts and end up declaring bankruptcy.

As we’ve discussed, gold appears to be entering an extremely strong bull market at the moment, so the second concern isn’t especially pressing. But investors who want even greater returns than the GDXJ profits shown in the graph above must learn the difference between a junior miner that is going to strike it rich and one that is going to come up empty.

After all, less than 5% of mining projects actually get developed into producing mines.

Some never get drilled, some turn up dry holes, some run into regulatory hurdles, and some have issues with territorial claims... 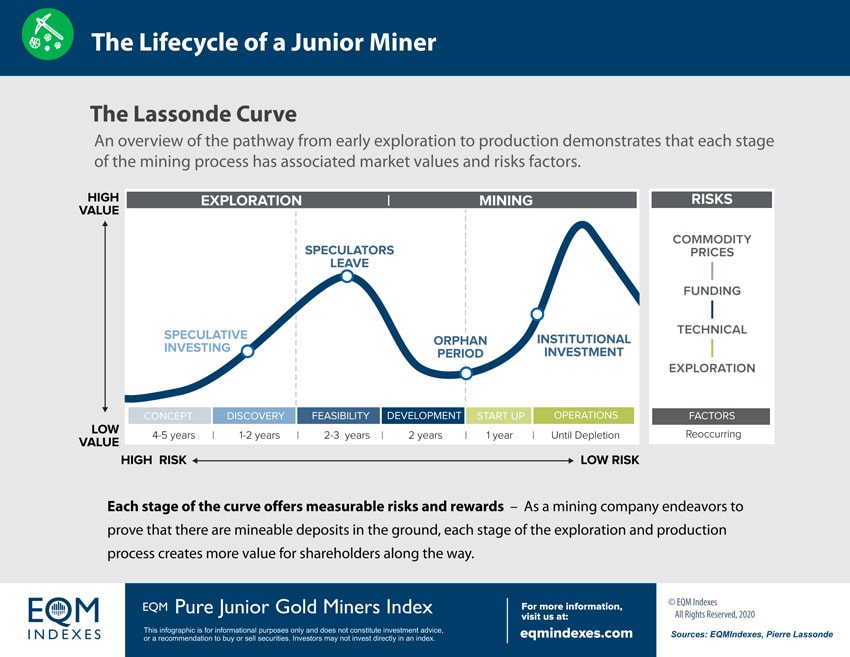 When junior miner companies do strike gold, they strike it big with stock valuations that shoot up by factors of 10.

Now, because investing in junior miners has a tendency to be profitable but perilous, we've compiled this report that outlines the three best junior miner stocks on the market today. If you're looking to invest in the high-risk, high-reward junior mining space, this is the place to start.

B2Gold Corp. is a Vancouver-based gold producer with three operating mines (one in Namibia, one in Mali, and one in the Philippines) and a strong portfolio of development and exploration assets in Namibia, Mali, Burkina Faso, Finland, Uzbekistan, and Colombia.

Strong revenue and profit figures will come hand-in-hand as the company meets these expectations. The company also pays an annual dividend of $0.16 per share — an unusual perk among junior miners that should help shareholders compound their gains.

B2Gold is in the midst of a production boom and should perform strongly in the coming years. With its relatively low all-in sustaining costs and fully developed mines, it will handsomely profit from gold even if prices pull back.

Streaming firms are an unconventional type of mining interest that act like a venture capital firm, providing upfront cash to miners in exchange for royalties that grant them the right to buy discounted gold in the future.

Streamers like Sandstorm can thus diversify their exposure across many small speculative projects, giving shareholders many of the exposure benefits from junior mining with less risk.

Sandstorm has royalties in 11 producing precious metal mines across Africa and the Americas. It is especially concentrated in the Hod Maden copper-gold development project in Turkey, which is expected to become one of the most profitable mines in the world when it comes online next year. 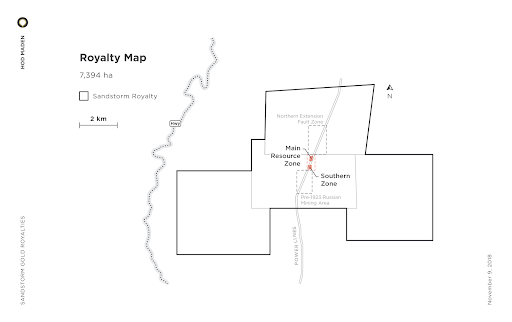 Hod Maden alone is expected to double Sandstorm’s cash flows in 2022, and that’s just the cherry on top of a steady growth trajectory Sandstorm has charted for the next few years.

The firm had royalties on 52,200 ounces of newly-mined gold in 2020 and expects that quantity to increase to as much as 62,000 ounces this year. It also sees total revenue rising from $93 million to $100 million, and operating cash flow rising from $66 million to $75 million. This follows a decade of steady increases in royalty production and revenue… 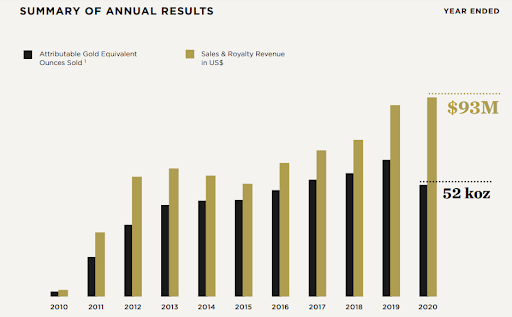 Sandstorm is profitable on an earnings basis, has a better return on equity than most of its peers, and, perhaps most excitingly, is completely debt free.

Bagassi South, the company’s first growth project, achieved commercial production in September 2019. Roxgold’s feasibility study on the mine outlines an after-tax internal rate of return (IRR) of 53.2% with a 1.8-year payback on initial capital, based on a gold price of $1,300 per ounce.

The company also has acquired 11 exploration permits in the Ivory Coast from Newcrest for up to $30 million. The Seguela gold project has the highest potential and Newcrest has already invested $20 million for exploration 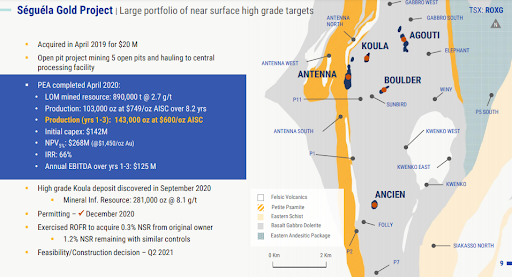 The Antenna deposit in Seguela already contains inferred resources of 430,000 ounces of gold within 5.8 million tonnes, grading 2.23 grams of gold per tonne.

While it is exploring the potential of these new mines, it is also performing extremely well at producing gold.

At the same time, its operating costs are steadily shrinking while its revenue is rising, freeing up even more cash flow for its new exploration projects. 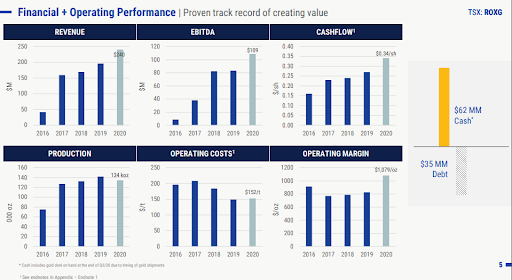 Roxgold has a strong 10.66% return on equity, a low debt-to-equity ratio of 24%, and operating cash flow of $69 million — plenty to keep drilling and a lot of wiggle room for any fluctuations.

The three junior miners we’ve profiled here are in unique positions of stability relative to their peers. They each have viable projects that are producing consistent or marginally increasing quantities of gold in a time when the coronavirus, the ARPA, and other economic factors are pushing gold prices strongly upward.

This should allow B2Gold, Sandstorm, and Roxgold — along with shareholders like you — to earn fairly consistent gains, whatever the dollar or the U.S. economy does next.

But there are even bigger gains to be had in the junior gold mining industry. More speculative miners, with projects that are not online yet, give investors the opportunity for far higher returns than the relatively safe juniors we’ve outlined here.

The problem, of course, is that they’re riskier, and they require more of an expert eye to evaluate. If you’re looking for help separating the wheat from the chaff in the more speculative and high-returning parts of the junior mining space, check out Junior Mining Trader.