Silver prices had a very strong 2016, climbing more than 25%. That far outpaced gold, which rose just over 9%.

And that’s really silver’s allure. It’s more volatile than gold, which can be interpreted as a negative characteristic in bear markets. But in bull markets, that’s a positive attribute, as it multiplies gold’s price gains.

So, going into 2017, the market for both metals is indeed bullish, but the outlook for silver is brighter than that of its illustrious counterpart.

Most analysts believe silver prices will average something close to $18 per ounce this  year.

Both price points would be an improvement over silver’s current level, but they’re also underestimating the metal’s true potential. I’m more inclined to agree with ETF Securities’ analysis, which pits silver prices in between $22 and $24 an ounce in 2017.

Indeed, I believe the 2017 silver outlook is decidedly bullish for three reasons:

These three factors will carry silver above $20 per ounce. And if they fail to accomplish that this year, then they’ll certainly do it in 2018.

In fact, by 2019, silver prices could be as high as $35 per ounce, or roughly double the current price.

According to the  Silver Institute’s 2016 World Silver Survey, there’s been a physical silver supply deficit for the past three years. 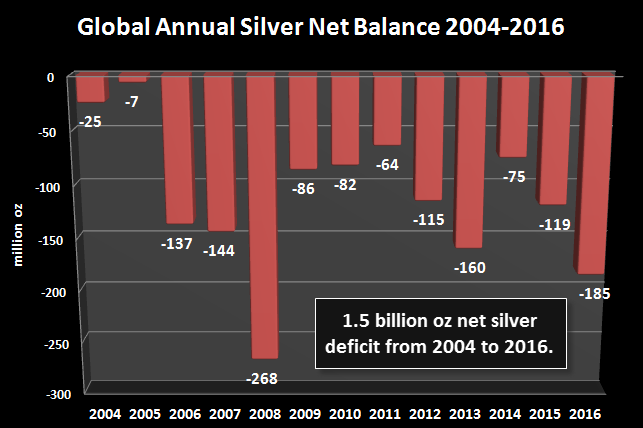 Silver ETFs and exchanges added 133.3 million ounces of silver to their inventories through the third quarter of 2016, as investors drove demand.

That mirrored a similar rush into gold, which saw global investment demand rise at its fastest pace on record in the first half of 2016, climbing 141% in the second quarter, alone.

Unlike gold, however, silver also generates widespread demand from industry.

Industrial fabrication makes up about 50% of silver demand each year. That’s compared to less than 10% for gold.

The fast-growing solar industry, in particular, has been a major bright spot in that respect.

That's 16 gigawatts in total, which means the U.S. solar didn’t just top 2015's record 7.3 gigawatts of total new photovoltaic capacity — it doubled it. And U.S. photovoltaic installation could triple by 2020.

All told, global solar installations totaled approximately 65 GW in 2016. And that figure is projected to keep rising from there.

Thomson Reuters GFMS estimates an 11% rise in silver demand from solar sources in 2016. And HSBC predicts there will be another 10% increase in 2017. 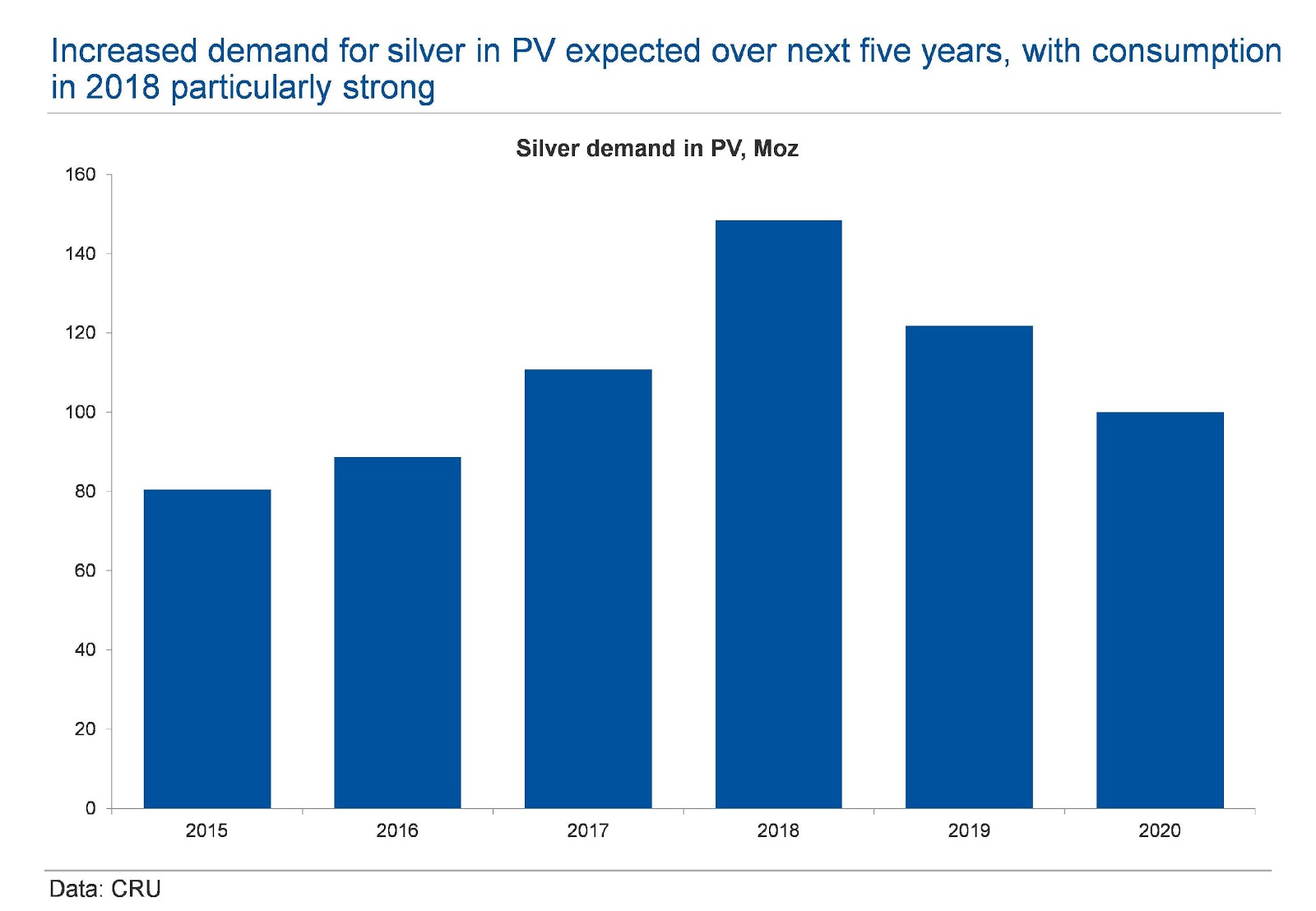 Yet, with all this demand, silver mine production is on the decline — hence the massive deficits we see accruing.

Silver production peaked at 893 million ounces in 2015. But in 2016, it fell to 887 million ounces. And it’s poised to keep falling in the years, and even decades, ahead. 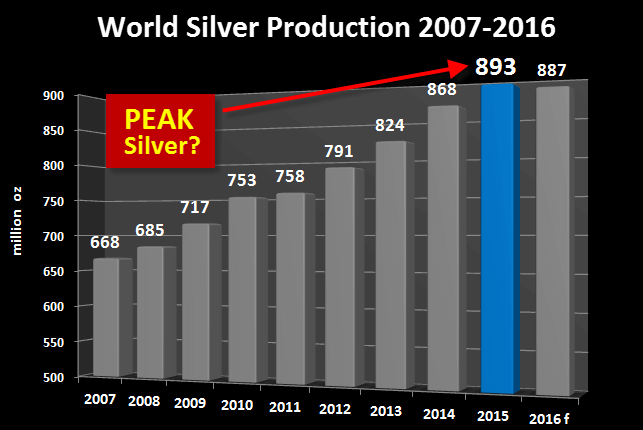 There simply aren’t enough new silver projects coming online to compensate for the ones running dry. What money has been poured into exploration has turned up weak results. And copper, zinc, and lead mining, which often yield silver as a by-product, are on the decline as well.

Taken with the increased demand from investors and industry, and you’ve got a real problem.

Those elements, alone, should be enough to drive silver prices higher.

But then there are other, political factors, too...

The value of precious metals is inextricably linked to currency valuations. The two are intertwined and inseparable.

As a result, inflation is the force that often drives gold and silver prices — at times even more-so than supply and demand.

Now, after years of post-financial-crisis stimulus, inflationary pressures began falling in 2013. So, it made sense for investors to flee the silver market during that time.

But that’s no longer the case.

This inflationary trend reversed in early 2016.

The annual rate of inflation has actually doubled since the Fed first started raising interest rates in December 2015. It’s currently at a level not seen since 2011. 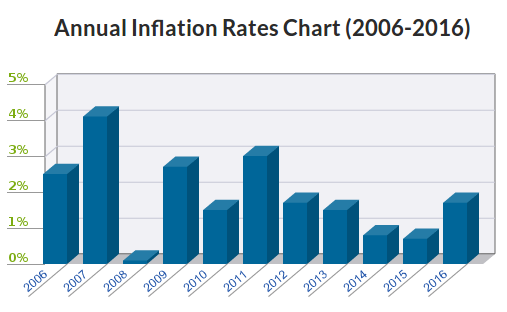 While that’s a natural assumption, the opposite is what’s actually occurring.

Inflation is much closer to its pre-crisis and post-stimulus levels (2%) than the sub-1% dregs that engulfed precious metals in 2014 and 2015.

In early 2016, the Fed’s own five-year forward inflation expectation was around 1.4%. Today, it’s over 2%. That’s a significant leap, especially in a window of just one year.

Again, this is counter-intuitive, but not unprecedented. In fact, it’s common.

There have been five major increases in the Federal Funds rate since the 1970s, and every one of them presaged a weakening, not a strengthening, of the dollar.

Just look at the last two monetary tightening periods — in February 1994 and June 2004.

Furthermore, the “tightening” we have seen in monetary policy has been slow to evolve. It is hopelessly outpaced by the rapid expansion in fiscal policy.

Entitlement spending on Social Security, Medicare, and Medicaid shoulders the bulk of that burden.

But that’s not all.

President Trump and the Republican controlled Congress are already planning a round of budget-breaking tax cuts that would increase the national debt by $5.3 trillion. 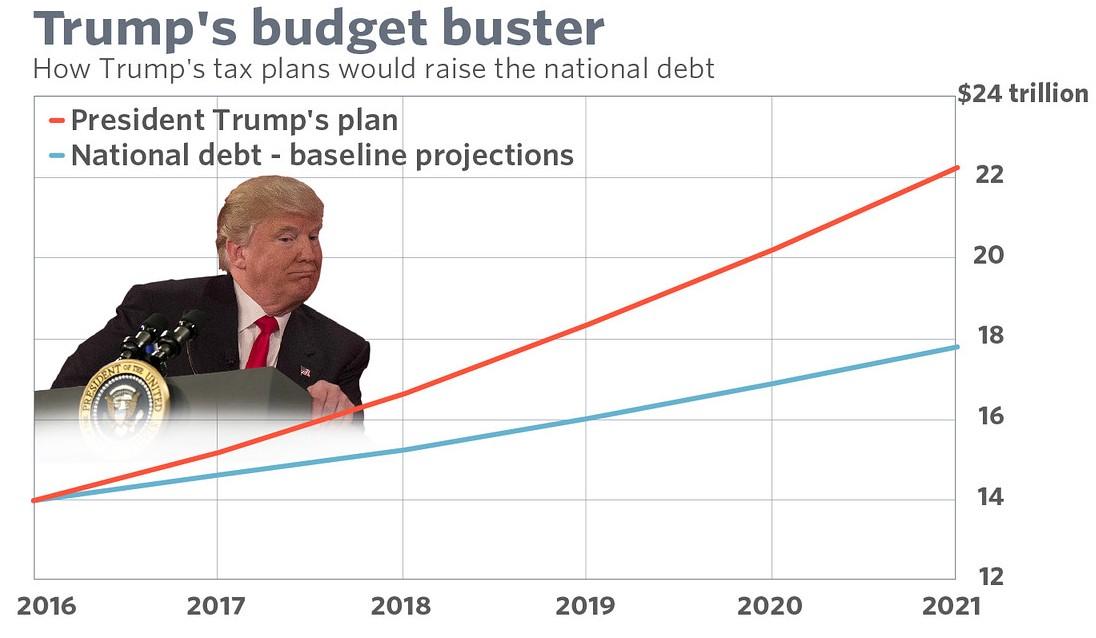 Of course, now that quantitative easing is considered an essential tool of the Federal Reserve, it’s likely that a sizable portion of this debt will be monetized by the Fed when the next recession hits.

And that brings us to our third and final point.

We were told the Brexit wouldn’t happen. It did.

We were told Donald Trump wouldn’t be president. He is.

China has grown increasingly aggressive in the South China Sea. Russia invaded Ukraine. The Middle East is somehow an even bigger quagmire than it was 10, 20, or even 30 years ago.

Europe has been torn asunder, with upcoming “FrExit” and an “ItaLeave” referendums that jeopardize the European Union, the euro, and the greater global economy.

Elsewhere, central banks from Europe to the Pacific have indulged in a currency war to manufacture “growth,” even deploying negative interest rates in some cases.

The threat of a major political crisis or crises embroiling 2017 is unfortunately, and terrifyingly, real.

And what performs well in these situations?

When everything goes wrong gold and silver rise. They always do. They did in 2008 and they will again.

The world is not a safe place right now. Nor are traditional financial markets.

Even just the whiff of uncertainty will be enough to send silver soaring at a time when supply and demand dynamics suggest the metal should already be trading higher.

Investors would do well to buy into silver at its current price (around $16 per ounce) for both the long and short-term.

The iShares Silver Trust (NYSE: SLV) or physical silver through the purchase of bullion or silver American eagles.