Special Report: The 6 Lithium Stocks Every Investor Should Know

Goldman Sachs is calling it “the new gasoline.”

The Economist has called it “the world's hottest commodity.”

Energy experts have dubbed it the "oil" of the future.

I'm talking about lithium: a one-of-a-kind element used in consumer electronics, computers, and communication — think everything from cellphones all the way up to electric vehicles... basically anything necessitating a compact, rechargeable power source.

Right now, lithium prices are heading back up after a pullback from an extremely aggressive increase in price. 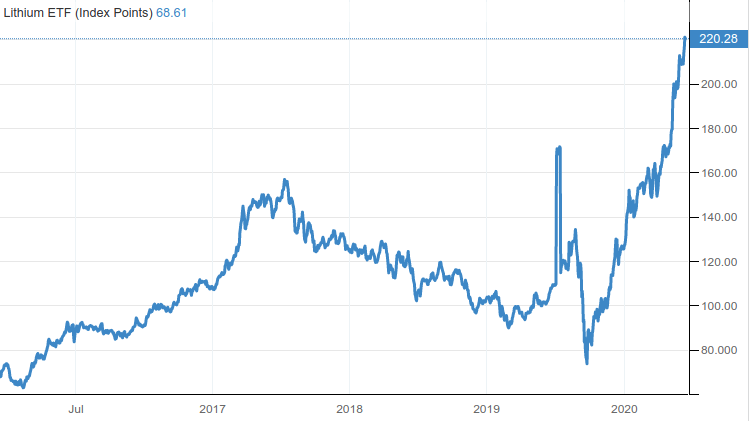 Demand is going to soar in the coming years. The main driver for this explosive lithium growth is the rechargeable battery sector.

Rising prices of lithium, cobalt, and carbon are not a bubble. They are underpinned both by rapid growth in electric vehicle sales and tight supplies.

Electric vehicles (EVs) are expected to make up 35% of the automotive market by 2040. Just as importantly, long-range electric cars will cost less than $30,000 by 2023, as promised by Elon Musk.

Again, this all goes back to batteries, which have seen a huge reduction in cost that will continue.

Estimates seem to cut fueling electric vehicles in half compared with conventional gasoline vehicles. The cost to fuel an EV is around $1.25 per kilowatt-hour, while a gallon of gas is averaged at $2.64.

The average cost of EV maintenance is roughly $460 annually, whereas gasoline-powered vehicles cost over $1,100.

In addition to being cheaper, these batteries are also more efficient. New and second-generation plug-in models can go farther on a single charge than their predecessors. And this is key.

The Tesla Model S has a 400-mile range. Audi's Q4 e-tron is up near 300 miles of range and is already considered the cheapest electric Audi, starting at around $45,000.

These technological advancements have accelerated sales. Furthermore, they’ve demonstrated a significant competitive advantage for car companies. It’s a race to build the best battery. The manufacturer with the most efficient — the most cost-effective and potent — battery wins.

Furthermore, such batteries are essential for renewable energy sources, specifically wind and solar. The need to store power for prolonged periods requires the kind of industrial-grade capacity that only advanced lithium batteries can deliver. That's added another nice tailwind to lithium demand.

Data compiled by Allied Market Research suggests that the global lithium-ion battery market is expected to grow at a compound annual growth rate of 18% to reach $129.3 billion by 2027. 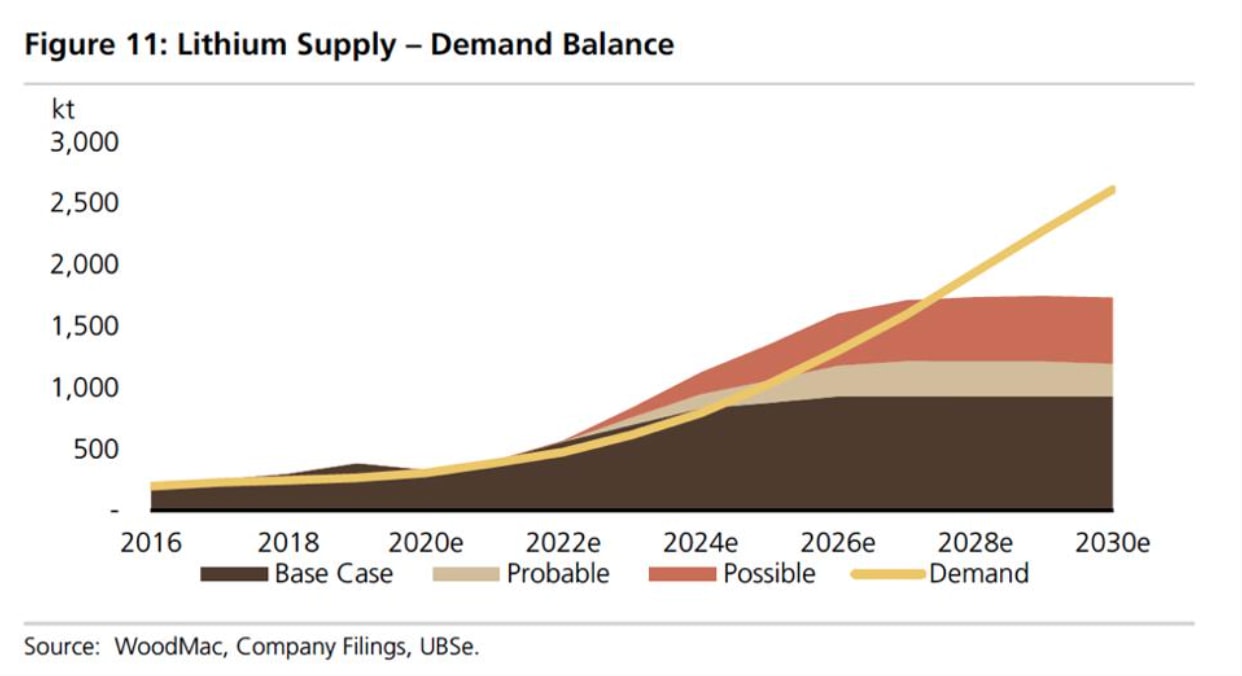 So how can investors play it?

Just four companies produce most of the global lithium supply:

Talison operates the Greenbushes hard rock (spodumene) mine in Western Australia, from which it exports over 350,000 tonnes of lithium products annually. It also owns a prospective project in Chile that consists of eight salars (brine lakes). Talison is a private company. It is 49% owned by Rockwood, which was purchased by Albemarle in 2014 for $6.2 billion.

Albemarle (Rockwood), in addition to its 49% stake in Talison, owns and operates a mine at the Salar de Atacama project in Chile and the Silver Peak mine in Clayton Valley, Nevada. Albemarle is a $14.33 billion market cap diversified chemical corporation and is not a pure play on lithium production, though it is positioning itself as the face of the lithium mining industry.

SQM also operates in the Salar de Atacama, with a project adjacent to Albemarle's. It has run into political and legal problems in both Chile and the U.S., and the life of its mine could be reaching an end in the next five years. It is a diversified mining and chemical company and not a pure play on lithium.

FMC operates the Salar de Hombre Muerto brine mine in Argentina, which has had substantial technical problems expanding production. FMC is also a diversified chemical company and not a pure play on lithium.

These stocks have done rather well over the years. Albemarle is outperforming the S&P 500, SQM rose 19% in just three months, and FMC stock is forecast to grow 12.96% per year.

Share prices notoriously pulled back in 2018 due to oversupply concerns raised by Morgan Stanley analysts that were eventually revealed to be unfounded.

Many Australian miners are benefiting as well, because electric car demand in China is absolutely booming. Australia is the world's top lithium producer and home to the world's two biggest lithium mines.

Galaxy Resources (ASX: GXY) doubled its share price rise from AU$1 to reach as high as AU$2.16 and then level out around AU$2. Galaxy Resources currently has a market capitalization of $953.9 million.

Pilbara Minerals (ASX: PLS) developed the Pilgangoora project in the iron ore-rich Pilbara region of Western Australia. The lithium-tantalum project is 100% owned by Pilbara and is one of the largest hard-rock lithium deposits in the world.

The Pilgangoora project is currently in Stage 2 of a three-stage expansion process for the mine. Company reports have stated that it is waiting until “such time that market demand and/or participation of a partner at Pilgangoora is sufficient to justify its development.”

You can stay up to date with Pilgangoora project developments right here.

As lithium demand increases over the years, Pilbara’s stock price should follow suit.

The fund is a great way to track the overall lithium market while investment and demand grow over the next few years into unparalleled territory in the coming decades.

Included in the holdings of the ETF are miners, chemical companies, battery manufacturers, and other industrial companies.

By diversifying the exposure to lithium, the Global X Lithium & Battery Tech ETF provides investors with less risk and the potential for long-term reward.

Outsider Club, Copyright © 2021, Outsider Club LLC and Angel Publishing LLC. All rights reserved. 3 E Read Street, Baltimore, MD 21202. Your privacy is important to us – we will never rent or sell your e-mail or personal information. Please read our Privacy Policy. Neither the publisher nor the editors are registered investment advisors. Subscribers should not view this publication as offering personalized legal or investment advice. Read our Details and Disclosures.