That’s right, the happiest place on Earth is moving toward a more hands-off experience, from entry to rides, throughout the Orlando theme park.

When you go into the park, an image of your face will be captured, converted into a unique number, and then applied to your park admission.

Disney World will store images captured throughout the testing phase for only 30 days, so don’t worry too much about the identities of the park-goers.

We get it. Directors like Stanley Kubrick, James Cameron, and Ridley Scott have fed the idea that AI will lead to robot world domination. Or maybe it was Avengers: Age of Ultron that did it for you.

Regardless of your aversion to AI, there’s no stopping its constant innovation.

Facial recognition was born of the need for criminal identification. It’s had proponents since 1964. Experiments started with just a book of mugshots and funding from an “undisclosed intelligence agency.” It was there that Woodrow Bledsoe, a scientist from Oklahoma, rolled up his sleeves and went to work.

Bledsoe is called the father of facial recognition technology. The National Department of Defense and the National Institute of Standards and Technology (NIST) then funded the Face Recognition Technology (FERET) database.

The studies didn’t stop there. Between 1993 and 1996, 15 photography sessions of the same format were held. By the end of these sessions, 2,413 still facial images were submitted by volunteering vendors that represented over 850 individuals. These studies were the biggest effort toward facial recognition comprehension at the time — all in the name of national security.

Periodically, the NIST will conduct these tests to ensure the algorithms are as accurate as possible.

And here we are now, our faces the key to opening our phones. The technology behind it sure has come far. 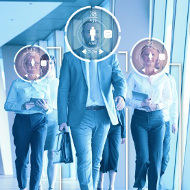 Facial recognition can definitely be intimidating, but it’s an efficient solution to a range of major issues.

No matter the reasoning behind your possible aversion to the technology, you can’t help but admit the market is hot.

There are plenty of ways facial recognition will secure certain aspects of daily life. And since all of us are shaking in anticipation for a post-pandemic world, let’s take a peek at some of the ways the industry is gearing up for it...

Leading in solutions for sporting events, Panasonic is currently ranked as a “buy” by Zacks Investment Research.

You’re probably associating Panasonic with televisions, which is what most people do. Panasonic released a recent case study involving a Danish football (soccer) stadium's deployment of a facial recognition system. The study showed the successful identification of individual biometrics, including those who were in disguise, all while following the EU’s privacy-protection regulations. Two years ago, this wasn’t possible.

Denmark claims it's experienced more crowd behavior problems over the past few years, so to prevent these issues, the stadium wanted to use facial recognition to identify blacklisted individuals. Panasonic upgraded its algorithms through deep-learning technology, allowing stadium security to now recognize a person’s face under sunglasses and a partial covering like a mask. Those who aren’t blacklisted have nothing to worry about since the system only stores blacklisted individuals.

We’re all aware of how buck wild sporting events will be post-pandemic. Therefore, an extra safety measure while maintaining the security of my personal information is alright with me.

2021 is also the year of big purchases for Panasonic. Last year, Panasonic acquired a 20% stake in Blue Yonder, a company that specializes in supplying the U.S. with software. But this year, Panasonic is apparently preparing to convert its 20% ownership into a full acquisition of the company.

This will be the biggest acquisition in over a decade for Panasonic. The last time it made such a large purchase was when it spent over $7 billion to own Sanyo Electric and Panasonic Electric Works.

Blue Yonder’s software is mostly AI-driven, making Panasonic even more of a technological powerhouse than it already is.

Since Panasonic’s P/E is around 14.10 and the industry’s is around 20.69, the company’s stock is slightly undervalued and is at a great selling point for all you raging bulls out there.

This Japan-based electronics company has overcome the hurdles the pandemic may have put in its way.

If this isn’t the perfect example of turning a negative into a positive, I don’t know what is.

In the official testing of its biometric technology, the NIST ranked NEC "high" in effectiveness. It’s so accredited that even border control uses NEC’s NeoFace technology to match travelers to their documents.

NEC recently signed a contract for its screening technology to be used in all five of Hawaii’s major airports. In addition to facial screening, temperature detection is provided for a better, more contactless passenger experience. 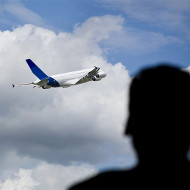 The expansion doesn’t stop there. Thanks to the long-time partnership with Lockheed Martin and NASA, NEC’s technology will be among the stars.

NEC’s SIAT will be able to detect ongoing issues in the spacecraft. This is what Motoo Nishihara, the CTO, member of the NEC Corporation Board, and executive vice president of NEC, had to say about the upcoming project:

We're thrilled that the innovative SIAT developed by NEC provides value to Lockheed Martin as it addresses not only the development of complex systems, but also the uniqueness of deep space exploration. Together, we are committed to strengthening our solution and finding new ways to apply this technology.

This will eventually lead to the continued application of AI in future space missions, ranging from ground support to possibly human-related systems.

With almost $28.4 billion in revenue announced on its website, NEC shares are hitting all-time highs of $62 apiece.

You can’t go anywhere in a car without any fuel, right?

You could say that AMBA is the peanut butter to facial recognition’s jelly.

As we inch closer and closer to autonomous driving, vehicles will require imaging sensors for biometrics. This is what puts the “smart” in a smart car.

Joaquin Nuno-Whean, vice president of hardware at Motional, had nothing but good things to say about the pairing:

Ambarella’s processors provide the AI performance, low power consumption, and advanced image processing necessary for the camera perception to perform well under all conditions. This supports the safe operation of our vehicles as we bring driverless technology to consumers worldwide.

According to the National Safety Council, 50% of traffic fatalities occur at night. Another study has shown that car accidents can increase by 16% at night.

If Ambarella's tech can reduce these statistics, this would be a huge win for AI. We may see more driverless vehicles sooner than later thanks to companies like Ambarella.

Its $62.1 million fourth-quarter revenue impressively beat estimates by analysts, who forecasted revenue of $57.7 million for the small company.

As the company continues to grow, you can definitely expect Ambarella’s heavy influence in both the semiconductor AND AI industries.

From your phone to national security and everything in between, you can’t knock AI and facial recognition tech for what it’s doing — and how much money it's making.

No matter how Orwellian it may seem, Homeland Security is seeing greater success rates as it continues to test facial recognition technology.

In a recent study, Homeland Security’s facial recognition tech proved to be 96% accurate. This was just on masked individuals. On non-masked individuals, the identification systems proved 100% accuracy.

Arun Vemury, director of the Biometric and Identity Technology Center at the U.S. Department of Homeland Security, says airport screening technology “may reduce risks for many travelers, as well as the frontline staff working in airports, who no longer have to ask all travelers to remove masks.”

We all know how much of a hassle airports can be, so cutting down the check-in and security time would be pretty cool. The quicker you move through an airport, the quicker you'll be on vacation.

Change is difficult, we’re not arguing that. Every invention came with rounds of scrutiny.

But three HUGE parts of daily life are going to be heavily affected by facial recognition and AI — it’s inevitable at this point. We might as well profit off it, right?

If I haven’t convinced you, maybe this recent piece from The Outsider Club will….

Our experts break down a few AI companies, which won’t just ease your AI anxiety, but also give you information on the industry that virtually no one knows.