Special Report: Nothing Generic About this $350 Billion Market

Nearly nine out of 10 prescriptions sold are generic.

And according to an SNS Research report earlier this year, the generic drug market is already worth $350 billion annually, and will expand at a compounded annual growth rate (CAGR) of 12% between today and 2020.

That is significant growth.

Case in point: the deal between Target (NYSE: TGT) and CVS (NYSE: CVS) that will see the pharmacy chain take over the box store's 1,600 in-store pharmacies in a $1.9 billion deal.

You see, the drug market has split in two directions: generics and expensive specialty drugs.

CVS dominates the generic market in the U.S. It has 9,000 stores and clinics. It's the largest buyer of generic drugs in the country.

And the deal with Target gives it additional scale to buy generics even more cheaply.

In early 2015, CVS bought Omnicare, a provider of pharmaceuticals in nursing homes, for $12.7 billion to start selling generics in its 160 locations.

The market is heating up and merger and acquisition activity is rampant.

I've been looking for a speculative way to play it. And I think I've found one north of the border.

The Canadian generic drug market is fast-growing, under-served, and rife with potential.

In fact, there's an up-and-coming company that's positioned itself to break the market wide open.

It's called VANC Pharmaceuticals, and it's so hot it started the year by shooting up more than 200%.

And that's just the beginning. Because even with that surge, VANC's market cap is still under $30 million.

It could get much, much larger...

You may not realize it, but Canada is one of the 10-biggest pharmaceutical markets in the world today. It accounts for 2.5% of the global market.

And it's growing rapidly.

Total pharmaceutical sales just about doubled from 2001 to 2013, reaching $22 billion.

And drug exports more than doubled in that time, soaring 155%.

But if you think it's the big-name drugmakers that are profiting, think again.

In Canada — and most other markets — it's all about the generics.

Generic drugs contain the same ingredients as their branded counterparts. They're just as safe and every bit as effective.

The only major difference is that they're cheaper.

As a result, they account for 66% of Canada's prescription drug market.

See, in Canada, doctors prescribe medication to be taken by patients, but it's the pharmacies that decide whether to supply the generic or branded version. And generic drugs are not only cheaper, but more profitable for the pharmacies.

As you can see in the table above, the generic version of a drug costs half as much as a name brand. That gives pharmacies a greater allowance for mark-ups, and thus, a higher return.

VANC Pharm has a portfolio of 30 drugs for both acute and chronic conditions, with 20 more in the pipeline.

The company doesn't develop these drugs, mind you. It simply licenses the molecules, essentially cloning the name brands.

Furthermore, the generic market is regulated in Canada, which means prices are set, giving VANC Pharm a gross profit margin of 70-75%. 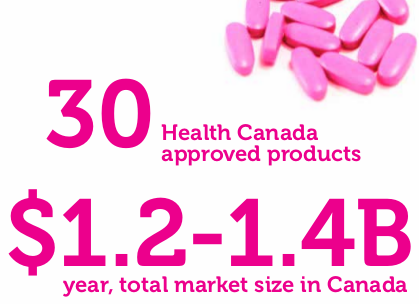 That's pretty strong considering the size of the market.

Indeed, VANC estimates that the market for its generic drugs is $1.2 billion to $1.4 billion per year.

The drugs have already passed through testing, production, and packaging.

The only step left is selling them to pharmacies.

And that shouldn't be a problem, since VANC Pharm is the only generic drug supplier in Western Canada and its products come at a steep discount to rival brand names.

In fact, it's already struck a deal with one Western Canadian pharmacy chain. And more are sure to follow.

As with its generic drug portfolio, VANC Pharm has other OTC products in the pipeline, as well. More vitamin supplements and skin-care ointments are on the way.

In all, the company estimates these OTC products have a market of $60 million to $70 million a year.

To sum it all up, there are three main questions that will determine this stock's potential, and the answers are all positive.

VANC Pharm has cash though the middle of this year, and expects to generate $4 million in 2015 revenue. First inventory build and first revenues are expected in the current quarter.

It has already secured 35 generic molecules to sell, and is targeting 50 by the end of the year.

It's already selling to 20 pharmacies and is targeting 40 by the end of the year.

It has brought in a sales director and a new board member to make this happen. And it will also bring on 10-15 sales reps by year end. That new board member is a powerhouse in the Canadian pharmacy market, owning nine or ten himself. These, of course, will become customers.

With 52 million shares out, currently trading at C$0.49/US$0.42, VANC has a market cap of C$29M. That's fairly valued for forward sales projected at $4 million this year, giving it a six-times sales multiple, which is standard for the industry.

I firmly believe that a higher stock price will follow as more pharmacy chains start to sell VANC Pharm products.

Big things are in store.