Special Report: How to Invest in Rare Earth Metals and Profit

Rare earth metals are at the core of every major technology today.

They're also widely used in defense technology, like jets and guided missile systems.

Neodymium, dysprosium, praseodymium, and terbium, for example, are all used in high-strength permanent magnets. They are used in virtually every modern vehicle and aircraft, and they improve efficiency and reduce size and weight.

The guidance systems used by missiles and smart bombs rely on the fluorescent properties of terbium, europium, and yttrium oxides.

The smartphone in your pocket?

It contains as many as 11 rare earth metals; there are 17 in all, but some people quibble over semantics and definitions. The numbers might be a bit confusing depending on interpretation, but the rapidly rising demand is not. 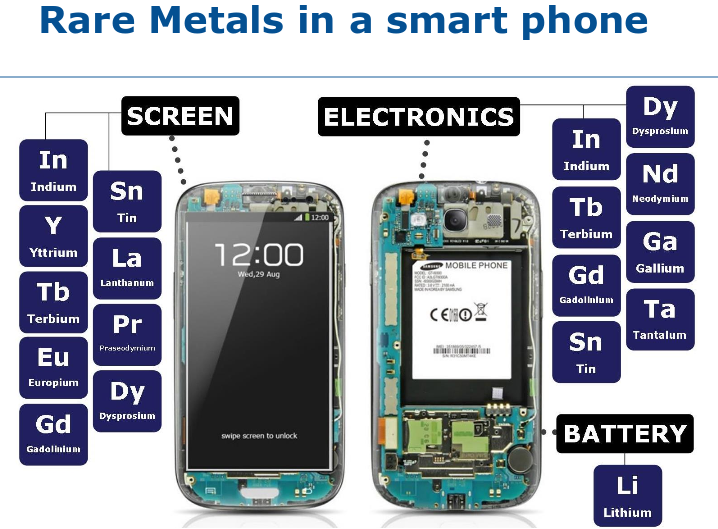 Such dominance has created a volatile market — one that China can manipulate at will.

Let’s take a look at what rare earth metals truly are and how this unique market will pan out in 2021.

We’re not going to do a full-blown chemistry lesson here, but there are some concepts that are important to know.

First up, here are the 17 rare earth elements on a periodic table. The only thing to remember is that as you move between positions in the periodic table, you find different properties. Elements in different rows and columns have shared properties, some bind better with other elements, and the demand for elements is purely driven by their usefulness in very specific ways.

Here is a look at them: 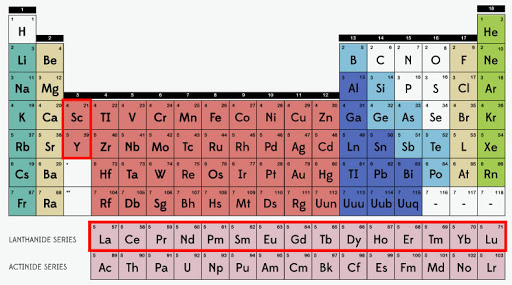 Each of the 17 rare earth elements highlighted above is unique in its own ways. Some are far more useful than others.

You’ve probably also heard that rare earth metals are not really rare. That is both true and wildly incorrect. They are, on paper, not really rare at all, but in practice they’re a nightmare to collect.

There are tons of these 17 elements scattered throughout the ground. Their rarity is based on extremely low ore grades. In other words, there are no juicy, thick veins of these underground like there are for some other commodities and elements, like coal or gold.

As such, you have to move a lot of dirt to even get access to trace amounts. It is doubly hard because of the processes involved. It takes a lot of really nasty chemical catalysts to sort through all the fodder, and there isn’t any good way to make the whole process efficient and clean.

We’ll get to the implications of this in a bit.

For now it’s just good to know that some of these are not like the others, though they get lumped together. Some will never be more than a byproduct of companies hunting for some of the other rare earth elements.

Those byproducts just get dumped on the market, and that will probably never change.

For example, no one is scrambling to secure a supply of yttrium oxide. That’ll probably never move past $3 per kilogram. Gadolinium oxide, though? $160,000 per kilogram looks reasonable in the near term.

The only thing that really binds the whole group of 17 rare earth elements together as a group are some basic properties and the nature of the refining process to get a chunk of them worth selling, and it’s a not a pretty one.

In 1992, the Chinese president, Deng Xiaoping, was famously quoted saying that “the Middle East has oil; China has rare earths.”

Since then, the country has sought to systematically bring the world’s rare earth sector under its umbrella of state-owned companies.

In 1995, China bought Magnequench, the largest American rare earth magnet company, which was based in Indiana. In doing this, China took control of the most important portfolio of rare earth patents in the world.

In 2010, China tightened its export quotas, shrinking supplies to the rest of the world. And China also imposed duties of 15–25% on its rare earth products.

Prices for rare earth metals (and their corresponding stocks) shot through the roof as a result.

That alone was problem enough. But this was also a matter of national security. Rare earth metals are an integral part of cutting-edge civilian and military technology. The F-35 fighter jet, for example, contains nearly a half ton of rare earth metals.

As tensions cooled, China relaxed its regulations and rare earth prices crashed back down. This devastated rare earth companies outside of China.

The biggest example of that is what happened to Molycorp.

Once America’s top rare earth producer, the company ran up $1.7 billion of debt when China restricted rare earth supplies in 2010.

But it was unable to service that debt when prices crashed back down. Molycorp filed for Chapter 11 bankruptcy protection in 2015 and now focuses on refining rare earth metals, as opposed to mining them.

What happened with Molycorp is a prime example of what can go wrong for rare earth metal companies. China demonstrated its capacity and willingness to make sure its hegemony can and will be maintained.

There is some room for opportunities in the rare earth element sector outside of China, but it isn’t clear-cut.

For one thing, governments — including the United States government — seem to have learned that China is less than reliable as a partner.

As a result, governments have issued directives to prioritize domestic rare earth production.

The U.S., EU and other countries have expressed a profound interest in securing their own production. However, it will not be at market rates. A premium will be paid for basic economic scaling and the costs of production.

The biggest risk for that cost of production? Pollution. Rare earth mines and refineries spew out huge amounts of toxic chemicals that are incredibly expensive to sequester and dispose of, especially when it comes to surface water and groundwater contamination.

This strategic concern has opened up new opportunities for investors, who can now reenter the rare earth segment at the ground floor, but they have to assume that a premium will be paid for the supply from Western sources that are far more concerned about the environmental cost of REE production, and that introduces government intervention through tariffs and socialized business investment.

There are some companies out there that have a good shot at producing critical rare earth elements at scale that can work on the open market, especially with some price controls.

The first company investors should look at is the Vancouver-based Leading Edge Materials Corp. (TSX-V: LEM).

Leading Edge Materials is the 100% owner of the Norra Kärr rare earth element deposit. Located in Sweden, Norra Kärr is one of the world’s principal heavy REE resource. It’s uniquely endowed with the most critical REEs: dysprosium, terbium, and yttrium.

It is the only notable heavy REE deposit within the European Union, and it has the capacity to supply all of Europe’s heavy REE requirements for more than 20 years.

The mine is surrounded by nearby infrastructure, services, electricity, supplies, and skilled labor, which give it the lowest construction capital requirements among its peers of large and long mine life heavy REE projects.

Ucore has 100% ownership of the Bokan deposit in Alaska. That’s the highest-grade heavy rare earth project in the U.S. And in addition to the federal effort, the Alaska Legislature opened up to $145 million of bond issuance in the Bokan project at the discretion of the Alaska Industrial Development and Export Authority (AIDEA).

Rare Element Resources Ltd. (OTC: REEMF) is another Canadian company that operates in the U.S. It’s Bear Lodge project in Wyoming is in its early stages. It still needs to demonstrate processing at scale for its raw ore, which may be make or break for the company.

Rare earth elements are commodities that are critical to our future. Smartphones, cars, jets, missiles — anything new and shiny seems to need them.

But the devil is in the details for the mining operations, and China always looms as both a cause for more investment and an investment risk as it moves to secure its market dominance.

2021 will be a continuation. Investors will fundamentally need to consider what every country except China is willing to pay at a premium to secure their own supplies outside of the global market that China dominates.

Investors will also need to consider if China will choose to flex its muscles and limit how it supplies the world, especially considering it may only accelerate its loss of market share.

We’ll keep watching the sector closely and let you know as soon as there’s a clear catalyst that can cut through this adversarial deadlock. Stay tuned.