Special Report: Fiber-Optic Stocks: Profit at the Speed of Light

The world is going fiber.

Whether or not you realize it, most networks you use — cell phones, TV, Internet, etc. — employ some form of fiber-optic network.

The only thing left is what the industry calls the “Last Mile.”

That's the final stretch running directly into your home.

And that's what's about to change.

Soon, all networks will be fiber from end to end.

Fiber is much faster and less expensive than traditional cable.

If you're reading this report, it means you're on the Internet.

That much is certain. What's uncertain, however, is how quickly you were able to navigate your web browser and how long it took for this document to download onto your device.

I hope it happened quickly, but I also know that for many Americans, it took a lot longer than it should have.

You see, some 19 million Americans can’t access high-speed Internet because they live in areas that private companies deem too expensive to serve. In all, a third of the country is missing out on high-speed Internet access — either because it's unavailable or cost prohibitive.

Furthermore, even in places where high-speed Internet is available, it's slow and expensive.

Just take a look at this list of the world's 10 best-connected countries... 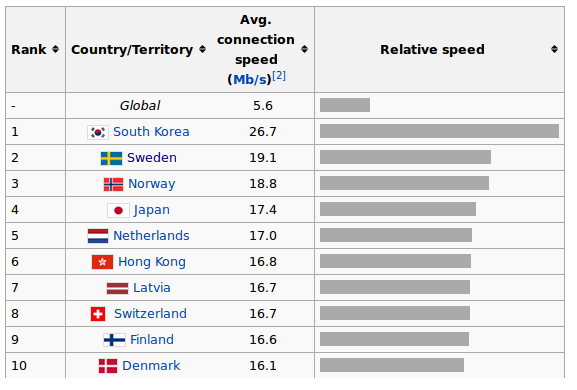 You'll note the United States isn't on it.

That's because the United States ranks 14th in Internet download speeds, behind Belgium, the U.K., and Romania.

The countries on this list are wired with fiber.

Fiber-optic cables are flexible strands of pure glass — each the diameter of a human hair — woven together that transmit voice, data, and video in the form of light signals.

It is up to 100x faster than traditional cable and wireless technologies.

It's time the U.S. and Canada are racing to catch up to the rest of the world.

The good news is that we're starting to.

Google is one of the companies at the forefront of the Internet revolution.

In 2012, the company began rolling out Google Fiber — a network that provides the kind of new speed we're talking about.

The fiber optic-based “Giga Net” delivers speeds of 1 Gigabit per second. That's 100 times the speed of a typical broadband connection.

Whereas a Gigabit means data transfers at 1,000 Megabytes per second, your typical high-speed Internet connection from a cable provider offers speeds of 105–150 Mbps.

Six more cities — Salt Lake City, San Antonio, Nashville, Atlanta, Charlotte, and Raleigh-Durham — are all slated to receive the service in the next few years. And nine more cities are potential candidates. 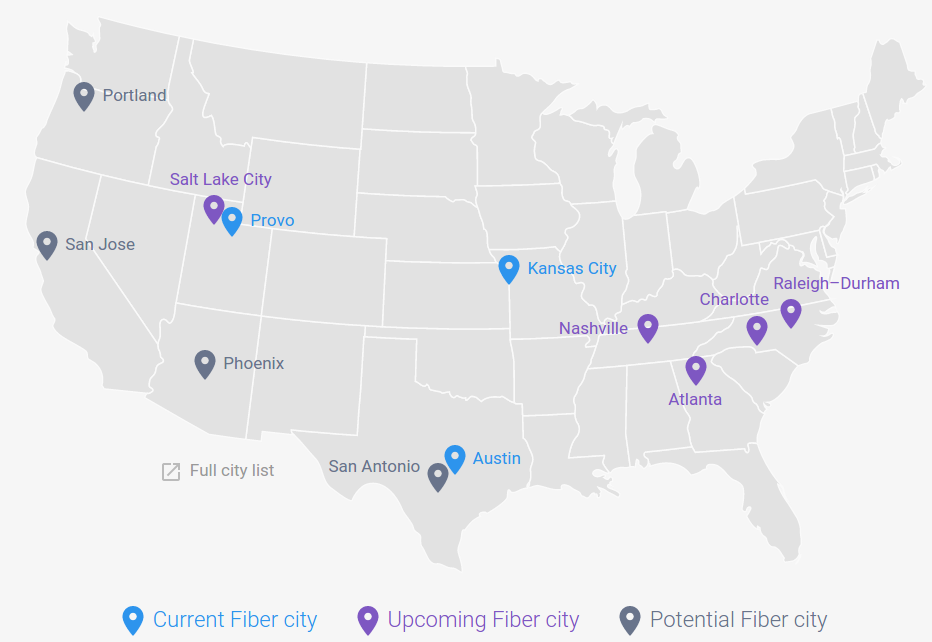 Another city, Chattanooga, Tennessee, has taken matters into its own hands. A few years ago, Chattanooga rolled out its very own fiber-optic network offering Giga Net speeds for just $70 a month.

In doing so, it had to fight off lawsuits from Comcast and local cable operators that actually wanted to keep the Internet slow and expensive.

But it was worth it.

Chattanooga officials say the network has helped spark a burgeoning local tech scene and the relocation of a number of businesses, drawn by its speed and reliability.

Hunter Lindsay, regional director of IT services firm Claris Networks, said his company moved its data center operations from Knoxville to Chattanooga "just because of the network."

No surprise, the trend is taking hold.

This is the future. And shockingly, it's still reached just a tiny fraction of the American landscape.

So what stocks should investors be looking at?

To begin with, there's always the big players.

I already mentioned Google, but you might also consider a company like Netflix. Netflix will certainly see its subscribership grow as more people gain access to lightning-fast Internet speeds.

Having said that, here are some more direct fiber optics plays:

Alliance Fiber Optic (NASDAQ: AFOP): Alliance designs, manufactures, and markets a broad range of high-performance fiber optic components. That includes cables, connectors, adapters, splitters, and couplers, among other things. The stock has a median one-year price target of $20, which would be a 42% improvement from where it currently trades at $14 per share. It also pays a $0.15 dividend, good for a 1.07% yield.

Oclaro Inc. (NASDAQ: OCLR): Oclaro is a manufacturer of optical components, modules, and subsystems. The stock just hit a five-year high of $9 after topping earnings expectations in its most recent quarter.

Indeed, Oclaro has routinely turned in strong earnings reports. They're mostly being driven by stellar growth in the company's 100 GB segment, with carriers like Verizon and AT&T upgraded their metro networks.

In additon to the its U.S. business, Oclaro also has operations in China, which is on track to grow into a massive market.

Looking at a trend of consolidation in the fiber industry, many analysts expect Oclaro will be bought out by a rival, like Finisar (NASDAQ: FNSR).

The stock has surged 260% in the past year, and is up 150% since we first recommended it last year.

Ciena Corp. (NYSE: CIEN): Ciena is a network specialist focused on expanding its customers' networks while reducing the cost to do so. Its major clients are telecoms, cable operators, and government entities.

It recently paid $32 million for TeraXion's indium phosphide and silicon photonics technologies. These are key components in Ciena's WaveLogic chipset. Currently trading around $23, the stock's average short-term price target is $27, with a high estimate of $32.

All of these companies stand to benefit from the Giga Net and fiber-optic expansion.

But the best fiber optics stock of all is probably Lite Access.

Lite Access was founded in 2003 and controls a best-in-class proprietary micro-ducting technology for laying fiber-optic cable.

You see, fiber-optic cable can be delicate. It needs to be protected from things driving over it. From extreme heat in California. From extreme cold in Alaska.

The traditional way fiber is installed is by digging deep trenches from where it's coming from to where it needs to go, and splicing it along the way. This is expensive. It takes a long time.

And every time the fiber-optic cable is spliced it loses speed — which is the exact opposite of the goal.

However, with Lite Access's product, the installer simply cuts a tiny trench just a few inches wide with a construction saw (no giant trench, minimal traffic disruption and footprint). Then a conduit is laid.

Then the fiber-optic cable is blown through the conduit with compressed air right to its endpoint — your home or office.

This can be done five times cheaper than traditional installation and at 1/10 the cost. It's completely weather- and waterproof.

And that's why Lite Access is emerging as a leader in the space.

It was Lite Access's fiber that connected the Winter Olympics in Vancouver. Google chose Lite Access to deploy its fiber network at Stanford University.

It's laid the fiber at Johns Hopkins University — one of the top medical institutions in the world. It's laid the network for the Baltimore Police Department, also in my hometown.

Lite Access has laid fiber for Verizon and Homeland Security as well.

Its product and process are proven and used by some of the largest and best universities and tech companies in the world.

The primary market is the “Last Mile" of fiber-optic installation we talked about earlier. It blows fiber-optic cable right up to its endpoint in homes, offices, hospitals, cell towers, and schools. It's already established itself as the go-to technology for many of the largest North American telecom companies.

Lite Access has deployed thousands of miles of micro-duct fiber in North and South America, the U.K., Caribbean, and Asia.

To be clear, Lite Access does not actually install fiber-optic cable itself. Rather, it provides the product to installers around the world and trains them on how to use it.

Amazingly it's done this with only two full-time employees.

This model allows Lite Access to have very lean selling, general, and administrative expenses (SG&A). It also allows rapid expansion in multiple countries without having to proportionally increase its operational team and overhead.

Lite Access commenced trading on June 1, 2015, on the Canadian Securities Exchange under the ticker LTE. It raised $1.85 million in conjunction with that.

They will likely double (or more) again this year.

With the funds from the recent IPO, Lite Access can now scale at an extremely rapid pace. I expect it to do that, and the stock to follow suit.

Almost every major telecom company in North America is testing its products.

In addition to what I've already told you, Lite Access has also laid the fiber networks in New York's Central Park and on the Las Vegas strip.

Make no mistake; this is a big trend, and it's only getting bigger. Lite Access is at the top of the list, as far as I'm concerned, but there are plenty of other stocks to choose from if you're looking to go in a different direction.