Special Report: Creativity Is Key: The Dexterity of the ESports Market

Getting creative is the name of the game these days.

Finding ways to move about the world in a cautionary manner in contrast to what we were used to previously definitely calls for us to think outside the box.

Like one domino after another, we see the effects of the incredibly high demand for online gaming, which is already at a high point, soaring even further.

Unlike traditional sports, eSports is in a better position to adjust to the changes thrust upon society by the coronavirus and similar outlier events.

While physical sporting events were put on hold, canceled, or underwent restrictions, eSports managed to thrive and gain popularity.

The gaming experience overall is one that is ever-changing; retail is becoming less reliable and online shopping is the safer route — in theory.

Who has actually been able to find the PlayStation 5 available for sale anywhere online?

In-store displays of the Xbox Series X? Forget about it.

Even if you’re lucky enough to come across any of the consoles, they’re being pawned off for twice their price on third-party websites.

And they’re being sold.

This puts pressure on gaming, where there is a massive audience that scrambles to hop on from one trend to the next.

The one-time purchase of the latest consoles are a plus to larger companies like Sony (NYSE: SNE) and Microsoft (NASDAQ: MSFT), but smaller companies, like the ones mentioned below, which continue to provide on a regular basis are a better bet.

ESports is in the public eye as well: David Beckham is dabbling in the market, and he’s a huge contributor to one of the most profitable physical sports leagues in the world.

Sponsorships and advertisers see the eSports market as a field day, a form of entertainment that will be their online billboard for the entirety of the pandemic and then some.

Game publishing companies take advantage of the diversity within the gaming community, considering each demographic that contributes to the market. 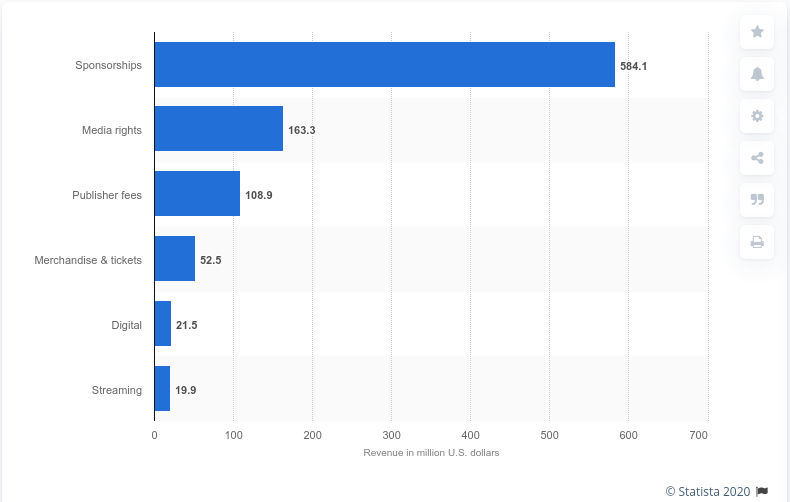 A Much Bigger Picture

As 2020 comes to an end, eSports are reported to have reached $1 billion in revenue. Sponsorships and advertisements have accounted for $636.9 million of revenue in 2020 — up from $584.1 million in 2019, according to reports from Newzoo and Statista.

Advertising revenue isn’t the only form of eSports income to make leaps in the coming years. In the same study by Newzoo, the world’s most trusted and quoted source for eSports analytics and insights, it announced streaming revenue would reach $31.6 million by 2023. For the record, streaming revenue in 2020 was $18.2 million — that’s a 73.6% increase projected in revenue. Although streaming accounts for the lowest amount of eSports revenue, it is encouraging to see it following the same positive trend as sponsorships — especially when that positive trend results in tens of millions of dollars.

But eSports revenue isn't the only thing growing rapidly...

The internet population is a vast, ever-expanding channel of connectivity.

So who is that audience?

According to a study by GamingStreet, the median age of U.S. eSports viewers is 29, and the 25–34-year-old age range makes up 39% of the eSports audience.

This is a big help since that demographic is one that consumes — these people are well into the age where they have their own disposable income in contrast with younger age groups.

But that billion-dollar revenue can’t be obtained from just one age group.

In Japan, the first senior-only eSports center was opened, a learning center and gaming hub for ages 60 and older.

A good amount of U.S. players are actually part of the older demographic; 51 million players are over the age of 50.

The wide spectrum of ages the world of eSports caters to obviously pays off in its fast growth.

One age group doesn’t stick to just one game, either. A game like Minecraft has different versions that cater to audiences ranging from age 7 to senior citizens.

So now that there is a better understanding of the diversity of the eSports audience and how much room this market has to grow, the reasoning behind looking into eSports as an investment becomes clearer than ever.

Three ESports Stocks to Grow With the Trend

This video game holding company has been quite the contender in the eSports market.

It's behind extremely popular games such as World of Warcraft, Call of Duty, and Candy Crush. Three very different games with channels in which to play them: Warcraft is mainly PC-based, Call of Duty is more played on consoles such as PlayStation and Xbox (though not excluded from PC), and you’ll find Candy Crush in your phone’s app store.

These three alone rack up over $1 billion in annual net bookings.

Mind you, that’s only three of the SIX major franchises Activision owns.

Boasting an increase of 46% year over year with $0.78 earnings per share, Activision is expecting to hit over a billion dollars in annual bookings.

Admittedly, the third quarter of this year has been a little tough compared with the quarter before; there was a 38 million-person decrease in monthly users.

That being said, there is a huge likelihood of a turnaround thanks to the holiday shopping season peaking and two large game releases on deck.

One was Call of Duty: Black Ops Cold War, breaking records in making the highest digital sales in the history of the 25-game franchise.

This may be because the game supports cross-platform play, so it's more inclusive. Those who play in groups (which is two-thirds of the Call of Duty gaming audience) can interact over their preferred consoles and PCs without hassle. 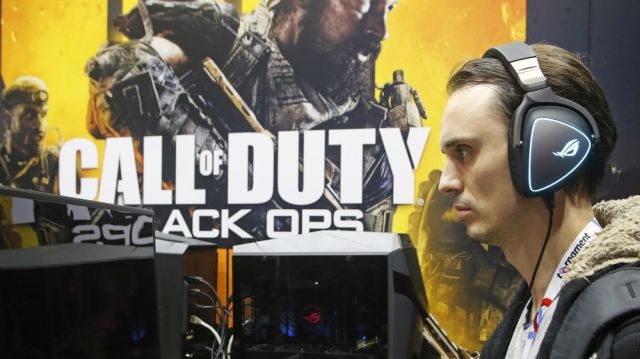 Not only is EA responsible for the NHL, MLB, FIFA, UFC and NFL games, but it is also the maker of the Star Wars games.

The company behind the making of the games for the most-watched physical sports and the game adaptation of one of the most popular movie franchises in history is surely one not to forget.

And it’s sure to withstand whatever hardships 2020 has brought it.

Then it jumped to $120 — actually 12% from where it started this year although its valuation can be as high as $147 per share.

In the past year, EA’s revenue growth came solely from live services, which provided an increase from $3.36 billion to $3.9 billion.

Some big game launches were set back, like FIFA 21’s intended September release being pushed almost three months later with only the pandemic to thank for that.

Though not nail-bitingly crucial, it does gum up the works on quarterly numbers since EA relies on about 28% of total net revenue to come from FIFA.

Seven-million customers have bought FIFA eSports games this quarter is a huge help that can compensate for the later release date, as well as the 20% growth in Madden NFL game sales.

There is a 2021 release intended for EA’s Battlefield franchise — a game not only intended for the new consoles that have just been released, but one that is also said to be mobile-accessible.

Over the last six months, GameStop's shares have quadrupled in value.

As a retailer in 2020, that’s pretty impressive since in-person shopping is a huge no-no these days.

Up 500% in value from March, the month when retail was thought to not live out the pandemic, GameStop has kept its head above water this year.

GameStop is keeping up with the ebbs and flows of the transition toward more digital routes for gaming as well.

It has kept up with other eSports-related companies by making consistently smart plays such as focusing its online promotions on the new XBox and PlayStation consoles.

Revenues are said to have taken a hit as well; $1.1 billion has been racked up so far this year, but that’s still almost 23% less than the revenue GameStop earned at this time last year.

Remember, GameStop is pulling out the smart plays here. This includes partnering with TV maker Vizio.

Twenty-five different Vizio TV models, as well as other Vizio products, are offered through GameStop. GameStop is incentivizing customers to purchase these Vizio products by offering a $50 gift card to customers along with these purchases.

This is a good start — there’s no question the future of gaming is digital and this partnership displays the initiative to adapt. 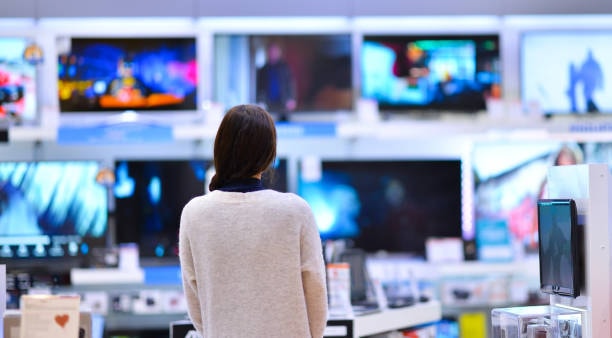 Livestreaming platforms are one of the main channels to interact in eSports, and Huya is a company on the rise that is poised to rise even higher.

Based in China, Huya may experience quite the uphill climb in the years ahead, but it seems equipped for the challenge. In the third quarter of 2020, Huya’s revenue increased 24% year over year, and its net income increased a whopping 105%. It has over 170 million monthly active users and almost 10 million paying users.

Although Chinese stocks have been a "question mark" for American traders during previous presidential administrations, companies like Huya look promising moving forward. Perhaps the biggest thing Huya has going for it is the backing of a major player in the eSports market. One of Outsider Club's very own, Jimmy Mengel, has been digging into eSports for some time now and he's found some exciting stuff — including more on Huya's relationship with this big player.

You see, Jimmy has a knack for sniffing out the next big trend. He did it with cannabis stocks back in 2016, he's doing it with hydrogen fuel cells right now, and he believes eSports could be a trend even BIGGER than cannabis and fuel cells. These aren't the kind of claims he throws out frequently, either. So when he takes the time to flesh out a research report, you know it's worth checking out.

The market for eSports isn’t showing signs of slowing down anytime soon, and investors who act sooner rather than later stand to gain the most.

While traditional sports are losing popularity and being met with hurdle after hurdle, eSports can’t seem to grow fast enough.

The multiple ways these different companies adapt to be inclusive among multiple demographics makes this market incredibly unique — and profitable.

Online gaming also nabs another advantage with more and more people across the world working remotely and attending school online.

ESports knows adaptability; the companies heavily involved in the market only see opportunity in the future, even when they face a blip on the radar during their fiscal quarters.

There’s enough demand in the community to back these companies during lower points, and it doesn’t hurt that the community is growing so large.

Even after the pandemic ends, eSports tournaments will return.

That return will see further advancement in the market and benefit eSports even more in the long run.