Special Report: Craft Distilling: The Hottest Trend in the Liquor Business (And the One Way to Play It)

The craft beer sector has absolutely exploded. I could probably make an argument that it’s actually peaking right now.

But the craft liquor market is just getting started.

It’s heating up in a big way. And it’s time to get in.

Despite the craft beer craze, beer lost a portion of its share of U.S. alcohol revenue in 2015 to liquor for the sixth consecutive year and the 12th time in the past 15 years.

Trends shift. And right now, the booze market is trending toward liquor (as opposed to beer and wine) in general and toward craft liquor in particular.

The signs are everywhere.

Jose Cuervo just went public in February 2017 with an IPO of approximately $900 million. It had been private since 1758.

A whiskey ETF was just launched in Fall 2016.

That whiskey ETF, for example, counts Diageo (23%), Pernod Ricard (12%), and Brown-Forman (6%) among its top holdings. Those are multibillion-dollar behemoths that own some of the world’s top brands like Captain Morgan, Smirnoff, Tanqueray, Jack Daniels, and more...

But that’s not where the liquor growth is coming from. Instead, it’s coming from high-end, local craft distillers.

There's a way to play that market.

And one way is with Eastside Distilling, Inc. (NASDAQ: EAST)...

Why Craft? Why Eastside?

New research from analytics firm Mintel finds that craft spirit debuts have increased by some 265% globally between 2011 and 2015 and that around half of the growth was driven by U.S. craft distillers.

According to the Wall Street Journal from March 2017:

Up until about five years ago, you'd have been hard pressed to find an American single-malt—the term for a whiskey (or, in Scotland, whisky) made from malted barley at a single distillery. But U.S. distillers are fast learning they have several advantages in this category. The Pacific Northwest is a world-class growing region for two-row barley, the variety used in Scotland. Scotch whisky is traditionally aged in used oak barrels—a practice that significantly extends aging time. Stateside, most distillers use the new charred-oak barrels bourbon is aged in, yielding a spirit that's smooth, rich and ready for consumption after as little as two years' time, compared with 10 or more for Scotch.

Distilleries are tinkering with cask materials, yeast strains, and barley varieties as they begin defining a distinctly American style: 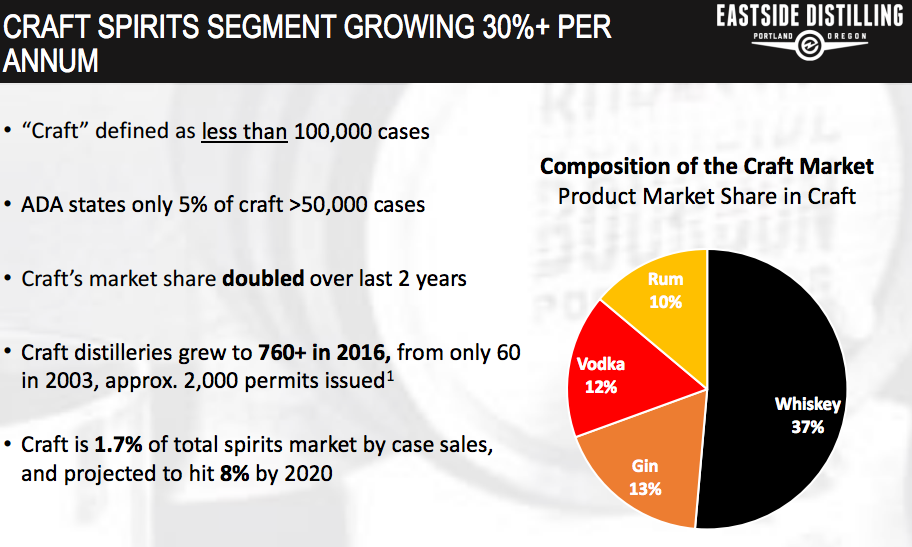 That defines the opportunity with Eastside exactly — a small craft distiller in the Pacific Northwest that has award-winning spirits.

Eastside Distilling also happens to be a very well-run public company with fast-growing sales and highly strategic shareholders that I think could rise by many multiples if it executes as planned during this craft liquor boom.

Here’s just a taste of what it's been up to:

Outsider Club, Copyright © 2020, Angel Publishing LLC & Outsider Club LLC, 111 Market Place #720, Baltimore, MD 21202. For Customer Service, please call (877) 303-4529. All rights reserved. View our privacy policy here. No statement or expression of opinion, or any other matter herein, directly or indirectly, is an offer or the solicitation of an offer to buy or sell the securities or financial instruments mentioned. Angel Publishing and Outsider Club does not provide individual investment counseling, act as an investment advisor, or individually advocate the purchase or sale of any security or investment. Subscribers should not view this publication as offering personalized legal or investment counseling. Investments recommended in this publication should be made only after consulting with your investment advisor and only after reviewing the prospectus or financial statements of the company in question. This letter is not intended to meet your specific individual investment needs and it is not tailored to your personal financial situation. Nothing contained herein constitutes, is intended, or deemed to be – either implied or otherwise – investment advice. Neither the publisher nor the editors are registered investment advisors. This letter reflects the personal views and opinions of Nick Hodge and that is all it purports to be. While the information herein is believed to be accurate and reliable it is not guaranteed or implied to be so. Neither Nick Hodge, nor anyone else, accepts any responsibility, or assumes any liability, whatsoever, for any direct, indirect or consequential loss arising from the use of the information in this letter. The information contained herein is subject to change without notice, may become outdated and may not be updated. Nick Hodge, entities that he controls, family, friends, employees, associates, and others may have positions in securities mentioned, or discussed, in this letter. No part of this letter/article may be reproduced, copied, emailed, faxed, or distributed (in any form) without the express written permission of Nick Hodge or the Outsider Club. Unauthorized reproduction of this newsletter or its contents by Xerography, facsimile, or any other means is illegal and punishable by law.