Special Report: Copper Capital: How to Invest in Copper & Profit

I recently took a leisurely walk through the Green Mount Cemetery in Baltimore, a few blocks from my office. It's a sprawling graveyard filled with some of Baltimore’s most famous — and infamous — residents.

It was established in 1839 and is one of America’s first “rural” cemeteries. As I strolled around the headstones, I noticed quite a few that stood out.

But the single most interesting one was a small, unmarked grave. Once I saw the sun shimmering on the dozens of pennies that covered it, I knew I had found the right place… 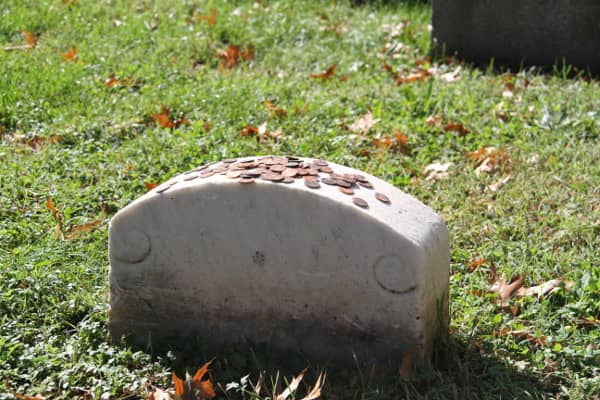 It was the grave of John Wilkes Booth, presidential assassin and one of America’s most notorious criminals. Every day visitors stack pennies, heads up, on his grave. It is said to help “lock the assassin in the ground.”

That’s giving the humble penny quite a lot of credit, but to be fair, I haven’t seen Booth stalking the streets of Baltimore lately.

Of course, pennies used to be made of copper, known in some circles as the "Eternal Metal." But since 1982, they’ve been minted from 97.5% zinc with a pure copper coating that takes up the other 2.5%. Copper is simply too expensive to justify a $0.01 piece.

It’s a damn good thing they stopped when they did, because copper prices have exploded since then and are now riding all-time highs. In 1982, copper dipped to $0.60 a pound.

This Industry Could Push Copper to New Heights

Electric vehicle (EV) engines are really loaded with the stuff.

With that in mind, it’s worth considering what the recent explosion in the valuation of the EV industry means for copper. Over the last five years, no less than five EV stocks - Tesla, Lucid Motors, Rivian, Li Auto and XPeng - have achieved returns of more than 500% each.

And this growth isn’t expected to slow down in the 2020s. A December 2021 KPMG survey of auto executives found that on average, respondents expected 52% of new vehicle sales in the U.S., Japan and China to be all-electric by 2030.

The growth of the EV industry is certainly a bullish sign for copper, but the metal would be worth investing in even without it.

Copper briefly soared to an all-time high of $4.90 a pound back in April before correcting back down to around $3.50 per pound. Before the pandemic sparked a price surge in 2020, we hadn't seen copper break the $4.00 mark since 2011.

Given the breakneck growth speed of the EV industry and the world's slowly reawakening economy, I have no doubt copper will continue to run higher into 2023 and beyond.

But copper is important to far more industries than just EVs. Some could argue it's the most important metal on Earth.

China, the world's largest consumer of copper, has decided that COVID lockdowns are a fact of life now. Some of the country's largest manufacturing centers are either shut down completely or under harsh restrictions, resulting in historically low copper stockpiles.

Considering China accounts for an unbelievable 54% of the world's copper usage, that's a major hit to the market. We haven't seen supplies this tight in more than a decade.

Some industries in China have slowed down, lessening demand. But a huge portion of them are still running full-tilt, even under lockdown. Their solution is drastic, but effective: some factories have locked in employees, subjecting them to mandatory screenings and quarantine.

To put it simply, China is almost single-handedly sending copper prices through the roof.

On the supply side, major producers like Chile and Peru are reporting supply shortfalls, and Richard Adkerson, chief executive officer of miner Freeport-McMoRan Inc., said that current copper prices don’t yet reflect the “strikingly tight” physical market. There's a major squeeze coming in the near future, which will almost certainly carve out a new record high for copper prices.

If that weren’t enough, Russia’s war against Ukraine continues to wreak havoc supply chains. Russia accounts for a small but not insignificant 4% of total copper production worldwide, but exports have largely taken a backseat to Putin's "special military operation".

The invasion of Ukraine has also caused a massive increase in energy prices. Smelting copper requires an enormous amount of power, so every extra dollar is passed directly on to the buyer.

If you thought $5 per pound was unheard of, get ready for a truly unprecedented price surge.

There are a few easy ways to play this supply/demand disturbance that should continue for the rest of the year: You can invest in the miners that produce it from the depths of the Earth, or you can bet on the actual price of the metal going forward.

If you don’t want to bet on one horse, or even two, you can also bet on the entire industry itself. The Global X Copper Miners ETF (COPX) holds both of those companies in addition to 37 other copper stocks. COPX offers a steadily increasing 3.82% yield, a 52-week range of $26.01–$47.23, and an average daily trading volume of 509,693 shares.

Speaking of short versus long term, copper is a cyclical commodity. While 2022 has been a great year based on the current marekt climate, the supply/demand situation should balance next year. RBC Capital analysts are expecting that exact scenario and have predicted prices holding strong at $3.50 a pound throughout 2023.

But he didn’t stop there…

Snowdon went on to foresee copper reaching $50,000–$100,000 a tonne! He bases that incredible prediction on the fact that while there are only 1.5 million tonnes of copper used today in EVs, charging infrastructure, and the entire renewable energy sector, by the end of the decade, that could be closer to 7 million tonnes.

When we look at the outlook for the copper market over the course of the next three, five, 10 years, what we see are essentially impossibly large deficits developing over that time frame. By the middle of this decade, we’re forecasting the largest ever deficit in the copper market. This market has such severe imbalances that they’re not resolvable at current price levels.

That’s the crux of the issue in the copper market. It’s just an impossibly tight future. At today’s price, there’s no fundamental adjustment underway that that can meaningfully solve what lies ahead.

While that seems like a wildly bullish picture, the fact remains that we’re going to need more copper in the years ahead, and you should certainly hold some in your portfolio.

But speaking of materials that are crucial to electric vehicles, there is one rare resource that every car company in the world will need to survive — and it’s NOT copper. It's not even lithium, platinum, cobalt, or nickel. In fact, you've probably never heard of it before.

However, it is absolutely critical to the entire industry going forward. Elon Musk himself said, "It’s the way all electric cars in the future will be made."

My colleague Luke Burgess just discovered a $1 company that just secured 100% of the rights to mine the largest reserve of this resource right here in the Western Hemisphere. The possibilities will be endless once this new battery becomes the industry standard.

Here's everything you need to know.

Happy investing, and thank you subscribing to the Outsider Club!