Base metals are absolutely crucial to the global economy.

Copper, lead, aluminum, nickel, and zinc are all used in a wide range of industrial applications.

However, that doesn't necessarily make them slam-dunk investments.

These are working-class metals, after all, cheap and abundant.

And right now, the market is working against them.

The truth is, the global economy is wobbly, the dollar is rising, and base metal champion China is weaker than it's been in years.

Indeed, base metal prices have been depressed by overproduction and sluggish economic growth.

Still, it's not all doom and gloom. These metals may be down, but they're not out. To the contrary, there could be some real bargains hiding out in the sector.

Here's a closer look at the market dynamics and what profit opportunities there are...

A Case Study in Copper

Any number of factors can influence the price of base metals.

The strength of the U.S. dollar, for instance.

You see, commodities across the board are denominated in dollars, so if the greenback strengthens, they lose value.

A stronger dollar negatively impacts base metals, as well as noble metals, like gold and silver. It also affects other commodities like soybeans, corn, coal, and oil.

Speaking of which, oil can also have an impact on base metals.

Still, the main drivers of commodities prices will always be supply and demand.

And right now, supplies are high.

Chile, the world's largest copper miner, forecasts its copper production to total 5.94 million tonnes this year, up from 5.8 million tonnes in 2014. The country mined 2.43 million tonnes of the red metal from January through May, a 2.3% increase from the same period a year earlier.

Chile accounts for more than one-third of global copper production, but others are advancing, as well. That includes neighboring Peru — the world’s third-biggest producer — which says its output will rise 13% this year, and 66% in 2016.

It's not just copper, either.

China has increased its output of other base metals, as well. 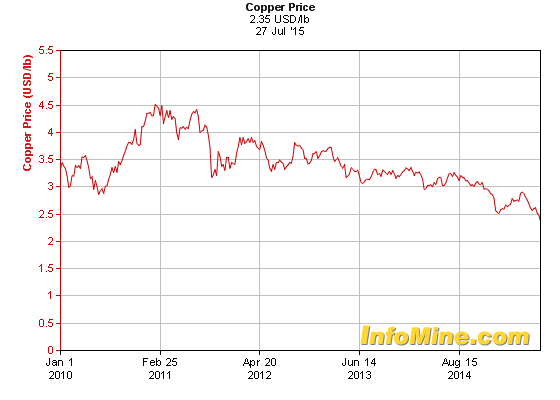 China is also the world's biggest base metal consumer. As such, it has tremendous sway over their respective prices.

Indeed, China's stalling economy is another big reason for a recent pullback — not just in copper, but all base metals.

The International Monetary Fund (IMF) showed the country's GDP at 7.4% in 2014 and projected it would decelerate to 6.8% this year.

That's a problem, because China, alone, accounts for 40% of the world's copper consumption. The country's imports have fallen more than 12% over the past year.

That's a pretty good indication of where base metals are at the moment.

Is there anything positive?

Copper's struggles are indicative of the headwinds facing base metals in general, but it's also the worst performer of the bunch.

Nickel and zinc are up against the same obstacles, but unlike copper, they've got positives, as well.

Nickel, for instance, has been affected by an export ban in Indonesia. Prior to the ban, Indonesia accounted for 34% of world nickel supplies. That's about a third of the supply that's come off the market.

Furthermore, Nickel has been selling below $6 per pound on the London Metal Exchange. Mining the metal simply isn't profitable at that level, which means supplies will contract further as mines close down. 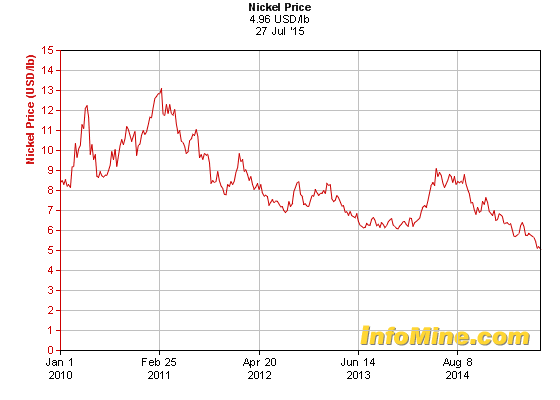 Given those two factors, it's likely that nickel will rebound over the next year, returning to $8 or $9 per pound.

Zinc, meanwhile, is benefiting from a supply shortfall, which is expected to exceed 151,000 tonnes this year.

Of course, both of these metals are difficult to forecast, because they're traded in such small volumes. That means greater price volatility.

Worse, investors don't have many options outside of the futures market, which is exceptionally risky.

Still, there are options. One way is through ETFs such as the iPath Dow Jones UBS Industrial Metals ETN (JJM), or the PowerShares DB Base Metals Fund (DBB).

JJM is designed to provide investors with exposure to the Dow Jones-UBS Industrial Metals Subindex Total ReturnService Mark. The index reflects the returns that are potentially available through an unleveraged investment in the futures contracts on industrial metal commodities.

It is currently composed of four futures contracts on industrial metals, three of which are traded on the London Metal Exchange and the other of which is traded on the COMEX division of the NYMEX.

Meanwhile, DBB seeks to track the DBIQ Optimum Yield Industrial Metals Index Excess Return, which is intended to reflect the base metals sector. Currently, it consists of Aluminum, Zinc and Copper.

Now, if you're looking for actual miners, the best options would be mining giants Rio Tinto (NYSE: RIO) and BHP Billiton (NYSE: BHP).

BHP is among the world’s largest producers of major commodities, including coal, copper, iron ore, nickel, and uranium. It also has substantial interests in oil and gas. The same is true of Rio Tinto, which has assets in Australia, North America, Asia, Europe, Africa, and South America.

These two juggernauts have operations vast and diverse enough to withstand this downturn. And they will be the first to profit when a rebound eventually comes.

And of course, a rebound will come, because China will take steps to boost its growth, and other emerging markets will benefit from a buyer's market where prices are low.

Rio is down more than 30% over the past year, while BHP has shed 46% of its value. But together their earnings still total more than $20 billion. They also pay lofty dividends.