The truth is that no one really knows where oil prices will go from here. But the general consensus is that we’ll see prices around or a little over $60 per barrel for the foreseeable future. More bullish analysts are expecting a climb to $80 a barrel.

Here’s the good news behind those numbers...

Over the past year, oil stocks, refined product storage, and floating crude storage have all dropped. This was necessary for oil prices to rebound since they’d long been hampered by a supply gut.

However, less production, higher demand, and a detente in OPEC have created a new multi-year stability for oil stocks.

We can see this by looking at the Energy Select Sector SPDR ETF (XLE), which is weighed heavily towards major oil and gas producers: 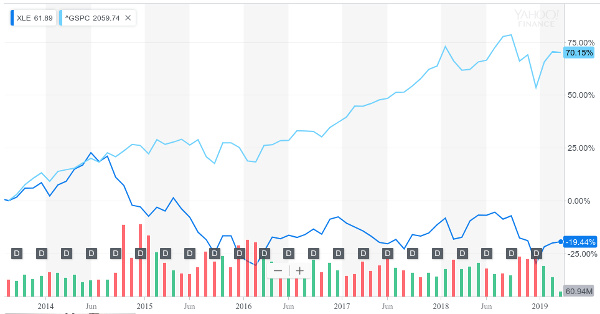 After diverging from the broader market (represented here by the S&P 500) and taking a beating over five years ago, oil and gas companies hit a bottom in 2016 and have largely retained shareholder value while offering some returns in the form of dividends.

Again, it’s not clear just how sustainable oil’s price action is. But it is heading in the right direction, and most analysts expect the momentum to carry forward through 2019.

So, having said that, here are the 2019 oil stocks that investors ought to consider...

There are multiple ways to play a rebound.

The former generally corresponds to any movement in the price of oil. But the latter is leveraged to provide twice the return of any oil price rise. This makes it a more dynamic play moving forward.

Of course, oil companies are another way to go.

One company that we like is EOG Resources, Inc. (NYSE: EOG).

EOG is one of America’s biggest shale producers with prime positions in the Eagle Ford, Bakken, and the Permian Basin. Its focus in recent years has been on streamlining operations to boost drilling returns so it may thrive on lower oil prices. 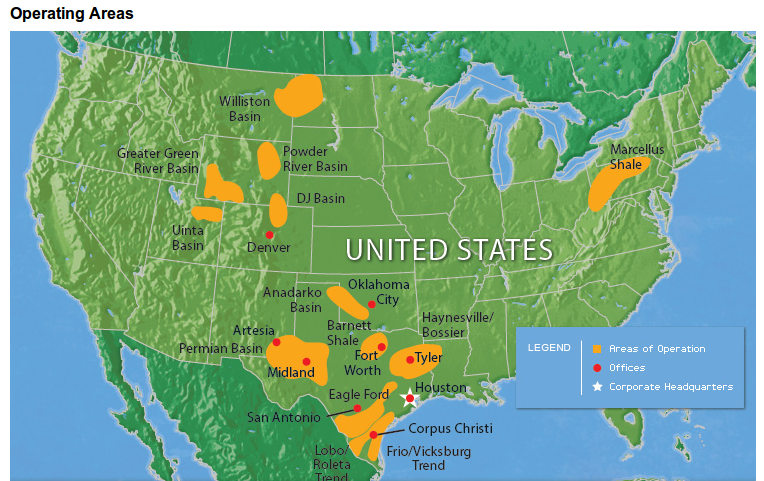 EOG has pushed costs down and output up. The net result is that it controls a vast inventory of premium wells, which are wells that it could drill to earn a 30% rate of return with oil as low as $40 per barrel.

With oil over $50 per barrel, the returns on EOG Resources' premium wells double to 60%. And as a result, the company is generating more cash flow, which puts it in the position to deliver 15% compound annual oil production growth through 2020.

Since oil has moved up even further, there’s been a slew of bullish upgrades.

Morgan Stanley, for example, upgraded EOG stock from equal weight to overweight and has raised its price target from $97 to $106 per share. The bank said that EOG has climbed to the top of the heap, putting it above Devon, Pioneer, and other U.S.-focused drillers. Meanwhile, Imperial Capital gives it an outperform rating and a $115 price target.

The stock is currently trading around $94 per share. And if oil prices continue to move up, you’ll be seeing share prices shoot far beyond analysts’ estimates.

That put the company comfortably ahead of its five-year plan.

When Encana unveiled its new five-year plan in 2016, the company thought it could deliver a 60% increase in output by 2021. Furthermore, it thought that it could achieve this growth rate while living within cash flow as long as oil averaged $55 a barrel. But now, the company believes that it only needs oil to average $50 a barrel to give it the fuel required to achieve its production growth target.

And Encana says its return on capital will climb to between 10% and 15%. It's also aiming to deliver 25% compound annual growth in non-GAAP cash flow and $1.5 billion of cumulative non-GAAP free cash flow.

Kinder Morgan, Inc. (NYSE: KMI), for instance, is the largest energy infrastructure company in North America. It controls 70,000 mi. of pipelines and 152 terminals. 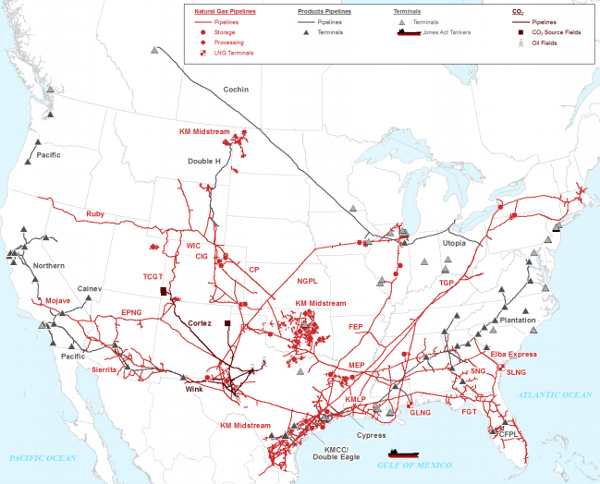 The thing about KMI is that its stock fell off a cliff in 2015 when oil prices crashed and credit tightened in the energy sector. When the credit dried up, KMI was forced to divert its cash flow into debt reduction and capital expenditure.

It’s since rebounded to about $20 per share, and it’s fair to expect a return to the hefty dividend increases that made KMI an investor favorite to begin with.

The company has already increased the dividend several times in the last couple years and is planning more in 2019 and 2020. Plus they were paired with a multibillion-dollar stock buyback program. This has pushed the dividend yield back up to 4% with shares at $20.

This means that investors may buy Kinder Morgan for a bargain price and then rake in a rapidly growing income stream over the next couple years.

It has six marine storage terminals with an aggregate capacity of 27 million barrels and 1.5 million barrels per day of dock capacity. That's beneficial because storage is still in high demand.

This is key because U.S. exports of refined products are at their highest level in years.

As with KMI, MMP provides a tremendous income opportunity. Its partnership structure is designed to pass value directly onto unit holders.

However, unlike KMI, MMP also has one of the highest credit ratings and lowest levels of leverage in the industry. Its distribution has been increased annually for an impressive 18 years, as a result: 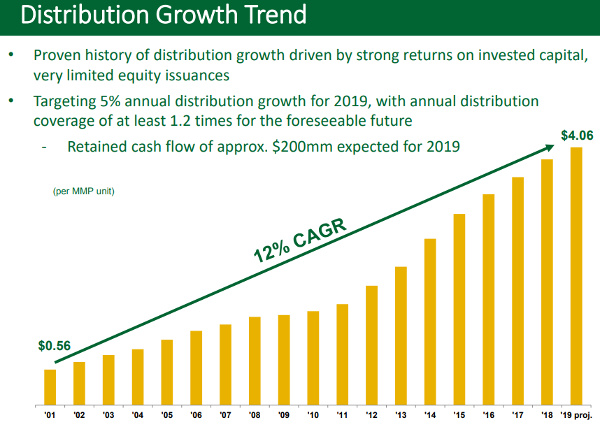 All of these stocks are primed for a stellar year.