These days, Americans can’t agree on much — but we can still rally against a common enemy. And it’s hard to think of a bigger common enemy than Big Tech.

Yet their approval ratings are deep underwater.

A poll released in late July by Change Research found that each of the above companies have net unfavorable ratings among both Republicans and Democrats — and that a majority of survey respondents from both parties are open to breaking them up. Gallup polls have also shown that Americans’ opinions of Big Tech are worsening over time… 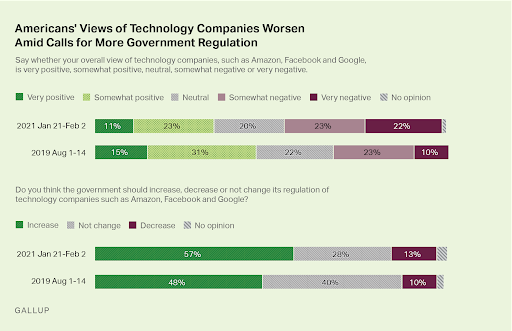 A major regulatory action against Big Tech has been low-hanging political fruit for years now.

Former President Trump started to take advantage with his 2020 executive order weakening social media companies’ legal protections, but President Biden — or more specifically his appointees — are really going in for the kill…

Biden’s Appointees Are out for Big Tech Blood

Lina Khan is a lawyer and academic who rose to prominence in 2017 when she wrote the viral Yale Law Journal article “Amazon’s Antitrust Paradox,” in which she argued for regulators to move beyond the “direct consumer harm” antitrust framework and challenge platform-based business models like Amazon's before they run smaller players out of the market. 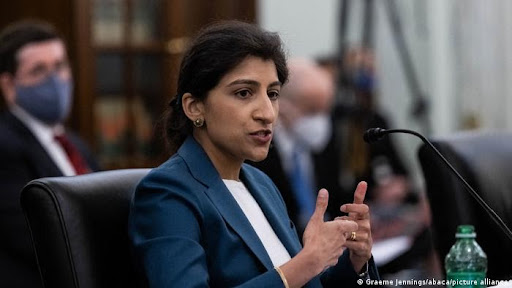 In June, President Biden appointed 32-year-old Khan as head of the FTC, making her the youngest chair in the Commission’s history. Since being confirmed and taking office, she has used her new authority to launch several legal salvos at Amazon, including an investigation of its pending acquisition of movie studio MGM.

Amazon is clearly scared of Khan; back in June it filed a request with the government seeking for her to be recused from all Amazon-related investigations given her open hostility toward the company.

Jonathan Kanter is another lawyer who came to prominence by making an enemy of Big Tech — but while Khan did so in a law journal, Kanter did so in a courtroom. He has represented complainants who have sued Alphabet subsidiary Google for anticompetitive behavior, including rivals Yelp and Microsoft. 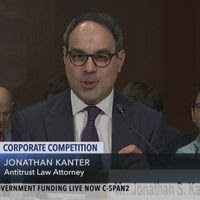 Back in July, President Biden announced that he would nominate Kanter to lead the Justice Department’s antitrust division as Assistant Attorney General.

He has not yet taken office, but when he does, he could be very bad news for Alphabet given the competition-related lawsuits the company is already facing. More on that in a moment.

In this political environment, the once-unthinkable notion of the federal government forcibly dismantling America’s largest tech companies feels plausible. Public opinion is squarely behind it — and the president is appointing lawyers who seem ready to do it to high government offices.

The not-so-distant past actually provides a useful example…

Some of our readers may remember this actually wouldn’t be the first time in living memory that the federal government broke up the largest tech company in America.

In 1982, the Justice Department forced AT&T (NYSE: T), which was then the monopoly provider of telephone services and equipment in the U.S. and Canada under the “Bell System,” to break itself up into a collection of independent telecommunications companies (Regional Bell Operating Companies, or colloquially called “Baby Bells.”)

The current prospect of a Big Tech breakup presents a similar opportunity — but this time, investors don’t have to wait around for shares of the “baby FAAMGs” to become available.

There are already several companies that have been slowly and steadily chipping away at Facebook's, Amazon's, Google's, and Microsoft’s market shares.

Until recently, these companies weren’t for faint-of-heart investors. They’re scrappy and have solid business models and growth rates, but just a few months ago, their dreams of defeating the FAAMGs in the market seemed a lot like Don Quixote’s dream of defeating windmills in combat.

Today, that’s changing. With the government and the public firmly in their corner, the four tech underdogs profiled below finally have a real shot at dethroning their Big Tech rivals — and thus any new antitrust measures from the Biden administration could make their share prices pop.

DynamoDB is one of the most popular features of Amazon Web Services (AWS), the internet giant’s biggest profit-driver. It powers Uber’s rider-driver matching engine, for instance.

But a growing number of DynamoDB customers are defecting to MongoDB, saying that the upstart is cheaper and more flexible than its larger rival. And in the event that Amazon is forced to separate AWS from its other businesses by an antitrust ruling, DynamoDB would likely be left with even fewer resources to compete with MongoDB’s rapid rise.

Even without help from the government, however, MongoDB has been growing rapidly. In the most recent quarter, it grew revenue 43.7% year over year.

As you can see, MongoDB shares have been on a wild ride in the last year — and got a major pop around the time of Amazon-hater Lina Khan’s appointment in June. Any more Amazon-antitrust-flavored news from her office could send MongoDB shares upward again.

Founded in 2007 and based in New York City, Taboola is a digital advertising company. It runs an online ad network that competes with Facebook Ads and Google AdSense.

Facebook and Google parent Alphabet both derive the vast majority of their revenues from these advertising platforms — and they’re also currently getting sued by multiple levels of government for blatantly running an advertising cartel.

Since then, two different groups of state Attorneys General have filed suit against Google for anticompetitive practices in its advertising business.

One, led by the state of Texas, involves an obviously corrupt arrangement between Google AdSense and its smaller rival Facebook Ads, under which the latter would withdraw from certain market segments in exchange for better pricing in ad auctions from the former.

Taboola just completed its IPO in July, so fundamental data on the company is scarce. We do know that it has grown revenue by 22.9% year over year as of the most recent quarter and that it has a very low 12.4% debt-to-equity ratio.

Shares are down slightly since their midsummer debut, but this is a dip investors should seriously consider buying. Taboola is the biggest publicly traded alternative to the Google-Facebook duopoly, and any progress in the lawsuits against that duopoly could be great news for Taboola shareholders.

Founded in 2012 and based in Bozeman, Montana, Snowflake is a cloud-based data warehousing and analytics company that competes with Amazon’s Redshift suite of services.

Amazon Redshift is another major AWS revenue driver; it’s used by many Fortune 500 companies, including Magellan Health and Nasdaq. But like DynamoDB, Redshift is suffering from a customer exodus as organizations complain that they can get more sensible pricing and better scaling capabilities outside of Amazon.

Many of Amazon Redshift’s customers are leaving for Snowflake, which uses an innovative pricing model that separates data storage services from cloud computing services, allowing customers to pay only for what they use of both services (Amazon Redshift, by contrast, bundles the pricing of both into unwieldy, one-size-fits-all plans).

A broken-up AWS might not be able to afford to compete with this model.

Snowflake has more than doubled its revenue in the last year, and it has a negligible debt-to-equity ratio of 3.9%.

Shares have cooled somewhat since their IPO last year, but like MongoDB shares, they got a pop in June when Khan was appointed — and could pop again if her legal challenges against Amazon move forward.

Founded in 2007 and based in San Francisco, Dropbox is a provider of cloud-based personal file storage services that compete with Google Drive and Microsoft OneDrive.

After years of lagging behind Google Drive, Dropbox became the largest provider by market share around the end of the 2010s. It’s also the only pure-play file storage stock on the market.

Since then, Dropbox has struggled to keep Drive and OneDrive at bay; its two larger rivals have the benefit of integration with a wide range of other services offered by their respective companies (e.g., Gmail and Microsoft Office).

In the event that these services are spun out as separate companies as a result of an antitrust ruling, they’d lose their main competitive edge against Dropbox — and the company would become effectively unchallengeable in the file storage space.

In the meantime, Dropbox is profitable on an earnings basis and has grown its earnings per share (EPS) by a whopping 400% year over year as of the most recent quarter.

Shares have been on a tear this year, but good news from the government’s various legal battles against Google could send them higher still.

These four companies could be the tech giants of tomorrow — they just have to slay the current group first (or wait for the government to do it for them).

If you’re interested in a newsletter with a proven track record of helping readers get ahead of new technology trends, check out The Crow's Nest. Editor Jimmy Mengel is currently sitting on an average gain per trade of more than 40%. Click here to learn more.