Gold has always served as a hedge against inflation.

The second-largest spending bill in U.S. history, signed by President Biden, gave gold a more optimistic layout for the rest of 2021.

We have already seen spikes from geopolitical dramas and standoffs, the lockdowns, and plenty of other events as well. Headlines will always drive short-term increases, which tend to quickly fade away, but fundamentals will carry the long-term trend.

Looking at the fundamentals, there is a strong case that gold is far from done with its record-breaking highs. Let’s dive in and take a look..

Gold Versus the Dollar

Historically, gold has been closely tied to the relative buying power of the U.S. dollar as the de facto global currency.

A whole lot of factors weigh into the important relationship between gold and the dollar as a result, with the inflation rate being a primary driver.

The price for gold has increased rapidly, but when adjusted for inflation, the purchasing power of an ounce of gold isn't far from where it was in 1980.

Gold has to be at around $2,000 per ounce to match the purchasing power of an ounce back then.

Gold, for our purposes, is an investment. As such, we should give a lot of weight to the price of gold compared with other broad investment metrics as well.

Another way to look at it is this is that gold is competing with other investments only for dollars that people are willing to invest.

Now that the economy is on the precipice of reopening, gold is predicted to withstand the inflation that is bound to follow.

That brings us to another classic way to look at the price of gold relative to the Dow Jones Index. See the chart below: 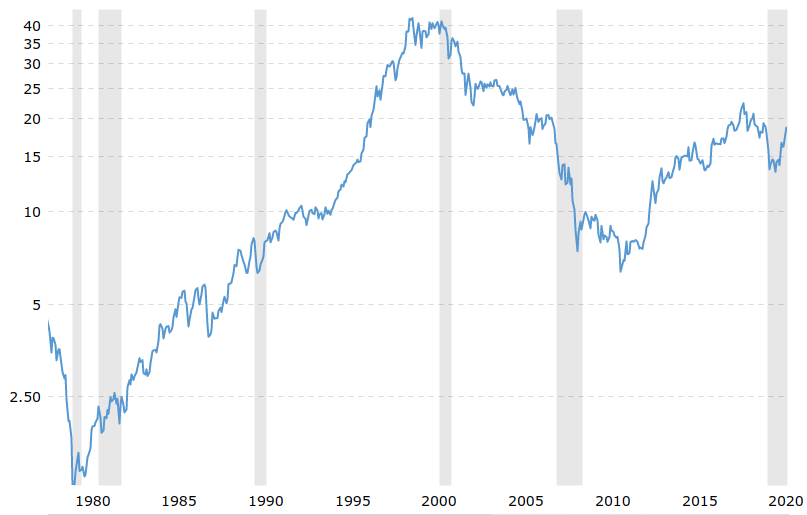 In July 2020, the ratio was at 14.5, making it clear that we’re not close to gold being relatively expensive.

One of the biggest bull markets in stocks in our lifetime was birthed from the recovery of the Great Recession. Since then, gold has still outperformed the stock market.

A distinct difference between the two is that there seems to be a shorter holding period on SPY than GLD. 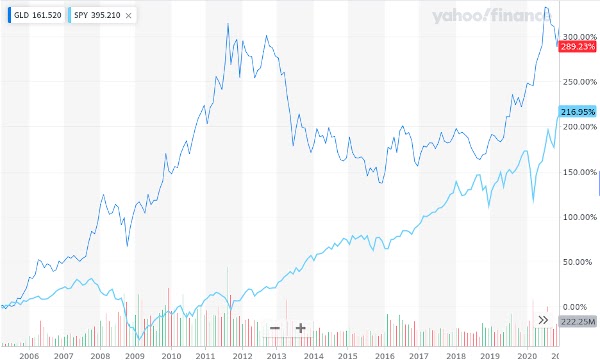 As you can see, GLD has had a decent decade. This explains why SPY’s holding period is smaller as well.

SPY is tracked on the S&P 500, so investors find it easier to move in and out of.

GLD, on the other hand, is the first market that invested in physical gold. In early January 2021, the number of outstanding units in GLD increased from 400 million to over 405 million with a $726 million inflow. This was an impressive 1.0% week-over-week gain.

SPY hasn’t flown under the radar either — in mid-February, it experienced a 2.2% increase in outstanding units and an estimated $7.7 billion inflow.

In the past five years, SPY has increased 92.5% in share price.

GLD has increased at 34.82% in share price over the past five years.

Investors pulled money out of gold and into equities in early March.

No talk of gold prices and investments should ignore a key feature of gold mining stocks — what is effectively a leveraged play.

All gold miners have a breakeven point where their cost to produce gold matches their revenues. Dip below that, like we’ve seen in recent years, and it can turn into a bloodbath. Look back just a couple years, and we can see plenty of evidence of that, with debt blowing up and causing drastic changes for even the major gold producers.

We’re entering a period in which that has reversed and gold prices actually create a profit-multiplier.

Mid-August peaked for gold — the trading price range bobbed between $1,850 and $1,920. At the end of December, the average all-in sustaining cost to mine gold was almost $1,000 per ounce. This means that companies with the same average cost could be finding themselves making $850–$920 per ounce of gold.

In February, the annual gain gold producers saw was the highest in 2.5 years.

Gold companies rarely sell anything at spot prices. Long-term contracts and other costs dictate their “wholesale” prices but also get rewritten.

Sustained higher gold prices will be trickling into projections and negotiations in coming quarters and are going to make the best gold miners cash-printing machines.

Finally, we should also look at long-term cannibalization of reserves.

Gold producers are facing an existential crisis without massive investments in exploration or the companies that are finding the best new deposits. 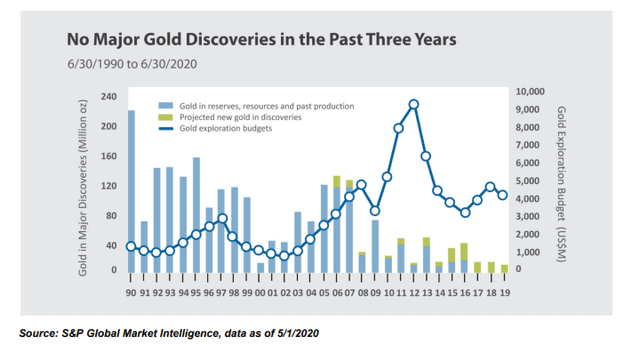 On average, it takes a good decade of further drilling and development to get a new gold mine up and running, and that average is only increasing.

This will create a squeeze on supply as demand is increasing while also increasing the premium the major gold producers will have to pay to acquire smaller companies. It's a one-two punch.

2020 was a volatile year. Economic data were mixed. Stocks are expensive. The Fed is taking on trillions of dollars of liabilities, and the government's debt and yearly deficit are spiraling out of control.

That makes gold a strong candidate as both a safe haven and as an investment with a lot of catalysts and factors that will push prices higher.