Remember When COVID Wasn't the Biggest Threat to Crowds?

I don't know about you, but I've been in lockdown so long I've almost forgotten what normal life was like.

I know I used to go to bars, concerts, and sporting events. And I know it was fun. The thought of being in a crowd didn't always give me chills.

But then there was something else wasn't there?

I'd almost forgotten until I saw this unfortunate story a few days ago...

I'd gotten so wrapped up in the nostalgia for the bygone days of group hangs I'd forgotten the latent fear that some psycho could indiscriminately open fire at any given moment.

Sure don't miss that.

Nevertheless I don't want to dwell on the tragedy of it all. It's too sad, too bleak.

I'd much rather talk about solutions.

Namely, a company that's out there making the world safer from lunatic shooters and even from the coronavirus.

It may not be a pleasant discussion, but it's an important one.

You see, a few years ago I caught on to a really interesting company — one that makes facial recognition software, like the kind you might use to unlock your phone.

However, the twist is that the software is hidden away in digital ads — marquees, kiosks, and billboards that display ads on their screens.

That alone would be an intriguing business model. After all, the digital ad market is still nascent, at less than $1 billion currently. But it’s forecast to grow to more than $32 billion by 2025.

But what’s really unique, interesting, and comforting about this particular facial recognition software is that it can identify security threats, too.

That could include known terrorists or at-large criminals whose mug shots can be found in a database. And if it recognizes those individuals it can immediately alert the authorities.

It can detect weapons, too.

In fact, it has more than 500 types of weapons in its database. It can tell if you’re carrying a gun, knife, or even a bomb.

Now, I know invisible robot guardians may sound like science fiction, but they're very real.

And so are the results.

This technology is being deployed all over the place, and without anyone really knowing.

Even when I was watching Super Bowl LV, I was reminded of how this very software was deployed at Mercedes-Benz Stadium in Atlanta to help safeguard the big game in 2019.

Indeed, monitors just like these stood outside of Super Bowl LIII inconspicuously searching passersby for weapons and ne'er do wells. 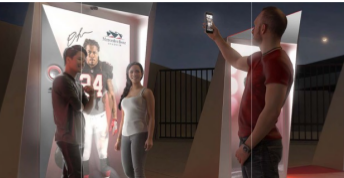 Those that passed these kiosks had no idea they were being scanned for weapons.

The same goes for thousands of other concert-goers, convention attendees, airport travelers, and retail shoppers that have happened by similar products.

And the tech was all produced by one company.

It's even helped reduce crime across Mexico City, and the company behind it just inked a deal to help safeguard schools and hospitals.

Better still, recent upgrades to the software have enabled it to scan body temperatures and enforce social distancing requirements.

So the same technology that is scanning large crowds for terrorists and weapons is also on guard against the invisible enemy, COVID-19.

And I've got news for you: It's not going anywhere.

Even after COVID is gone, safety measures like this will be retained to guard against the next pandemic, as well as violence.

Given all that, it's no surprise that the stock behind these cutting-edge safety solutions has surged more than 400% since I recommended it back in November.

Of course, you could be forgiven for thinking that with a climb of that magnitude, you've probably missed the boat.

But you haven't. Even with that surge, this company is still small and hardly known.

It's flying under the radar just like its technology does.

So I'd strongly suggest you get my full report here.

Because at some point we will return to "normal." But that doesn't mean we'll live in peace.