Zion Williamson is currently the best player in college basketball, and is only a freshman.

He is expected to be drafted number one overall in the NBA draft this summer.

Analysts have said he is slated to make over $1 billion over the course of his career, with an expected shoe deal worth $100 million by itself.

There’s only one problem…

During a Duke game a few weeks ago, the Nike basketball shoe on Zion’s left foot completely tore apart as he planted his foot to make a hard pivot. He went down hard, injuring his knee in the process. 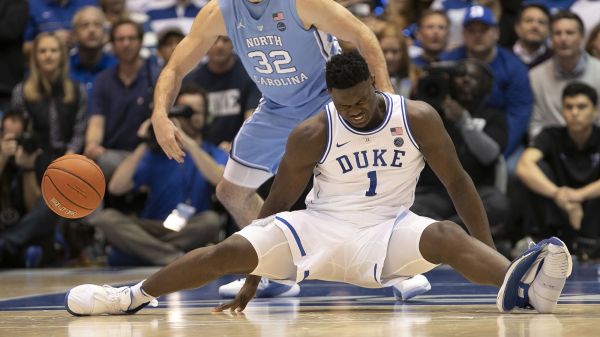 Let’s talk about the monetary implications of that.

First, Nike (NYSE: NKE) stock lost over $1 billion in market cap the next day. A college basketball player fell down and a company lost a billion dollars in value as a result.

There’s potential salary at stake. If the injury means Zion is drafted fifth in the NBA draft instead of first, millions of dollars of annual salary would be lost.

There is insurance for just that reason. Zion has an insurance policy that would pay him $8 million if he isn’t drafted in the top 15.

There is the contract between Nike and Duke, which is private but reportedly worth tens of millions. Will Duke renew with a company that produced a shoe that blew apart on the court?

New technologies are now being deployed to keep elite athletes safer while collecting data to help improve their performance.

Players in the NFL, for example, now have sensors in their helmets and pads that measure the force of impact. They can also keep track of a player’s speed and position on the field.

But in order for technology like that to help players in all sports, it needed to be improved. It needed to be made smaller and cheaper.

A basketball player doesn’t have a helmet or shoulder pads in which to embed sensors.

With this new technology you could print a sensor right onto a basketball shoe. It could monitor speed, location, and impact in real time, and store the data for later analysis.

So when Zion’s shoe blows out… you’ll know exactly how much force he was exerting on that foot, and can recreate the exact situation that led to it. That will help in the treatment of the injury, training for future avoidance, and the creation of a better shoe.

And that’s just one potential use.

This new field of printed electronics, or what I’m calling “smart chips,” is just now starting to take off. It’ll be used to track shipping logistics… printing tracking devices right into the label!

It’ll be used in advertising to create interactive graphics… It’ll be used to print labels into high-end brands to avoid theft and counterfeiting. The uses for this new technology are endless.

And there is one 30-cent company with multiple patents on this technology.

The rollout is underway now.

Click here to see the tech in action and get details on the company behind it.

Whole Weed?
It is easy to forget with all the explosive growth in the marijuana sector how far it could really go. Whole Foods CEO weighs in on what his company wants...
Money Flooding Into Gold
2019 is finally the year we see a real breakout in the gold space. Outsider Club Mining expert Gerardo Del Real discusses what investors can expect from gold in 2019...
Mr. Dines On Pot: Don't You Want Money?
"The Original Pot Bug" discusses his investment strategy and outlook for the rapidly expanding pot sector. Mr. Dines discusses why pot sales will exceed tobacco, liquor, and beer combined — and relatively soon, believe the unbelievable or not.
Heal Your Ailing Portfolio Body